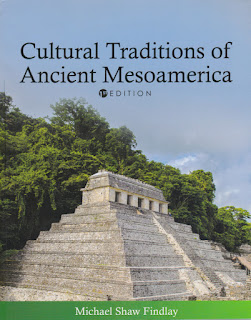 Retired Butte College and Chico State anthropology instructor Mike Findlay has long held a fascination with, and love of, Mesoamerica, "central southern Mexico and the northern portions of Central America, including the Yucatan Peninsula." It's the home of ancient traditions like the Maya, Olmec, Zapotec, Aztecs, and others. Now, in a new book, Findlay brings a scientist's eye to examine the long history of growth and decline of these storied cultures, from ten thousand years ago to Spanish colonization beginning in the fifteenth century.

"Cultural Traditions Of Ancient Mesoamerica" ($89.95 in paperback from Cognella Academic Publishing), by Michael Shaw Findlay, is a textbook; but its clear prose, pictures of artifacts drawn by the author, and an extensive glossary, make the book highly accessible to a general audience. It's a mostly chronological guide to cultures too often shrouded in myth.

By AD 250 in Mesoamerica "the centers of power were controlled by small cadres of elite nobility who managed state affairs and regulated trade to some extent." It was the time of what is called the "Classic period" (which lasted to around 900), and which produced "monumental architecture," writing, dynasties, and "institutionalized warfare."

What were these cultures like? Findlay brings in his own research as well as that of others from a variety of disciplines to provide a nuanced account. Religious life evidenced an interest in "spiritual sojourns": "In central Mexico and the Maya area," Findlay writes, art forms show "fantastic otherworldly scenes possibly aided by the use of psychotropic drugs (such as peyote, hallucinogenic mushrooms....)" and even "intoxicating enemas."

A cultural "collapse" came at the end of the Classic period, and Findlay unpacks the many reasons, including "cultural fatigue," before he charts the coming of the Spanish.

In the sixteenth century Aztec king Moctezuma practiced human sacrifices of those captured in war "to maintain the cycles of the sun." Findlay observes that "If we are going to judge the ancient Aztecs ... for their 'inhumane' behavior, we must be willing to also look closer to home to find analogous practices" in which nation-states demand sacrifices of their own citizens.

Just like the avocado (which originated in Mesoamerica), this is food for thought. 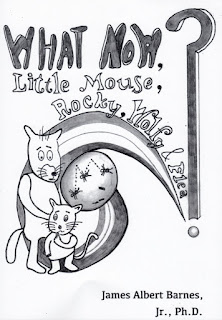 And young Little Mouse the Mouse does have a big problem. "A flying boulder/ With speed and glee/ Had landed on top/ Of a teeny golf tee.// As bad as that was/ As you can see/ It cuddled up to Little Mouse's home/ Within a width of a flea."

The whimsical story is told with Jim's pen and pencil drawings in "What Now, Little Mouse, Rocky, Wolfy And Flea?" ($7.99 in paperback, self-published; the Amazon link is available through littlemousethemouse.com/index.html.) The same book, without any shading in the illustrations, is available in "The 'What Now?' Coloring Book" ($7.99 in paperback).

We've already met Flea. Enter neighbor Wolf, who thinks it's child's play to blow the boulder away. But then Rocky awakens: "'Huff and puff all you want./ I'm not going anywhere!'" Rocky is not exactly accommodating. "'It's so relaxing and airy,/ This tee hits the spot.'"

But young Little Mouse suspects there's more going on, something bugging Rocky, "problems that we can't see." Indeed so; Rocky admits that "'Before I landed on this tee/ ... I was mostly underground/ And feeling quite blue.'"

When the backhoe came and dug Rocky out of the ground, he tells Little Mouse, Wolf, and Flea, he realized "'We rocks get no respect. We only catch a lot of heck.'// 'We're dug up, pushed around, and shoved aside....'"

But, says Little Mouse, rocks are actually very important. "'Take for instance Butte Creek,/ Over the cliff and to your right./ Your boulder kin have played/ Their part in a special delight.'// 'For if it weren't for rocks and boulders,/ There'd be no sounds and sites--/ Ripples, rainbow-waterfalls, bridges,/ And the deep holes that fish like."

Does that, uh, turn the tide?

Well, the moral of the story may well be: When in doubt, communicate. Be a little boulder. 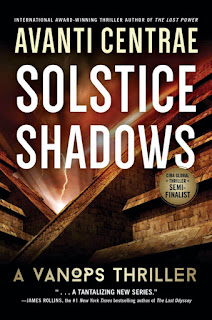 Grass Valley novelist Avanti Centrae is back with another world-spanning adventure featuring thirty-something twins Maddy Marshall and her brother Will Argones. It's a follow-up to Centrae's debut, "VanOps: The Lost Power," which should be read first (though readers of the new work are brought up to speed).

"Solstice Shadows: A VanOps Thriller" ($16.49 in paperback from Thunder Creek Press; also for Amazon Kindle) chronicles the work of Vanguard Operations, a shadowy unit of the CIA. Chartered "to keep an eye out for any sort of advanced ... technology that threatened the security of the United States," the organization learns that the Russians are developing a quantum computer capable of hacking even the most sophisticated protections.

In order to run properly, the computer needs superconducting materials, precisely what Maddy wielded in the form of small obelisks, strange shards that helped her channel ball lightning and defeat the Russians--for a time--some sixteen months earlier. But now the race is on to find the origin of those shards, likely contained in a meteor buried somewhere 3300 years ago.

The only clue as to its whereabouts is a "star chart" ripped from an ancient codex.

Centrae's depiction of what could happen if that super-computer hacked its way into U.S. "critical infrastructure" sent shivers down my spine: "How would truck drivers deliver food to stores with no gasoline? If dams didn't work, how would the farmers and firefighters have water to use? ... With no food, water, power, cash, or gasoline, there would be chaos. Armed fighting for basic survival. It would make the COVID-19 pandemic look like child's play."

And if the military's own communications were scrambled, the country would be open to, well, invasion.

Making matters worse, the Spaniards (under the direction of the evil King Carlos, to whom Maddy and Will are related) want in on the action.

The VanOps team (Maddy's boyfriend Bear Thorenson, who tries to get Maddy to join VanOps officially; Will; and group leader "Jags," an "intriguing" woman to whom Will is attracted) has only days to find the secret of the superconducting meteor.

From Mexico to Jordan, the action never stops until the nail-biter of a conclusion. 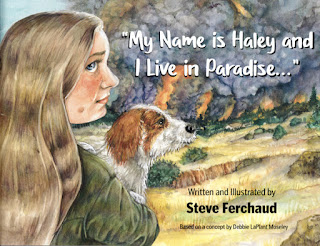 Burned out by the Camp Fire, Paradise illustrator Steve Ferchaud fills his latest creation with Paradise memories in a children's book for all ages--and for the ages.

The book came about when the Executive Director of Youth On The Ridge Community Foundation, Debbie LaPlant Moseley, had the idea of raising funds by auctioning off names and characters to be put into a book. The winning bid came from the Hartleys, owners of Joy Lyn's Candies, and so their granddaughter, Haley, is the one who tells the story, a kind of diary of Paradise before, during, and after the fire.

"'My Name Is Haley And I Live In Paradise...'" ($14.99 in paperback, published by Youth On The Ridge Community Foundation; printed by Digital Print & Design in Chico) is available at ABC Books in Chico and through the website of the Foundation's Paradise Chocolate Fest (chocolatefest.us/getting-involved/my-name-is-haley). Proceeds go to the Foundation.

As writer and illustrator, Ferchaud tells a hopeful story. But it's hope that knows full well what has been lost.

"I have to tell you about Noble Orchards," Haley writes. "I think I have a special talent for picking apples because I have always picked the best, juiciest, sweetest apples in the whole orchard. ... I wonder what the going rate is for an apple expert?"

Haley and her friends Lucia Violet and Sam spend time at Joy Lyn's ("I always choose the brittle"). There's Gold Nugget Days (readers may know some of the folks in the crowd), the Chocolate Fest, Gold Nugget Museum, Darlene's Ice Cream dreams, and Johnny Appleseed Days.

Then one morning the phone rings. Haley and her mom must evacuate, try to make it to Chico to meet her dad. Booming sounds are all around. For five pages Ferchaud's palette turns red.

"Then suddenly, there was blue sky."

Days pass, and the Skyway reopens. The two-page spread of a devastated Paradise, "empty and burned away," is heart-rending.

Months pass, and the family rebuilds. "There is still so much I want to say ... but do you know what I love saying the most...? 'Hi! My Name is Haley, and I live in Paradise.'"