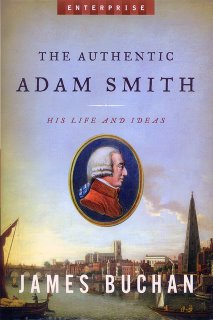 Source of our bounty: What Adam Smith the economist really thought

Adam Smith (1723-1790), author of "The Wealth of Nations," one of the most famous unread books ever published in English, has been co-opted by liberals and conservatives alike as either "the apostle of capitalism and the champion of laissez faire" or one who called on government to intervene in organizing the financial affairs of a country. Both pictures are inaccurate, at least according to novelist and critic James Buchan, formerly a foreign correspondent for the Financial Times and author of "Frozen Desire," a book about the nature of money.

Buchan has written an enlightening and wry little treatise called "The Authentic Adam Smith: His Life and Ideas" ($23.95 in hardcover from Atlas Books/W.W. Norton). In Smith's time "neither economics nor capitalism existed as mental entities. Smith was brought up in a backward corner of an unmechanised world, where the steam engine had not yet been brought to bear on the textile industry let alone transportation, where wages were so low it was cheaper to knit stockings by hand than by machine. ... Smith's estimate of British national income was ... less than the revenues of a large London or New York department store. ... Smith thought the most beneficial deployment of capital was in agriculture."

In 2005, visiting Kirkcaldy, Scotland, Smith's birthplace, then Federal Reserve Chairman Alan Greenspan called Smith "a towering contributor to the development of the modern world." Perhaps. What really happened, Buchan writes, is that Smith "fell among economists and politicians who constitute, more even than professional footballers, always the least-literate sections of English-speaking society."

This Thanksgiving, we are thankful for Buchan's small masterpiece in evoking an Adam Smith rarely seen. As Smith revised "Wealth of Nations," famous for its focus on the division of labor, he added a telling chapter to Book One. "He wrote," says Buchan, "that the 'disposition to admire, and almost to worship, the rich and the powerful,' while to an extent natural and conducive to the peace of society, was 'at the same time the great and most universal cause of the corruption of our moral sentiments.'"

While "Wealth of Nations" secured his fame, Smith's most important work, Buchan claims, is "The Theory of Moral Sentiments." "It is through sympathy," Buchan writes, "that we imagine the happiness of the rich and successful, follow the fashions they set, pursue ambition beyond our animal requirements and submit to distinctions of social class." Our sympathetic feelings judge what Smith called the "propriety" of others -- and of ourselves. "We sympathise more strongly with displays of social or benevolent emotions," Buchan says, "than with shows of resentment or hatred." There is no divine "moral sense" here, but only social arrangements, and that, says Buchan, "leaves society prey to manipulation."

Smith, friend of the irreligious but contented David Hume, rarely attended church and rarely quoted scripture. The "invisible hand" in "Wealth," describing how individual self-interest serves the public good, is not a reference to some divine "magic" but, says Buchan, points merely to "human faculties," what Smith calls "the private interests and passions of individuals." These, and the quest for respect from equals, are, in Buchan's summary, "what drive commercial society." Perhaps, Smith writes, God has ordered even our misfortunes on this "forlorn station of the universe," but that is not for us to speculate on. We must concern ourselves with our own happiness.

This is Smith's real legacy to the modern world. It is not an unmixed blessing.

Posted by Dan Barnett at 9:35 AM No comments: 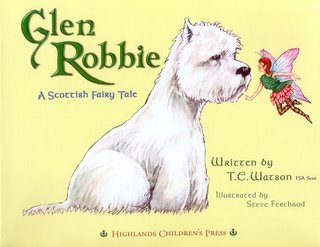 Children's books seem to be pouring from T.E. Watson's pen. The prolific Paradise author is just out with two Scottish stories.

The folk tale (told to him by his Gran) is called "The Man Who Spoke With Cats" ($18.95 in hardcover); the fairy tale is "Glen Robbie" ($22.95 in hardcover). Both are published by Highlands Children's Press and both are full of colorful and captivating pictures from master artist Steve Ferchaud.

Watson is proud of his heritage. The biography on his Web site (www.tewatsononline.com) says that "his DNA hails from the beautiful city of Elgin, Scotland, about 40 miles east of Inverness, Scotland. Which is surrounded with a multitude of historic Scottish landmarks ... the famous Loch Ness, the battlefield of Culloden Moor ... the Fairy Glen."

For research on Robert Louis Stevenson, a fellow Scot, the Web site notes that Watson received the title "FSA Scot" from the Society of Scottish Antiquaries.

"The Man Who Spoke With Cats" is a simple story of an old man named MacGregor whose companions, four talkative cats, are Little Face, Cleo, Tavish and Blue Eyes. Tavish asks MacGregor what he'll be doing on festival day. The man replies, with a twinkle in his eye, "I am going to visit friends. I will have my fill of bangers and mash, and then take a ride on the roundabout atop the tall white horse with the golden bridle." (A glossary points out that bangers and mash are sausage and mashed potatoes, and a roundabout, if you haven't guessed, is a merry-go-round.)

So what will the cats do? Little Face has a big day ahead: "My day," she tells MacGregor, "will be spent in the barley chasing midgies (large mosquitoes) and hunting mice." The rest had a big day of rest lined up, but, after MacGregor had gone for the festivities, the cats noticed that Blue Eyes, the Siamese, had disappeared. Therein, of course, lies a tale -- or tail, about caring for others who may have been forgotten.

"Glen Robbie" mixes in common Scottish words with a fairy story (again, a glossary in the back explains all). "On the anniversary of ten thousand moons," the story begins, "deep in the Highlands of Scotland, a wondrous wee village called Glen Robbie appears, but no one knows exactly where or exactly when. It is a magical place. There are the tallest trees, the greenest fields, and lochs so clear you can see tae the bottom."

On a certain day the fairy village appears and the Elder gathers all the denizens for their mission, to help someone from the outside. "Come down, come down, come down from the trees! / Come down from the branches and out from the leaves! / Today is the day tae fly with all speed / Tae find someone helpless, someone in need." There is some urgency in all this. The fairy folk have to find a human in need and help that person or, "if we dinnae find someone, Glen Robbie will vanish never tae be seen again."

What follows is the story of Kera and Podwink, Angus the West Highland White Terrier, and two human children. And, oh, yes, a hungry fox. Angus and the fox don't exactly see eye-to-eye and in the end the children have quite a story to tell their Gran. And Glen Robbie "peacefully faded away intae the evening mist and disappeared from sight." But, thanks to Kera, it will be back. 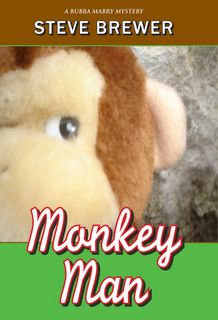 Steve Brewer may live with his family in Redding, and give readings from his novels in the Bay Area, but he left his heart in Albuquerque. Not to worry, though; private investigator Bubba Mabry is on the job in that fair city and reports back in a series of novels that are easily digested and self-deprecatingly funny.

Publishers Weekly says "Monkey Man" ($24 in hardcover from Intrigue Press) is something like the seventh Bubba Mabry mystery. This was my first, so I'm sure I've missed the nuances (like a reference to the power of patronage in Albuquerque), but it's great fun nonetheless. Mabry has a Southern heritage but runs Bubba Mabry Investigations out of his home near the University of New Mexico. His office is, shall we say, a little unkempt, so he meets clients, like slip-and-fall attorney Marvin Pidgeon, somewhere else. Mabry favors restaurants with pastries.

It's not exactly the good life now that he had married Albuquerque Gazette reporter Felicia Quattlebaum, but better than his past existence. "For years," he tells readers, "I lived in one of the cheap neon-lit motels that dot East Central -- Old Route 66 -- before Felicia came along and made me act respectable." Felicia is a firebrand, always on the lookout for a good story, always prepared to "comfort the afflicted and afflict the comfortable." And when Mabry becomes the center of attention after a very public murder in broad daylight, his wife chews him up one side and down the other for not giving her the scoop. She's one salty reporter.

Jeff Simmons, a bean counter at the Zoo In Albuquerque (ZIA), had arranged a meeting with Mabry at one of the Flying Squirrel eateries in town to tell the PI of some alleged monkey business. Animals at the zoo seemed to be dying off at a suspiciously high rate, but before Mabry could get the details someone in a monkey suit sauntered into the restaurant, walked over to Mabry's table, and shot Jeff Simmons dead. The monkey man gets away, leaving only the ape suit behind.

Mabry wants to wash his hands of the whole mess. Maybe let his friend, police Lt. Steve Romero, handle matters. Romero is a cop's cop, smart and tough, and why wouldn't he be named "Steve"? But Romero is constantly annoyed at Mabry, who just won't go home and let the cops do their work. Especially not after Mabry is retained by Simmons' fiance, Loretta Gonzales, Simmons' co-worker at the zoo, whose father is the founder of ArGon Foods (read "money"). She gives him a check for a couple of grand to get the investigation going. Mabry is hooked.

The reader will be, too. Brewer introduces a group of oddball zookeepers, like a curator of mammals named "Gibbons" and a zoo representative named Jim Johansen, "a handsome, tanned guy who decked himself out in safari garb. He regularly appeared on local television shows, talking up exhibits, bringing live parrots and snakes and baby crocodiles from the zoo, sometimes scaring the toupees right off the news anchors." Before he knows it, Mabry is knee-deep in monkey, uh, stuff, and he hates monkeys. There are twists and turns along the way, not least in the animal cages, and lots and lots of doorbell ringing, complication and confusion but in the end Bubba figures some things out in spite of himself.

And we readers wouldn't have it any other way.