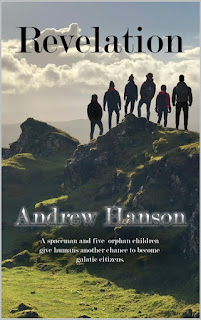 Consider: Somewhere out there in space, humans have come to a planet they call "Home World," fleeing the military-industrial complex on their "previous planetary home," a place in which war seemed to be the answer to every question. The colonists "resolved to bring with them only the technology that rewarded the peaceful solution of differences of opinion."

Over the next five hundred years only one war flares up. "When it was over, everyone ... agreed that killing each other was stupid." That was long ago; now, though, some of the countries on Home World are again amassing technological power with an eye toward the wealth of a planet known as E47. The "healthy technological and moral environment for human evolution" is about to be shattered.

For Chicoan Andrew Hanson, retired Professor of Education at Chico State University, and now a first-time novelist, the solution comes in the form of what might be called a "conspiracy for peace," led by Mark Sturgis, a rich and mysterious figure recently returned from E47.

He convinces Adrian Prescott Museum Director Eric Harris, and Assistant Director Rachel Johnson (who fall for each other), that he is indeed the late Adrian Prescott in a transplanted body. Can they convince Adrian's grandson, Jerold Prescott, Chairman of Prescott Industries, before Jerold makes a decision "that will jeopardize the future of our planet"?

"Revelation" ($14 in paperback, self-published; also for Amazon Kindle) focuses in the first part on Mark's (cinematic) E47 experiences involving friendly Hill People, the unfriendly "People of God" tribe, five orphans (the "Sherpas"), telepathic wolves, the Witness Tree (which is a kind of space and time transport), and a People Mover machine which allows Sturgis to escape.

The second part details a series of meetings among the conspirators reporting on peace movements they are encouraging. Will humans get another chance to be welcomed into a peaceful galactic community?

As Mark reports, "It's becoming increasingly clear that advocates for peace must do more than sponsor initiatives and rallies. Warmongering politicians with financial interests in arms industries must be exposed, and colluding arms manufacturers put out of business."

Questions of war and peace continue to resonate as the United States celebrates its own founding. 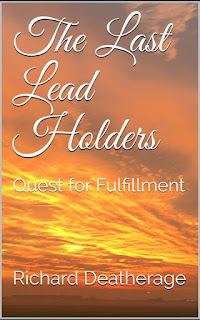 Construction Superintendent and architect Richard Deatherage of Citrus Heights retired his lead pencil in 2009. Drawing by hand he became "the youngest Project Coordinator/Architectural Draftsman in the State of California's history by the age of 20."

He offered to pick up his pencil once again after he learned his friends Andy and Barb Pilgram of Paradise, and their twin daughters' families in Magalia, had lost their homes in the Camp Fire. He ended up designing a home for one of the twins, Jessica Anderson and her husband Elijah, and it's now being built in Magalia.

Deatherage tells his own story, through 2009, in a rollicking memoir, an homage to his parents, especially his late father who "showed us how to live our lives to the fullest and to dream, as we each grew into manhood." "I had no sisters," he adds, "only brothers, and we just beat each other up for entertainment."

"The Last Lead Holders: Quest For Fulfillment" ($19.76 in paperback, self-published; also for Amazon Kindle) details his "adventures growing up in the 1960s and 1970s throughout America as an official United States Air Force Brat (USAFB)." Before he developed much of a conscience, he writes, he was not exactly an angel. (He set up a bootlegging operation to make extra cash when he was underage.)

The book is replete with "now it can be told" hijinks, but they are laid out against a somber experience of "racism in Mississippi in the late 1960s as a young white child; ... being involved in the bussing of all-white children to an all-black school in second grade; ... my parents' unknown struggles at home while my father was being transferred overseas and while he was in the war in Vietnam."

The turning point comes in 1979 when Richard's San Juan High School mechanical drafting teacher puts him on detention and challenges him to design a custom home. At 16 his plans are accepted by the building department. And so a career is born.

Lessons learned? We all need erasers, the "Last Lead Holder" puts it, and we all need to recognize "until the end of racism" that "we were always one."

"Spooky And The Gargoyle" 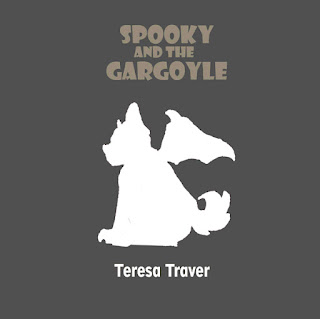 Chico State University English Professor Teresa Traver says the idea started with her preschool son who hugged the family gargoyle statue on his way to school. Traver specializes in British literature and literature of the child, and together with illustrator Ariana Dahlenberg she has published a little tale of courage and friendship.

"Spooky And The Gargoyle" ($7.99 in paperback from Thousand Acre Wood Books; also for Amazon Kindle) is an endearing story for ages 4-8 (with discussion questions and activities at teresatraver.com/spooky). It begins with a kitten adjusting to her family's new home which just happens to have a gargoyle statue outside. "The old Maxwell place was full of shadows that spooked her, so her family called her 'Spooky.'"

The full-page illustrations, in greens, browns, and purples, paint a world of mystery, one that needs exploring. Warily Spooky reaches out and touches the gargoyle who promptly admonishes her. "'Go away!' the gargoyle grumbled. 'I'm busy. My job is to guard the house. And I guard it best when I'm alone.'"

But Spooky keeps coming back to talk with Eben (for that is his name), though Eben isn't much of a conversationalist. Then there's the front gate. "Each day, Spooky drew a little closer to the gate so that she could see, hear, and smell more of the big world that frightened and fascinated her. One day a stray dog wandered by. Spooky took one look and ran. The dog chased her..."

Then: "Eben spoke. 'This is private property! No dogs allowed!"' Dog abruptly exits.

Spooky feels safe now. "Eben grumbled less. Sometimes he gave her pointers on how to guard a house. 'The trick is to LOOK confident, even if you're scared. Try it.'"

Another day and--there's another dog, a big one, who heads straight for Eben, jumping up and rocking him back and forth so hard Eben might fall from his pedestal. He shouts for help. "Spooky's heart hammered with fear, but she had to do something!"

Could a little white kitten who resembles a ghost actually frighten a big dog?

Traver's book received a 2020 Indie Reader's Discovery Award in the Children's (Board Books and Pre-Reading) category.

"How To Be An Antiracist" 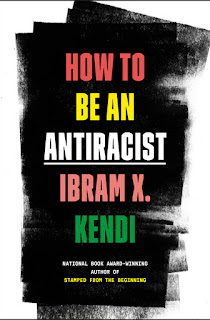 The 2020-2021 "Book In Common" for Butte College, Chico State University (csuchico.edu/bic), and other local organizations is an autobiographical exploration of the deep roots of racism in America, ideas which infect even people of color themselves. Ibram X. Kendi, founding director of the Antiracist Research and Policy Center at American University in Washington, DC, explores his deepening understanding of the pervasiveness of racist policies and invites readers to make the same journey.

"How To Be An Antiracist" ($27 in hardcover from One World; also for Amazon Kindle) begins with definitions, as Kendi realizes how racist policies affect every aspect of a person's existence--from biology (think "eugenics movement") to behavior (where well-meaning abolitionists "argue that oppression has degraded the behaviors of oppressed people").

Two types of racism intertwine in American history, segregation and assimilation. The segregationist declares he is "not racist" in promoting "separate but equal" institutions; more subtly, the assimilationist, also claiming not to be racist, promotes "equality" within a White standard.

Calling oneself "not racist" is, Kendi writes, "a claim that signifies neutrality: 'I am not a racist, but neither am I aggressively against racism.' But there is no neutrality in the racism struggle. The opposite of 'racist' isn’t 'not racist.' It is 'antiracist.' What’s the difference? One endorses either the idea of a racial hierarchy as a racist, or racial equality as an antiracist. One either believes problems are rooted in groups of people, as a racist, or locates the roots of problems in power and policies, as an antiracist."

Racist policies, Kendi says, flow from self-interest. "Racism" he defines as "a marriage of racist policies and racist ideas that produces and normalizes racial inequities. ... Race and racism are power constructs of the modern world. ... Racism is not even six hundred years old. It's a cancer that we've caught early."

Drawing a metaphor from his experience with colon cancer, Kendi's antiracist response focuses on policy: "Remove any remaining racist policies, the way surgeons remove the tumors. Ensure there are clear margins, meaning no cancer cells of inequity left in the body politic, only the healthy cells of equity. Encourage the consumption of healthy foods for thought...." 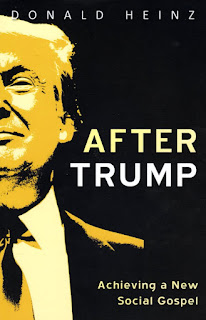 Donald Heinz, Lutheran minister and Chico State University emeritus Professor of Religious Studies, offers in his new book "an invitation and a manifesto." He calls for a revitalized Progressive Christianity "that mimics the liberating God of the Bible."

He wants the voice of the church to be heard once again in the public square (rather than a watered-down political liberalism too embarrassed to talk about Jesus). He wants to draw on "Catholic, Calvinist, Lutheran, evangelical, and neo-Anabaptist" teachings to restore the prophetic mission of the church in proclaiming God's "preferential option for the poor."

In "After Trump: Achieving A New Social Gospel" ($28 in paperback from Cascade Books; also for Amazon Kindle), Heinz says "what society most needs from the church" is "the prophetic imagination of alternative realities"--a vision of justice and the common good--brought into the public square.

We must, he says, take sin (personal and corporate) seriously, but reject what he calls "freeze-dried biblical literalism." "In the kingdom of God that Jesus proclaims, love stretches law and custom towards new forms of social justice. Arms full of antipathy to gays cannot carry the Gospel too." The church is a "parade" as it marches into the public square with this new prophetic vision; and it is "pilgrimage."

"Pilgrimaging towards a new social gospel is the task the times require if we are not to continue our descent into Trumpism--white racism, resentment, selfishness, a rapacious free market, and government in the interest of the 1 percent." The church is (or should be) on the move, collaborating with other institutions but never dissolving into them.

Heinz situates this liberation within a historical and cultural context. He writes that "the crisis of secular modernity (begun with the Enlightenment) is that it created a thought world in which the Bible simply was no longer allowed to speak." But it must: The "canon within the canon"--"God as liberator, played out in the exodus, the prophets, Jesus, and Paul"--provides the key to what the Bible can say in the public square.

The two Donalds (Heinz and Trump) present starkly different worldviews. The book calls readers to "think on these things."