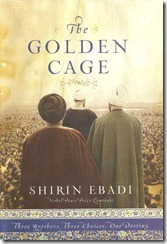 "Shirin Ebadi," a note about the author says, "was awarded the 2003 Nobel Peace Prize for her efforts to promote human rights ... in Iran. She is the first Muslim woman to receive the Nobel Peace Prize" and was also Iran's first female judge. She told her story half a decade ago in "Iran Awakening: One Woman's Journey To Reclaim Her Life And Country."

In that book she wrote: "The Islamic Republic may hold firm to its right to nuclear power, even if it means suffering sanctions at the hands of the international community. ... If the clerics in power detect military strikes on the horizon instead of a negotiated solution, they will find no incentive, no credibility gained, in safeguarding the rights of their citizens. ... The price of transforming Iran peacefully, I have long known but these days feel more acutely, is sacrifice of the highest order." Since 2009 she has lived in exile.

Sacrifice is the focus of her newest book, "The Golden Cage: Three Brothers, Three Choices, One Destiny" ($26.95 in hardcover from Kales Press), translated by Nathaniel Rich. It's the story of Simin and Hossein, their daughter Parì, and her brothers. The account traces that family's intensely personal story as the brothers, Abbas, Javad, and Alì, each respond to the Islamic Revolution in ways that divide the family and estrange the brothers from each other. Alì follows Ayatollah Khomeini, Javad has communist sympathies, Abbas swears by the Shah. It's a heartbreaking story, emblematic of the complex loyalties of the Iranian people.

Ebadi will be speaking at Chico State University's Laxson Auditorium on Monday, November 5 at 7:30 p.m. as part of the President's Lecture Series. Tickets are available through chicoperformances.com or from the University Box Office, (530) 898-6333. Adult tickets are $27 (premium $32), seniors $25, students and children $15.

Parì despairs for her brothers. "It's as if each one of them has locked himself in a golden cage--beautiful, strong, and as safe and secure as any ideology. But it's still a cage, and they can't see out of it or communicate with each other."

The book's epigraph, from an Iranian sociologist, says: "If you can't eliminate injustice, at least tell everyone about it." And so Ebadi continues to speak.

Romantic thriller from an Oroville novelist 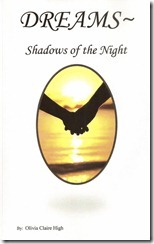 Geologist Josh Dallas is in the hospital after driving his truck into a lamppost to miss hitting a child. He awakes to see his nurse, twenty-seven-year-old Catherine Ashley, "skin the color of fine porcelain, hair like pale sunlight, and unbelievable sapphire eyes." She "possessed a sensuality simmering beneath her playful façade." Within five minutes Josh is asking her out to dinner.

Soon they're an item. "He liked fiery women and was quite happy to let her ignite his pilot light." And light it she does. But soon Josh is preparing to leave for the Amazon on a three-month research project and Catherine is troubled. "I saw you in my dream. You were lying unconscious surrounded by dense foliage. It was raining. You were covered in mud. It was a warning sign. I feel it." And something more: "I sometimes see things in my dreams--things that come true. I saw you in a dream the night before you came to the hospital."

Josh, of course, is determined to go. What follows is a page-turning, sometimes brutal account of the expedition and its aftermath. The two lovers face many challenges. There's a long separation, horrible deaths, family cruelty, a sinister plot--and those prophetic dreams. Oroville novelist Olivia Claire High keeps the suspense running high in "Dreams: Shadows Of The Night" ($13.95 in paperback from Fireside Publications, www.firesidepubs.com; also in Amazon Kindle e-book format).

The author will sign copies of her book at Artists of River Town Gallery and Gifts, 1435 Myers Street in Oroville, on Friday, October 26 from 4:00 - 6:00 PM. The public is invited to this free event.

The lovers are passionate, driven. Reunited, "the time for waiting was over. It was all about wanting and need. But when she saw the scars on his chest, the horror of what he must have had to suffer made her hesitate." But there's no hesitation in Josh. "Touch me, Catherine. I want your hands on me." Then: "Wild kisses that branded ownership and promised to fulfill every need had them both gasping, as the hot rush of emotion shot through them like acid etching into glass."

But there is another, deadly, acid, eating at their relationship, and "Dreams" sustains the thrill ride until the very end.

A childhood memoir from a local writer 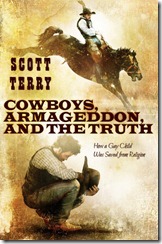 Scott Terry’s father, Virgil, “was born out in the boondocks of a dairy farm in rural Missouri, but raised on a cattle ranch in the mountains west of Orland in the California soon-to-be ghost town of Newville. In those days, the residents of Newville, half of which were my family, could be counted on two hands.” Virgil’s first date with Terry’s mother was in Chico “at the Peking Chinese restaurant on Main Street. ... They later conceived their first child, my older sister Sissy, in the front seat of his truck. In 1961, circumstances such as that required a hasty wedding.”

The marriage unraveled after Scott was born. His stepmother, “Fluffy,” fulfilled the stereotype ("You can't clink your spoon against your cereal bowl."). “Virgil,” Terry notes, “was introduced to Fluffy in the Jehovah’s Witness Kingdom Hall.” By seven, "I was in love with going door to door as a Jehovah's Witness. Immensely. It was a fantastic escape from Fluffy's house."

His memoir is called "Cowboys, Armageddon, And The Truth: How A Gay Child Was Saved From Religion" ($18 in paperback from Lethe Press; also in Amazon Kindle format). Terry will be signing copies of his book at Lyon Books in Chico this Tuesday, October 16 at 7:00 p.m.

The faith was called "The Truth"; "its primary philosophy ... was that of separation. The Truth expected social isolation from mainstream society." Besides, Armageddon was coming in the mid-1970s and one had to be ready.

Even as Terry embraced the faith, he was troubled by same-sex attractions and prayed earnestly for change. He read in a youth manual that "contrary to what many persons think, homosexuals are not born that way, but their homosexual behavior is learned." Confused, ashamed, he experienced a kind of double isolation.

The more explicit second half of the book details Terry's adolescence and college years, and his eventual coming-out to his Aunt Donnis "who worked for the test office at Chico State." He had abandoned The Truth years before and yet, at 23, verbalized to his aunt a different kind of truth.

Terry today is an artist, businessman, freelance writer, and "gay cowboy, a bullrider to be specific." His story of parental abuse, and sexual yearnings, may strike a chord with many readers.

A procrastination quilt from a Red Bluff writer 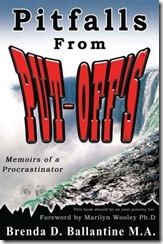 Brenda Ballantine, tired of dealing with her old sewing machine, bought a new one. Then she "spent hundreds of dollars for beautiful new material to make a king-sized quilt. ... I spent a lot of time and energy cutting up all the fabric, and I was ready to start. 'Oh, wait. Tomorrow I can start sewing; I need to do an errand first.' Days went by. Soon all the material was put out of the way. Spring came along, with work, school, and planting a garden." Then came a serious motorcycle accident and a long recovery time. And she forgot how she wanted to sew the pattern. Ever have one of those lives?

Ballantine, who has a degree in counseling psychology and who helps burn victims in the Redding area through the Fountain Gate Burn Foundation, found herself making notes on procrastination on "paper napkins, scratch papers, the back of an envelope--yet they all have to be gathered together and put into a format that everyone can enjoy."

This "procrastination quilt" is called "Pitfalls From Put-Offs: Memoirs Of A Procrastinator" ($10.99 in paperback from Xulon Press; also available in Amazon Kindle and Barnes and Noble Nook e-book formats). An interview with Brenda Ballantine, conducted by Nancy Wiegman of Nancy's Bookshelf on KCHO (Northstate Public Radio, 91.7 FM), can be found at http://goo.gl/3I7GU.

The author's little book is really not about "how to stop procrastinating," but is more like "notes to myself" about the many pitfalls she's encountered over the years. She realizes more is at stake than simply completing a project. It's about embracing life in a way that's impossible if one is always waiting to begin. "I believe that God is the only one who never changes," she writes, "and that is the only security I can depend on. The future has ... many twists, turns, and turmoil." The key is learning how to "grow old with grace."

She focuses on what happens when we put off tending to our health, our diet ("does 'celebrate' eventually end up really being spelled 'cellulite'?"), our loved ones. She deals with the problem of self-deception ("I must stop sabotaging myself!") and how procrastination affects others ("I can pack in the morning!"). And she finished the book.