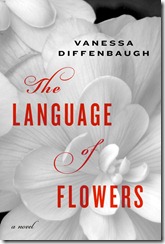 For Vanessa Fleming Diffenbaugh, who attended Chico public schools, graduated from Chico High School and studied education and creative writing at Stanford, it all began in a used bookstore. There she found a volume by Kate Greenaway detailing flower symbolism.

What bloomed is a novel of emotional depth and uncommon force. "The Language of Flowers" ($25 in hardcover from Ballantine Books; in e-book editions for Amazon Kindle and Barnes and Noble Nook; and in audio book format) tells the story of Victoria Jones. At age 18 she has had a stream of foster families but nowhere to call home. Meredith, her social worker, takes her to transitional housing. But soon she finds herself homeless on the streets of San Francisco. All she knows are the flowers.

In the third grade Victoria stayed with Elizabeth, a single woman who taught her about the language of flowers. "It's from the Victorian era, like your name," Elizabeth says. "If a man gives a lady a bouquet of flowers, she would race home and try to decode it like a secret message. Red roses mean love; yellow roses infidelity. So a man would have to choose his flowers carefully."

Now, years later, Victoria must answer the question: How can someone love who has never experienced love? A neighborhood florist discovers her skill with flowers; soon Victoria is creating extraordinary arrangements that seem to bring into being love and desire in those who purchase them. But for Victoria, life is lavender. Mistrust. She is hiding a secret that perhaps can only be expressed in flowers.

Diffenbaugh will be talking about her novel at 7:00 p.m. this Thursday, September 1, at the Chico Women's Club, 592 E. 3rd Street, in a free literary event. Lyon Books in Chico can provide more information.

It comes as a shock when Victoria realizes that the definitions Elizabeth had called "nonnegotiable" (an appendix provides Victoria's dictionary) were not actually settled. "Columbine symbolized both desertion and folly." She realizes "I had given Meredith peony, anger but also shame." Just what messages are the flowers sending? And that flower vendor, Grant. What part does he play in all this? "Perhaps the unattached, the unwanted, the unloved, could grow to give love as lushly as anyone else."

Los Molinos poet brings together "a chorus of voices" 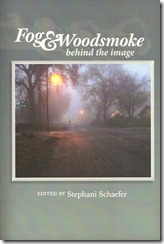 "I like to take pictures at dawn and dusk," Stephani Schaefer writes, "in rain and fog, where what you see and what you feel changes with the changing light." Such images "go looking for words." She eventually picked five. "The five chosen make a portrait of my neighborhood, from Josephine Street to the back road I wander daily with camera and notebook."

The first photograph chosen lends itself to the cover and the title. "Fog and Woodsmoke: Behind the Image" ($14.95 in paperback from Lost Hills Books, http://www.losthillsbks.com, or in Barnes and Noble Nook Book e-book) brings together the work of almost three dozen writers. They offer poetry and prose poems, some previously published, most freshly written for the project. You'll find familiar names here, including Rob Davidson, Sally Allen McNall, Lara Gularte, Patricia Wellingham-Jones, Schaefer herself, and more. (The book would be useful for creative writing workshops and writing prompts are available from the publisher.)

Each of the photographs, including a cross tied to a tree as a roadside memorial, trees full of blackbirds at dusk, a flooded road, and an "end of pavement" sign shrouded in mist, suggests some mystery, some deeper story ripe for imagining, and Schaefer's arrangement of the pieces is superb. The reader is enthralled. The poems are a kind of many-voiced commentary on the five images; they point out small details not seen at first and offer surprises on almost every page.

"Dreams are fragile as a spider's web," writes Nancy Paddock about the cover image, "blundered into by moonlight, / the pattern torn, threads drifting" ("In the Dark of Morning"). "Outside the fog grows dark as any sea," writes Bruce Henricksen. "It parts from time to time to show / the ancient starlight--worlds beyond / worlds, the layers of time / beyond need" ("Solitude").

Alan Catlin's "Still Life with Dead Zone" is a series of haibun ("two prose poems linked by a haiku"). The poet muses on the image of fog and woodsmoke: "Nothing moving but the smoke. The haze. The strange rings of the overhead street lights. // Dead air with black / smoke; impossible / to breathe. // Smoke from the burning thatched huts. ... A naked baby, sitting amid the wreckage, screaming." 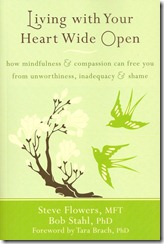 Steve Flowers conducts the Mindfulness-Based Stress Reduction clinic online and at Enloe Hospital in Chico. In his private practice he teaches meditation techniques to help his clients come to terms with the "narrative-based self": a self constructed by stories of one's own inadequacies and failings.

"The Mindful Path Through Shyness" addressed some of the issues; now, in a new book co-authored with Bob Stahl (who founded mindfulness stress-reduction programs at several Bay Area medical centers), he offers a more comprehensive Buddhist approach to "Living With Your Heart Wide Open" ($16.95 in paperback from New Harbinger Publications; also in Amazon Kindle, Barnes and Noble Nook, and Google e-Book formats).

Flowers will be speaking about the way of "radical acceptance" at a presentation and book signing this Tuesday at 7:00 p.m. at Lyon Books in Chico.

The book's subtitle is "How Mindfulness and Compassion Can Free You From Unworthiness, Inadequacy and Shame." The authors begin with "key concepts from both Western and Buddhist psychology" in examining suffering. "The modern psychologies of the West," they write, "have developed interventions to repair problems with the self, using techniques such as investigating how we think and learning skills to change dysfunctional thinking. Buddhist psychology also acknowledges that thoughts create suffering, but rather than working to change thoughts, this approach considers the act of witnessing thoughts without getting caught up in them to be an effective way to dispel their power."

Slowly, carefully, through stories of those helped by meditation, and by meditation exercises, the authors take the reader into a deeper understanding of what it means to make peace with oneself and with others. The ego is not necessarily bad; "a healthy ego" is needed "to get free of the delusions your ego spins." But the Buddhist perspective is that the ego is not permanent, is not really "us." We don't have a self to "fix." Acceptance of that idea is tantamount to "awakening" to loving-kindness, "self-compassion."

"Mindfulness meditation," the authors say, "is an investigative practice. You enter a space of awareness in which you can witness and examine the thoughts and emotions from which you fabricate a sense of self." There is no judgment; only freedom to practice "wisdom, virtue, and concentration," and, like the velveteen rabbit, to become "real." 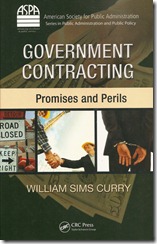 The rancorous debate over the Federal debt ceiling reminds us afresh that decisions made in Washington often have profound effects on Main Street. That includes billions of dollars paid to private companies by government entities contracting for needed goods and services. With so much money changing hands, the temptation to "nefarious, amateurish, and criminal behavior" is ever present. William Sims Curry, a Chico-based government contract consultant (www.wsc-consulting.com), addresses the issue head on.

"Government Contracting: Promises and Perils" ($69.95 in hardcover from CRC Press) provides "best practices" for those doing business with the government. Written "primarily from the government perspective," the book "includes recommendations for actions for contractors to avoid government sanctions, corporate fines, seizure of employee assets, and suspension or debarment of contractors." Though careful to praise the vast majority of contractors (and government officials), Curry focuses on negative examples where the process has gone off the rails, including Boeing scandals and the FEMA response to hurricane Katrina.

The book is technical in nature, dealing with contract processes; decisions about "sole source" or competitive bids; social objectives through contracting; proposal solicitation, evaluation, administration and auditing; and contracting during emergencies. A CD is included with the book presenting many of the forms and other document referred to in the text. But the lay reader may find the discussion fascinating, especially in contemplating the "government procurement corruption wall of shame," which includes bribery, abuse of power, contract fraud, ineptitude, partiality, poor planning, larceny, and more.

For Curry, the key to honesty in the contracting process is having a transparent process to begin with. It's not as easy as one might think. For example, if several contractors bid on a project, one company might have better management and past performance, but another might have better technical competence and be cheaper. Unless the criteria can be boiled down into a single number, it's likely losing contractors will file protests.

Curry notes that emergencies often lead to single source contracting, but that's often a mistake. "Obtaining competitive proposals or bids does not necessarily slow the contracting process because a solicitation can be sent concurrently to multiple prospective contractors." Though the company selected may not be the least expensive, competitive pressures may lower overall bids. Something to remember when the envelopes are opened.