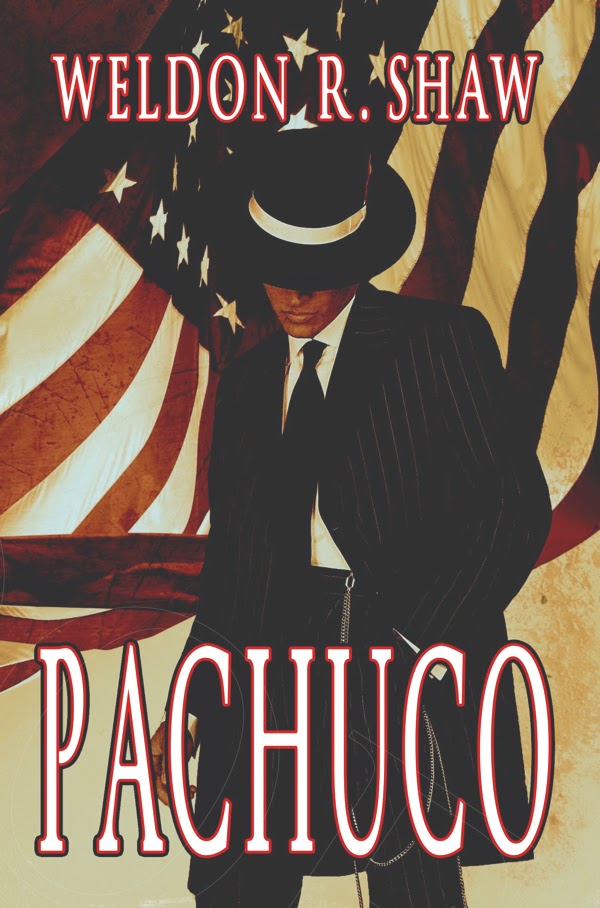 According to a news release, first-time novelist Weldon Shaw retired from the California Department of Corrections in 2012 where he was a gang investigator. Now living in Corning, Shaw draws on his knowledge of gang history in presenting the book-length narrative of a character named Emilio Cerna.

“Pachuco” ($16.95 in paperback from Black Rose Writing; also for Amazon Kindle) invites the reader to listen to the reminiscences of 80-year-old Emilio, “through four generations of his family’s history starting in Chihuahua, Mexico in the 1860s” up to the present. The first half of the book is about Emilo’s great grandfather and the sacrifices he made in bringing his family to Los Angeles. “The people of Chihuahua,” Emilio tells a newspaper reporter, “were poor, beat down by Mother Nature and father government.”

When the family finally settled in “East Los,” they found “their citizenship was not considered same as the Anglos’ citizenship. This alienation caused the gang mentality to spawn in East Los in the 1880s. The Hispanics were the first to have gangs.” At first the barrios came together to defend themselves against “Anglo injustice, but actually, in the end, they were banding together against the other neighborhoods.”

During World War II Hispanic young people began wearing flamboyant zoot suits, introduced by Mickey Garcia when he came to Texas from Pachuco, Mexico. The style found its way to East Los. “It was the era of ... anti-government sentiment, solidarity and yes, gang growth,” and led to the Zoot Suit riots in Los Angeles among Latino youth and Anglo sailors and marines.

Soon, says old Emilio, himself a second-generation Alpine Street gang member, “the gangs turned back on each other. Then the prison unity evolved, but as our history dictates we always end up eating our young and once again we turned back against each other.” Today’s gang members, Emilio tells the reporter, “do not know the history about why the Hispanics split up into North and South. They cannot even tell you why they hate each other so much.”

Emilio’s story offers a nuanced view of gang evolution; its implications are well worth pondering.

For the sake of the wolves 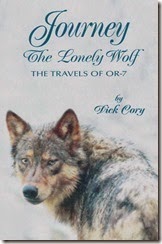 The indefatigable Dick Cory, former science and math teacher, Nebraska native, and passionate Chicoan, has created a love story for a wolf. This is wolf OR-7, so named by Oregon Fish and Wildlife biologists who used a GPS collar to track the animal over his 3000-mile trek from Oregon to California and back again. Given the name “Journey” in a contest, the wolf attracted worldwide attention, especially when it strayed into our neck of the woods.

Cory imagines diary entries made by the gray wolf in a whimsical book for kids of all ages, complete with colorful maps and wolf images. The book is called “Journey The Lonely Wolf: The Travels Of OR-7” ($15 in paperback, self-published; available at Made in Chico or from the author at ubangarang@yahoo.com, with a donation made to Teichert Ponds Foundation for each book sold).

“Finding food is not my problem,” Journey writes. “Finding a she wolf mate is. I have heard that I’m the first wolf to be seen in California in one hundred years. Still I have hopes.” The entries end in 2014, three years after Journey started his travels, with his mate Wanderlust raising three pups. All is well, at least for now. 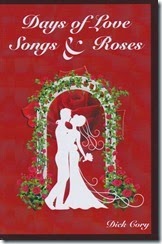 Sentiment is never far from Cory’s pen. A second recently published book, “Days Of Love Songs And Roses” ($30 in paperback), pairs lyrics to some of Cory’s favorite romantic songs with pictures of colorful roses, courtesy of the Butte Rose Society. “You Are My Sunshine” (1933) features the dark orange rose, symbolic of enthusiasm and desire. The Beatles even get in, with “And I Love Her” (1964), paired with the red rose of love. 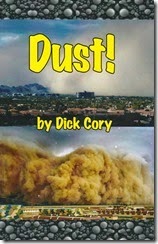 In a third book, “Dust!” ($20 in paperback), Cory assembles seventy-three short reflections on just about everything, from the Teichert Pond Project to puppy love, from manners and dress codes to “lessons I remember.” Writing on this side of 80 years, Cory notes that dust has always been with him, from cement dust when he worked concrete, to chalk dust when, as a teacher, he went for the abstract.

And found his voice.

The truth, more or less 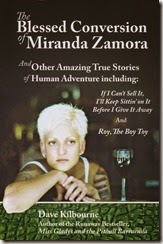 “In the past,” writes Dave Kilbourne, “I have worked as a US Forest Service fire tower operator, a rattlesnake wrangler, a swamp surveyor, a timber beast and as an alligator hunter,” not to mention for a dozen years serving as Executive Director of the Downtown Chico Business Association. He’s also something of an ex-con, having been “invited to attend the Aiken City jailhouse for a full week at the tender age of seventeen years and six months.”

Kilbourne’s South Carolina experiences are only the beginning. He takes the truth, allows it to ferment in his fertile imagination, and crafts tales that will set some folks to hootin’ and hollerin’ (politically correct this ain’t).

Speaking of craft, he took himself “down to the Sierra Nevada Pub” to find his muse. “During this period as I developed an approach to my own personal style of creative writing, my address simply became Dave, Sierra Nevada Taproom, back by the pizza oven.”

The result has been bottled as “The Blessed Conversion Of Miranda Zamora: And Other Amazing True Stories Of Human Adventure” ($14.95 in paperback from Flying Pig Press, flyingpigpress.net), available from the author at campkilbrn@aol.com or from Made In Chico (check for upcoming book signings).

By the author’s own count, the book contains “twenty-one acts of literary mischief.” Kilbourne takes the reader to “The Get Back Satan True Blood of the Lamb Abyssinian Baptist Church pulled-pork picnic, fireworks display and old time revival meeting,” and, in another piece, introduces “a fine all-American red-blooded working girl by the name of Ms. Violet Villanova” (whose “elder sister Debidoux had played the lead role in Debbie Does Dallas, which I believed was an art film of a special kind ... because I had seen it no less than four-dozen times during that theatrical period in my life when I showed this film for commercial purposes without a proper license”).

Smuggle in the Chico Roller Girls, Purple Juice, Richard Parker’s cat Jeeves, Chico Billiards, a passel of bawdy jokes, and plenty of beer, and it’s clear Kilbourne not only found his muse, but drank it. 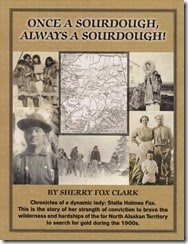 Sherry Fox Clark writes that she “resides in Paradise with her husband Kenneth Mann and their cat Lucky. After 48 years as a salon and spa owner/stylist, carnival food concessionaire, Harley Davidson Franchise owner, Photo Restorer, Merchant Marine and artist, she is now semi-retired and has fulfilled her Grandmother Stella’s dream to place in print her lifetime of adventures.”

“Stella” is Stella Homes Fox, who moved to Chico in 1975 and died the following year, almost reaching her ninety-seventh birthday. Toward the end of her life she wrote about her experiences in Alaska which form the basis of “Once A Sourdough, Always A Sourdough!” ($19.95 in paperback from Memoir Books; available at Made In Chico and from slclark01@sbcglobal.net). Replete with historical photographs and news clippings, the book is a record of an Alaskan pioneer woman.

“‘Sourdough,’” Clark writes in her introduction, is “a name given to fellow pioneers and miners of the early 19th century in the far North Alaskan Territory, a reference to the leavening used in bread making when yeast is not available.” Stella adopted it.

“I met my future husband, Edward A. Fox” in 1907, Stella writes. “He was an unassuming, quiet bachelor, a kind man, five years my senior, and a successful gold miner.” Married three years later, their destination was Candle Creek “on the northern side of the Seward Peninsula,” population about a hundred people (including eleven women) in 1911. Soon their son K Arthur was born (“K,” Stella points out, is not an abbreviation). Daughter Lola arrived, with special needs, a few years later.

Transportation in the winter was by sled. They met Roald Amundsen “who drove a dog team through Candle Creek on his way to the North Pole” (he wasn’t successful that time).

When mining prospects dimmed, the family decided to move to Seattle. The nearest harbor had frozen and the Coast Guard was called to rescue the party of 14. (The newspaper accounts make fascinating reading.)

Though Candle Creek became “nearly a ghost town,” the family’s deep interest in Alaska continues, and Sherry Fox Clark has produced a loving tribute to her grandmother’s life. 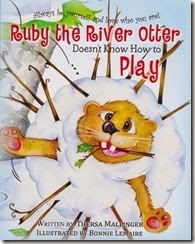 Pity that Shakespeare never met Ruby the river otter, the heroine of a series of children’s books by Chicoan Thersa Mallinger. The Bard specialized in plays on words; Ruby specializes in words on play. Ruby, it seems, doesn’t know how to play.

Mallinger writes on her website (rubytheriverotter.com) about an event at Bidwell Park near Bear Hole. “I was blessed to witness a group of river otters playing! So, so cute!!!!! What an adorable idea for a character in a children’s story, I remember thinking to myself. Just like that, Ruby the River Otter was born!”

Through her books Mallinger encourages “self-exploration and discovery through creativity.”

“Ruby The River Otter Doesn’t Know How To Play” ($14.95 in paperback, self-published, available at Made In Chico and the Chico State University bookstore) traces Ruby’s quest to imitate other animals. She floats in the river like the alligator but “soon, Ruby’s back began to get hot and a fly flew right into her mouth. ‘PTOOEY!’ Ruby sputtered, spitting out the fly! She decided it was absolutely arduous trying to be an alligator!”

Ruby tries to have fun like the beaver, but just gets bits of wood stuck in her teeth. So how about being a songbird? “Instead of whistling, a bunch of spit and branches came flying out. She gave the birds a bath ... and it wasn’t the type of bath that birds like at all! ... It was bonkers trying to be a boisterous bird!” (The boisterous illustrations are by Bonnie Lemaire)

The bears, unbearable. The burrowing owl, a loner. So Ruby rubbed on sap, stuck on sticks and pretended to be a porcupine. “There, now no one will want to play with me, and no one will ever need to know that I don’t know how to play.”

But the story’s not over. When the snows come, Ruby makes a discovery. Maybe she does know how to play, a “porcupine” rolling down the riverbank, just being herself. For isn’t that what river otters do best?

Mallinger will be a guest at the Chico State bookstore May 9 from 1- 2 p.m.; the public is invited.