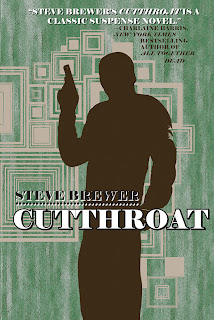 Steve Brewer of Redding made his mark with the Bubba Mabry mystery series and stand-alone titles such as "Whipsaw" and "Bank Job."

From the looks of it, he's starting a new series featuring 33-year-old Solomon Gage, all brains and brawn stuffed into a handsome package that everyone says looks like "Mr. Clean." You know, from the commercials.

Gage is introduced in "Cutthroat" ($14.95 in paperback from Bleak House Books) as a fix-it man for billionaire Dominick Sheffield and his family enterprises headquartered in San Francisco. Gage's mother worked for Sheffield as an executive assistant until she was killed in a car wreck. "I was 14," Gage tells Lucinda Cruz, the beauteous divorce attorney, "and Dom took me in, put me through school, trained me to be his assistant."

It was no ordinary training. As Brewer writes, "Solomon was educated in business, the humanities and the special skills (martial arts, firearms, evasive driving, risk analysis, etiquette) that made him the perfect right-hand man."

The word "cutthroat" has multiple meanings in the book. Cutthroat Lodge is the name of the Sheffield family sanctuary deep in Mendocino County. The nearby creek, of course, is full of cutthroat trout. And then there is Robert Mboku, a hired killer who wields a mean machete.

The plot has rat-a-tat action to match the gunfire in the book. Dom's two ne'er-do-well sons are mixed up in some nefarious back-room deals with none other than Gen. Erasmus Goma, Supreme Military Commander of the Republic of Niger. Michael Sheffield (who was "bald and wore a mustache") and his brother Chris are poster boys for all that's wrong in the world.

As Dom muses, "What is it about the children of the rich? & Why do they so easily succumb to vice? Look at Chris, with his gluttony and his greed. Michael, with his infidelity. & A man works hard all his life to provide for his family. The money turns around and destroys those he loves. & So different from Solomon. Sometimes, Dom felt Solomon could read his mind."

Early in the story Abby, the strung-out child of Dom's daughter, doesn't understand the biblical reference to Solomon. "What was he?" she asks. "A wise king." She snorts. "That's you? You're wise?" "I'm trying."

"Cutthroat" is a tad darker and the stakes higher than some of the other recent Brewer novels. The satisfying ending opens the door for more Solomon Gage adventures. Be on the lookout.

Posted by Dan Barnett at 8:27 AM No comments: 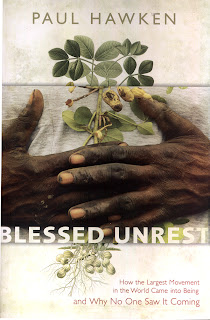 Paul Hawken, who lives on Cascade Creek in Marin County, has for years chronicled the growth of what he calls a new kind of social movement, one that combines environmentalism, concern for social justice and an affirmation of the rights of indigenous peoples.

His research bears fruit in "Blessed Unrest: How the Largest Movement in the World Came Into Being and Why No One Saw It Coming" ($24.95 in hardcover from Viking). Hawken says there is no name for this movement, but it likely encompasses more than a million nonprofit organizations around the world that are working, mostly on the local level, not to "save the world" but to "remake the world."

Hawken is scheduled to appear at 7:30 p.m. Tuesday at Chico State University's Laxson Auditorium as part of the On The Creek Lecture Series. Sponsored by Chico Performances, tickets are $15 for adults and seniors, $10 for students and children. Tickets are available at the University Box Office at 2nd & Normal Streets; call 898-6333.

The first half of "Blessed Unrest" offers a brief history of the movement's development, and he is optimistic. "The as yet undelivered promise of this movement is a network of organizations that offer solutions to disentangle what appear to be insoluble dilemmas: poverty, global climate change, terrorism, ecological degradation, polarization of income, loss of culture, and many more. ... If you examine its values, missions, goals, and principles ... you will see that at the core of all organizations are two principles, albeit unstated: first is the Golden Rule; second is the sacredness of all life, whether it be a creature, child, or culture."

The combined work of these organizations acts almost like an invisible hand, transcending the excesses and selfishness that creep into any group, helping the world heal itself: "Specifically, the shared activity of hundreds of thousands of nonprofit organizations can be seen as humanity's immune response to toxins like political corruption, economic disease, and ecological degradation."

The second half of the book is a taxonomy of the organizations in the movement, thousands of which are presented on the WiserEarth (www.wiserearth.org) site, which lists dozens of nonprofits in the Chico Area, including the Butte Environmental Council and the Chico Peace and Justice Center. Anyone can add to the database online.

For Hawken, the movement is one of cooperation and compassion, dedicated in all its forms to sustainability, "stabilizing the currently disruptive relationship between earth's two most complex systems - human culture and the living world." He adds, "I believe this movement will prevail." 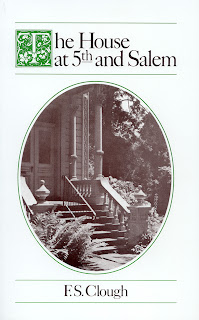 The Stansbury Home museum is one of Chico's favorite wedding venues, but those who don't know its history can visit "The House at 5th and Salem" ($7.50 in paper, commissioned by the Stansbury Home Preservation Association) through the eyes of Frederick S. Clough, the grandson of Dr. Oscar Stansbury.

Originally published in 1978, the reprint includes numerous black-and-white historical photographs of the house and its inhabitants, an overview map of Chico in 1871, and a Stansbury family tree.

Sorting through family possessions, Clough found hundreds of medical notes and letters (one from 1793) which he used to create "an informal account of my grandfather's life — his beginnings in Mississippi, his boyhood experiences during the Civil War, his college days, his journey west and highlights of his life in Chico from his arrival in 1875 until his death in 1926. But how to go about it? After some reflection, I decided to present the story in the form of a series of simulated interviews with Grandfather."

The portrait of O. Stansbury (he never liked "Oscar") that emerges is that of a person with a keen sense of humor and, according to his wife Libbie, not much business sense. Stansbury was the product of the Old South; Clough has his grandfather say the following: "If you are ever going to understand me as you put together these reminiscences, you will have to accept the fact that, as repugnant as it may seem to you, we Southerners avoided the moral judgment as to whether slavery was good or evil. It was simply a way of life." A publisher's note in the book asks readers to consider the story in the context of its times.

The house, of "Italianate design," was completed in 1883 at a cost of $7,273, with a thousand dollars more for the property.

The book not only details everyday life in Chico, but also Stansbury's experience in San Francisco in 1906 when, on April 18, just after five in the morning, "I was suddenly awakened by a terrifying rumble like the sound of 50 railroad engines bearing down on me. The bed began to tremble and lurched partly across the room. ... The next six days, while the city burned ... I spent in Golden Gate Park taking care of the injured with what medical supplies were issued to me, still wearing the few clothes I had managed to put on when disaster struck."

Stansbury's story is part of the warp and woof of Chico, woven into our past, illuminating our present.

Posted by Dan Barnett at 3:17 PM No comments: 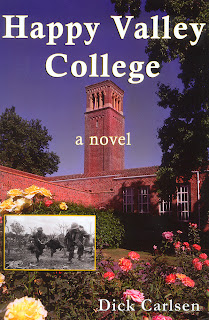 Dick Carlsen, who with his wife, Cathy, lives in Virginia Beach, Va., writes that he "graduated from Chico State College in 1968, received my master's from Indiana University in 1973, and have been working for the Navy as a government civilian employee for 34 years."
He recently published his first novel, which takes place at the college in the years 1964-1967, called "Happy Valley College" ($17.99 in paper from www.authorhouse.com).

The story is told by Dave Pederson, whose parents drive him to meet his twin brother Dan at "Happy Valley College" north of Yuba City. What follows is a chronicle of free-spirited guys in their natural element: keggers, rowdiness, romances, sports, spring break, keggers and, on occasion, classes. Actually, the group of guys who formed the "Raiders" (a kind of alternative to the fraternities on campus) ended up doing pretty well in school, but that's not the focus of the book. Transition is.

The prologue takes place years later, when Dave Pederson visits the portable Vietnam War Wall set up at a Naval base in Maryland, and maybe such an event was the catalyst for Carlsen to write his account.

The book reads more like memoir than novel, and I found myself reliving my own time at Chico State during those same years. Carlsen remembers the "CAC," the student center later replaced by the Bell Memorial Union. But for some reason he renames the nearby park "Sutter Park & named after General John Sutter, the founder of Happy Valley whose beautiful Victorian mansion sat off The Boulevard and adjacent to the college property, and was used for a 1930s movie 'Robin Hood'."

The language is sometimes rough, and swearwords abbreviated in the first half are spelled out in the last.

When the draft becomes a reality there is little talk of fleeing to Canada or becoming conscientious objectors. Everyone wanted to get into the reserves, and through a chance encounter Dave succeeds. Later, though, when his drill sergeant is lost in the war, Dave applies for active duty.

Maybe his reason suggests the "outrageously crazy days" at Happy Valley were bought with a price: "I want," he says, "to make up for my indifference toward the war and our soldiers when I was in college."

Posted by Dan Barnett at 9:23 PM No comments: