A history of Orland told in vintage photographs 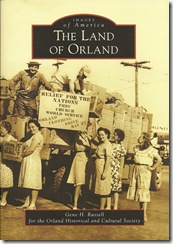 The picture on the book’s cover, taken in 1947, shows Orland volunteers collecting clothing for overseas relief. It’s one of 220 “classic Orland photographs” contained in “The Land of Orland” ($19.99 in paperback from Arcadia Publishing, www.arcadiapublishing.com) by Gene H. Russell for the Orland Historical and Cultural Society (which celebrated its 30th anniversary in 2007).

Part of the publisher’s “Images of America” series, the book tells Orland’s story through photographs from the Alta Schmidt House Museum and other local collections, carefully annotated by Russell, who also provides a historical introduction. The back cover tells readers that “the Land of Orland dates from the pre-Gold rush 1840s when Granville Perry Swift selected the area for the adobe headquarters of his vast cattle operation. The naming of the town took place in 1875 when three men—who could not agree on a name—put their choices on slips of paper and the name ‘Orland’ was drawn from the hat.”

In his introduction, Russell notes that “much of the Old West had vanished from view and was lost before the first cameras came to capture pictures of the Orland area. The earliest photographs in this book . . . date from the 1880s and 1890s.” Orland’s best years were yet to come. The key word was water. “In February 1906, the Orland Unit Water Users’ Association was formed, and by that July, a survey party was busy at work in the western foothills on Little Stony and Big Stony Creeks. Four months later, the East Park Dam site 60 miles southwest of Orland had been selected for the first federally funded irrigation project in the West. Boom times were just around the corner.”

Orland’s population “increased from 600 in 1910 to 2000 in 1912. The farm population increased almost 250 percent as land values (and land speculators) increased dramatically.”

The book is divided into 8 chapters (including Early Years, Orland Irrigation Project, Business Enterprises, Schools, Churches, Entertainment), each introduced with a line drawing of a prominent citizen, such as Prof. Jerome B. Patch, “founder and president of Orland College (1882-1891). . . . Patch’s famous standoff incident with Constable Gifford took place in the college in January 1884, and he was relieved of his teaching duties. When he died . . . he was remembered for his unreasonable stubbornness and erratic, impulsive, and obstinate behavior.” He was also a good organizer and a man of zeal, “Orland’s most enigmatic character.”

“The Land of Orland” is a delightful trip to earlier days, Russell’s tribute to a land he loves.

Posted by Dan Barnett at 8:06 PM No comments: 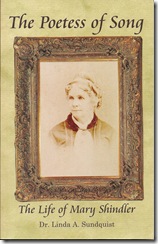 “O, those were the halcyon days, those days of youth!” the poet wrote. “That sun-bright, dewy morning of my life, / When all around wore the bright garb of truth; / Before I knew that earth with woe was rife.” Woe was to come in great measure to this 19th-century writer, whose life is now chronicled with great intensity by longtime Durham school teacher Linda Sundquist-Nassie of Paradise.

“The Poetess of Song: The Life of Mary Shindler 1810-1883” ($14.95 in paperback from WingSpan Press) weaves together the author’s research among family records with Shindler’s own poetry, much of which was designed to be sung as hymns.

Eventually the research took the author to Texas. “In reading her original poems, stories and articles,” she writes, “many of which have never been previously published, I discovered that here was a soul bolstered and preserved only by an incredible personal faith and strength of character . . . who had found purpose out of tragedy and resolve in the face of complete isolation.”

Mary’s minister father, who began the first Sunday School in South Carolina, was loving but doctrinally demanding. In 1832 she married Charles Dana from Vermont (a cousin, Richard, wrote “Two Years Before the Mast”). Tragedy struck in 1839 with the death of Mary’s brother and then, within two days, of her husband and son. Two years later Mary published “The Southern Harp,” 43 poems and songs “to cheer the heart.” It sold 20,000 copies.

But her “inner turmoil continued.” At the age of 36, “widowed, childless, and uncertain about what to do” her father’s faith had seemed to fail her, and she converted to Unitarianism. In 1848 she married Robert Doyne Shindler, trained in ancient languages, and became an Episcopalian. But he is restless and can’t hold a job. He dies, perhaps from self-inflicted wounds, in 1874.

Earlier, Mary had become intrigued by spiritualism and, facing immense loss with the death of so many loved ones, composed “Mrs. Shindler’s Spirit Band,” a list of those now departed who Mary believed were “watching over her, guiding and guarding her.”

She spent the last years of her life in Nacogdoches, Texas, where Robert had been rector of Christ Church. Her tombstone bears words from her own writing: “Cease from your sorrow and crying / Jesus will wipe every tear!” As Texas Senator Kay Bailey Hutchison writes in her foreword, “Mary lived through plagues, heartbreak and financial difficulties—but left a legacy depicting the indomitable spirit of the women in early America and early Texas.”

Posted by Dan Barnett at 8:05 PM No comments: 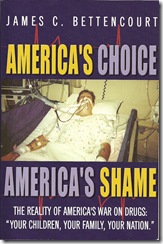 As Willows resident James C. Bettencourt tells it, he was oblivious to the rampant abuse of alcohol and methamphetamine among young teenagers. Then it happened.

“The horrific nightmare exploded as I entered the emergency room. This was the first saturation of illegal drug reality into my drug-dummy brain. I witnessed my then-15-year-old son having a grand mal seizure induced by an illegal drug, his underweight, frail body rigid, shaking violently and eyes rolled back in his head. It was only at this point I truly understood what was at stake; it was at this point I really understood my son could die. As the EMT’s desperately tried to control my son’s body, I told the ER doctor that we needed life flight to Chico, a larger, better-staffed hospital, right now.”

So began one parent’s drug education, the hard way. The story is told in “America’s Choice, America’s Shame: The Reality of America’s War On Drugs: ‘Your Children, Your Family, Your Nation’” ($19.95 in paperback from AuthorHouse). A picture of Bettencourt’s son, Joe, appears on the cover. Inside, in the rough-hewn prose of a concerned citizen, Bettencourt lays out not only his son’s use of meth and its insidious pull, but the larger social issues that seem to give young people tacit consent for abuse.

“In our family,” the author writes, “our house did have hard liquor in the cabinet and a beer in the refrigerator. This was just as good as promoting alcohol. I saw marijuana as something for adults. I thought it harmless, but my personal use had been reduced to very seldom. . . . I might as well have waved banners urging our kids to use illegal drugs and alcohol.” (The second half of the book presents, verbatim, a lengthy report on alcohol use and abuse from the US Department of Health and Human Services.)

With deep parental support Joe eventually recovered and made plans for entering Chico State University. Many other kids have not been as fortunate, and that led Bettencourt to set up the “Not In Our Town Glenn County” coalition which focuses on drug abuse prevention. But his efforts, he writes, were not universally welcomed. “Drug education takes a back seat to special interest groups. . . . If you take into consideration many agencies and businesses are profiting annually, sharing $650 billion to deal with the devastating aftermath of drugs and alcohol, it is understandable why the solution of effective substance abuse prevention is not promoted.”

Posted by Dan Barnett at 8:02 PM No comments:

How tweet it is: An anthology of ornithology from a Chico State University Professor 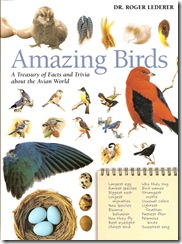 Roger Lederer, Emeritus Professor of Biological Sciences at Chico State University, and the school’s first Jack Rawlins Professor of Environmental Literacy, has just published a full-color compendium of bird lore that’s a must-have for kids and adults. “Amazing Birds: A Treasury of Facts and Trivia About the Avian World” ($18.99 in paperback from Barron’s) will kindle wonder in any budding bird-lover. (More information is available at Lederer’s incredible www.ornithology.com site.)

On just one two-page spread the reader learns the following: that the 3-pound raven is the largest perching bird; that “although birds do occasionally drift or get blown off course by the wind, studies of radio-tagged Canada Geese demonstrated that they are able to maintain a constant ground speed as well as a straight track over the ground by compensating for changes in the wind direction and speed”; that “in the last century, over 60 million birds were banded in North America”; that among birds with penises, the longest (over 16 inches) is on the Argentine Lake Duck (“nearly as long as its body”); and that the term “stool pigeon” “derives from the French estale or estal, referring to a pigeon used to lure a hawk into a net.”

Lederer explains in an introduction that he wrote his book because, though “everyone is familiar with birds, . . . not many of us really know birds. We recognize birds because they are the most uniform of all animal groups—all have feathers and lay eggs, many sing, and most fly. . . . But as homogeneous as they appear to be, they and their habits have diversified in amazing ways, from penguins that incubate their eggs on top of their feet to brush turkeys that do not sit on their eggs at all. . . .”

He adds that “this book answers puzzles like why some birds defecate on their legs, why they fluff their feathers, why baby birds fall out of their nests, and how to attract birds to your feeder and keep them from flying into your windows.”

On another page Lederer takes up the controversy about whether the Ivory-billed Woodpecker is still alive. “There have been several claimed sightings in Florida and other U.S. states over the past half century, even recently, but scientists do not agree as to whether the species still exists.” Accompanying the text is a beautiful full-page painting of several Ivory-bills—and it’s clear to this observer at least that whether they are still around is, uh, a matter of a pinion.