Two codgers on horseback from Paradise to Idaho's Snake River 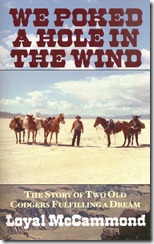 Back in June 1990 Loyal McCammond and his friend Bert Lefevre told their wives they'd be making a 700-mile horseback ride from Paradise to Glenns Ferry (where Bert's brother-in-law lived) near the Snake River in Idaho. Loyal was 50-years-old, Bert 70, and the two set out with three mules and two horses and not many smarts.

When it was over, Bert wanted to write the story of the 27-day trek but passed away before the project could be completed. Loyal took up the task, recounting their misadventures in Bert's voice and in so doing introducing readers to a plain-spoken man with an eye for beauty, given to understatement and deadpan humor. Bert comes alive in "We Poked A Hole In The Wind: The Story of Two Old Codgers Fulfilling A Dream" ($10.95 in paperback from JADA Press) by Loyal McCammond.

McCammond, who now lives in Orland with his wife, will be signing copies of his work at Lyon Books in Chico this Wednesday, June 29 at 7:00 p.m.

The trekkers "crossed the Skyway at the Lovelock Inn," says Bert, "and, oh man how I wanted to stop for a beer. I've always been a very reliable beer drinker, and I sure wanted a beer mighty bad." But it was not to be. There were deserts to cross and parts of four states to traverse. So no beer--until they, uh, pulled into the Inskip Inn.

But now onward! Along the way the travelers meet a succession of nice folks, people who provide a place to crash, food for the animals and the adults, and a bit of trail guidance. Bert and Loyal don't hew to roadways if they can help it, and sometimes there's not much of a trail. Here and there they find lonely windmills still pumping fresh water, abandoned barns in which to take shelter, and even places that serve beer.

Preparing to cross into Nevada, they spend the night in an empty cabin. The next day, says Bert, "when we were about five miles out from Wemple's cabin, I made a terrible discovery. I had either lost my teeth or left them in the cabin."

Intrepid, Bert soldiers on, leaning forward, living the dream, poking a hole in the wind. 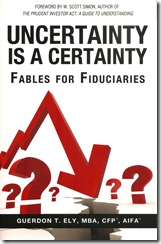 If you are responsible for handling someone else's money, you may be a fiduciary. Investment advisors are fiduciaries, but so are people managing the finances of an aging parent or acting as a trustee for a family trust. Fiduciaries are regulated by the Uniform Prudent Investor Act (UPIA), a code of conduct expressed in formal legal language.

That's where Guerdon Ely comes in. He's the author of "Uncertainty Is a Certainty: Fables for Fiduciaries" ($14.99 in paperback from Xulon Press). The Chico-based Certified Financial Planner (www.elyportfolios.com) presents the duties spelled out in UPIA using stories and analogies that anyone can understand.

His self-deprecating reminiscences are sometimes hilarious, but Ely has a serious purpose. Proper stewardship of another's money is not just about following a legal process; it's about developing honest character not tempted by Wall Street greed or swayed by "sucker bets."

Ely will be speaking at the Chico Branch of the Butte County Library on Wednesday, June 22 at 2:00 p.m. as part of a series entitled "Transforming Life After 50." He is scheduled to focus on global economics, the financial meltdown, and how individuals can respond. The two-hour presentation is free and open to the public.

It's vital for a fiduciary to determine the "time horizon" of investments; but the time horizon may well change with changing circumstances. Early in his marriage Ely was living from paycheck to paycheck. He told his wife: "'My most important short-term goal is this month's rent payment and my most important long-term goal is next month's.' ... Things were so tight that a big night out was splitting a turkey sandwich and a cup of soup at Denny's, and then going window-shopping at the grocery store." Later, Ely and his family were able to look a little farther ahead.

A fiduciary is judged not by portfolio performance but by whether he or she follows a process that rests on appropriate skill and good judgment. "Knowing isn't enough," Ely writes, "because we are hardwired to do dumb things when it comes to money. Therefore, as a fiduciary, you need the courage to do the right things and the discipline not to do the wrong things."

If this sounds like a philosophy of life, the reader has made a prudent observation.

Holocaust survivor Voyles offers remembrances of wartime in the Netherlands 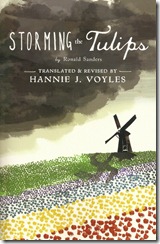 The 1st Montessori School in Amsterdam opened its doors as a public institution on October 27, 1927. Almost 75 years later, a former student wondered how many of the children from the school had died in World War II. That sent one of the teachers, Ronald Sanders, on a quest. "When the war started," he writes, "about 20 percent of our students were Jewish. After the war, fewer than ten students came back to the 1st Montessori School; the Nazis had murdered more than 90 percent of the Jewish population of the Netherlands."

Hannie J. Ostendorf Voyles, longtime Butte College writing instructor now in active retirement, attended the school starting in 1939 with her sister Joosje. "Before that," she remembers, "we had been students at the 6th Montessori School with Anne Frank. Anne was older than I was; she was in the upper grades, but I remember seeing her at school and in the neighborhood."

Anne and her family went into hiding. "Before long, many students in our new school met a similar fate. Like Anne, they simply vanished. We were little children and could only watch as our friends were first deported to JEWS ONLY schools, and then were rounded up and carted off for extermination. From my own school, 173 students were murdered."

Some of the stories of those who survived, and those who didn't, are told in "Storming the Tulips" ($17.99 in paperback from Stonebrook Publishing), written and compiled by Ronald Sanders and translated and revised by Hannie Voyles.

Voyles will be speaking about the days of Nazi occupation at 7:00 p.m. this coming Wednesday, June 15, at Lyon Books in Chico.

The various accounts in the book are anchored by a love of 1st Montessori. Here are the stories of teachers who hid Jews; those in the Dutch Resistance who gave their lives; Jewish children who barely escaped the incinerators. In 1942, as "friends and neighbors were torn from their homes and sent off to the camps," the Pinkhofs, including three children who attended 1st Montessori, "committed suicide as a family." Another student, who stopped by on the way to school, discovered the bodies. That student was Hannie Voyles.

"The children have no monument," she writes. Now, they do.

Paleo for the family: A guide from a local mom (and Crossfit Trainer) 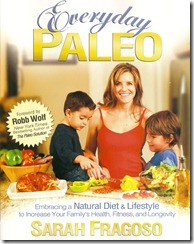 Sarah Fragoso is not only a trainer at Robb Wolf's NorCal Strength and Conditioning gym in Chico. She's an ardent exponent of what has come to be known as "the paleo solution" (the title of Wolf's recent best-seller). Fragoso says that "eating paleo is an easy concept: We should eat as our ancestors once did, we should eat based on how we are genetically wired to eat."

That means out with processed foods along with "dairy, legumes, any form of sugar, and grains!" Grains? Fragoso writes that they "are gut irritants, especially grains containing gluten such as wheat, barley, and rye. When our gut lining gets irritated, we are unable to properly digest our food." So bread is out. But it's okay to bring home the bacon since the right kind of fat is not bad. Fat is not what is making Americans overweight, it's the "non-fat, high-carb diet."

For those who want to try paleo at the family level, Fragoso has written an intensely practical guide. "Everyday Paleo: Embracing a Natural Diet & Lifestyle To Increase Your Family's Health, Fitness, and Longevity" ($29.95 in softcover from Victory Belt Publishing) tells what happened when she, her chiropractor husband, and three kids embraced the paleo idea. But that's just the beginning.

Fragoso will be signing copies of her book, and talking about the paleo lifestyle, at 7:00 p.m. this Wednesday, June 8 at Lyon Books in Chico.

The largest part of the book is a compendium of recipes (including shopping lists for trying "30 days of paleo") that will feed the entire family. Recipes (with full-color illustrations) include "perfect pork pot roast," "everyday meatloaf," and "Thai shrimp soup" (with more recipes available at http://everydaypaleo.com).

The last section introduces basic fitness showing the author's family in a series of full-color, step-by-step moves from "stroller sit-ups" to "partner push-ups." There's a chapter on fitness for kids and one on "advanced body weight and bar movements" (for those a little more advanced), as well as a series of beginning and intermediate workouts.

How about cheating on eating? Fragoso recommends a strict adherence to the paleo diet the first thirty days--no gluten--but she's a realist. Readers will respond to her verve--and honesty.