"Paradise Isn't Lost: Embracing Resilience In The Face Of Loss" 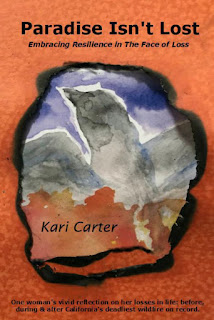 The fires have come again, and so have loss and grief. A new memoir aims to show a way forward.

Former Paradise resident Kari Carter had moved to town three months before the Camp Fire. On that fateful day, "I got out with a leather duffle bag, my little dog Reese, my car, and with a couple of neighbors ... just minutes before roads turned to gridlock. From my cousin's living room in Chico, a handful of us watched the harrowing news footage of flames ripping through neighborhoods." Her place at Vista Village, she learned later, had turned to ash.

But her memoir isn't about "the horror of the event itself." It's just one of many losses she experiences ("I thought I had lost about everything a person could possibly lose in my sixty years of living") but the fire drives her to look more deeply within at her own responses and, she writes, to find the inner resources to continue on.

"Paradise Isn't Lost: Embracing Resilience In The Face Of Loss" ($16.50 in paperback, self-published, karicarterparadise@gmail.com; also for Amazon Kindle) is a clear-eyed chronological narrative dealing with loss before the fire, the fire itself, and, in the third part, "In Search of Meaning."

"I'd been a single parent and capable householder for fourteen years before meeting Randy," whom she married in 2000. Eventually they moved to Oroville to be close to his job at Feather Falls Casino, and she felt joy attending the Center for Spiritual Living. The group met monthly in Paradise and that became her introduction to the town she would later call home.

There are losses, from family members to precious possessions, even her marriage. Yet she finds resilience.

"The more I looked at resilience, the more I could see its connection to loss and grief. It doesn't matter what type of loss. Loss is anything that leaves a hole in one's heart. And loss comes with living. But the way our losses are grieved—or avoided—is another matter. The way in which grief is experienced and processed, influences whether we get stuck, or move forward."

In this book Carter moves forward. 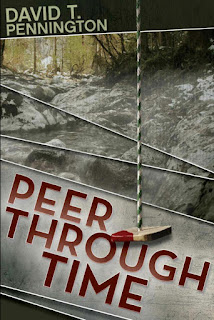 David T. Pennington (davidtpennington.com), who works as a computer data analyst in San Francisco, has deep roots in Paradise. According to correspondence received from his mother, Mikki Ashe, "(married to Terry Ashe), formerly of Paradise (yes, of the Terry Ashe Recreation Center)," their son graduated from Paradise High in 1986.

Pennington has written a mind-bending science-fiction thriller. "Peer Through Time" ($12.99 in paperback, self-published; also available as an audiobook and in Amazon Kindle format) is the first of a planned series ("Gravity's Loop" is already published). The story mixes several science-fictional plot devices (wormholes as time portals; mind transfer; the creation of synthetic humans) into a complex tale of murder and mystery.

A small Northern California town named Heaven's Highest Hill (Triple H), a couple hundred miles from San Francisco, plays a key role since, as a news announcer puts it, "the body of resident Sara Drake was found early this morning inside the local branch of Peer Therapies." It is 2079; Peer Industries provides memory simulations for clients so they can relive past moments, and Peer Therapies provides a psychotherapist android, named Kass (now accused of murder).

The town is also the source, in a nearby creek, of a wormhole and its other end that can take a person back in time or into the future. The way it works is that one does not meet one's earlier (or future) self, but displaces that person. Spencer Westmoreland (Sara's ex-husband) discovers the wormhole and, according to one Carmela Akronfleck, "Spencer said he met me in the early 1980s. I was an old woman and I lived in a house known to the neighborhood kids as the Witch's House."

But in 2079 Carmela (whose real name is Carrie Dolphin) is twenty-eight. Yet to come is a long trip back to the late 1930s where she falls in love and receives a series of cryptic messages, the killer's hit list which now targets her mother and sister in 2079. When Carmela discovers who the real killer is, she is able to track down a woman pregnant with his ancestor. What should she do? Can she absolve Kass?

It's a wild ride, and it's not finished yet. 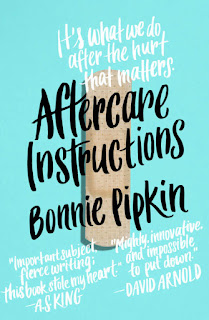 Genesis Johnson, the narrator of the emotionally searing debut novel from Chico writer Bonnie Pipkin, will grab readers and not let them go. Johnson is almost eighteen, a student at Point Shelley High in New Jersey, and she is pregnant. Her boyfriend, Peter Sage, has driven her to a Planned Parenthood clinic in Manhattan for an abortion, a choice, she feels, both of them have made together. But once it's over, Peter is gone.
"I found out by walking into the waiting room, scanning a sea of hopeful eyes, and finding absolutely nowhere safe or familiar to land. In that moment, I was thrown into the deep, deep water. And in the deep, deep water, there is no way to breathe. Yet somehow, something propels you forward. Survival mode, I think it’s called."
"Aftercare Instructions" ($10.99 in paperback from Flatiron Books; also for Amazon Kindle) takes its chapter titles from the materials Genesis is given, including "Monitor Bleeding," "Recovery Times May Vary," and "You May Experience a Wide Range of Emotions." Each chapter ends with scenes from a play that provide the back story, how Genesis comes to connect with Peter, a conservative Christian, son of a prominent prolife mother.
Genesis' family? She cares now for her mentally unstable mother; her playwright father killed himself through a drug overdose (though her relatives will not admit it) and rumors abound at the high school.
As the novel charts the course of the most significant week in Genesis' life, she feels she is in someone else's play.
She confronts Peter. "This is the moment where the whole stage is dark and a weak spotlight focuses on these two people who fell in love with each other, who made promises to each other, who don't know which direction to turn, who lost the last pages of their scripts and have to improvise now."
Wither their relationship? Matters are complicated after Genesis' chance encounter at a party with an attractive young actor named Seth who invites her to an off-Broadway audition. Just whose play is she in, anyway?
"There's so much that will hurt us," Genesis recognizes. "It's how we take care of ourselves afterward that matters. The aftercare."
Posted by Dan Barnett at 9:00 PM

"Coming Home Whole: A Draftee's Foretold Journey To And From Vietnam" 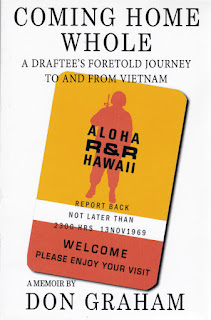 Don Graham retired from Chico State in 2007 as the university's Associate Vice President for Student Affairs (he and wife MaryAnne now live in Sonoma County) but his Chico State connection goes back decades.

In the summer of 1968, he writes in his well-crafted memoir, Chico State had accepted him into the master's program in psychology, and he and MaryAnne "would be renting a very small house at something-and-a-half Cherry Street" near campus.

Though his draft board had been hounding him even as the U.S. War in Vietnam raged he was confident he'd be safe. As MaryAnne continued packing at their Napa home, Graham drove north on Highway 99 toward his destiny. It did not go as planned.

The story is told in "Coming Home Whole: A Draftee's Foretold Journey To And From Vietnam" ($13.99 in paperback from Valley of the Moon Press). A car accident sends Graham back home; that same day he receives a draft notice. Alice at the draft board tells him: "'Don ... if the quota for Napa County next month is one person, you're it.'"

His choices are few. Canada was unappealing; he didn't have a history of conscientious objection (though years later he and MaryAnne would work in the peace movement); he didn't really want to maim himself to get 4F status; he didn't want to go to prison. So, he writes, he gave up, was drafted on election day in 1968, and promptly ushered into the Army.

What follows is not a gruesome tale of war but rather a series of meaningful "coincidences." Graham had sensed a kind of spirituality ("some immensely powerful force") watching over him, mediated by his mother, her spiritual mentor David (who had died), and a psychic who predicted he would return whole from the war.

He is assigned artillery duty in Vietnam, but he and his friends survive. R&R is in Hawaii where a kidney stone attack brings him to Tripler Hospital in Honolulu and a military job away from the war.

"How is this possible?" he asks himself in this story of a grateful young man amidst the twists and turns of life. 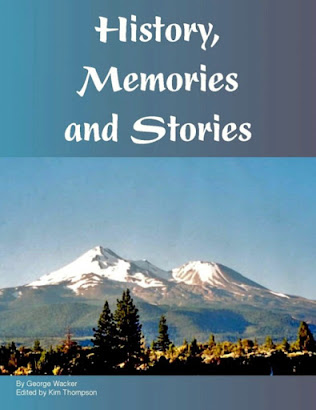 Kim Wacker Thompson writes me about her father, George Wacker. He "was a lifetime resident of Yreka. He was mayor, county supervisor, and businessman, and was known for his stories." Now, after many requests, she has gathered his writing into book form. It's a labor of love that shows George's penchant for the whimsical side of Siskiyou County history, and it's a delight to read.

"History, Memories And Stories" ($9.95 in paperback, self-published; also for Amazon Kindle), by George Wacker, edited by Kim Thompson, begins with an account of the short life of the State of Jefferson in 1941 and ends with the short story (presumably based in reality) of meeting the great Babe Ruth on October 23, 1921, when the Bambino visited young Wacker's 6th grade class in Yreka.

Wacker was fascinated by the effect the Gold Rush and subsequent mining operations had on his beloved town. "When gold was discovered at Yreka in 1851," he writes in the "Memories" section, in a piece called "The Tunnels Under Yreka And The Little Men," "Yreka Flats was dubbed the 'Richest Square Mile' on the face of the earth. And rightly so, for the precious metal did lie on top of the ground and down through the gravel to bedrock."

A few years later, though, with the earth scoured of surface gold, mining turned to tunnel-making so the underground quartz veins could be extracted and crushed to release the gold, and it turns out Yreka is criss-crossed with tunnels. And: "It is thought by some 'believers' that after the extensive labyrinth of drifts had been completed and abandoned it was at this time that the Little Men moved in and began to inhabit the tunnels."

There were other Yrekan denizens: chickens. Those raising backyard chickens destined for Sunday dinner would carefully examine the gizzards for the shiny metal. "And the gizzards did yield a small nugget often enough to excite every housewife around."

There are accounts of the last train robbery in Siskiyou County, miners' practical jokes, invading bears, tragic murders, the high school rivalry against Dunsmuir, the Chinese in Yreka, and "The Great Watermelon Heist."

These nuggets of history and memory shine brightly.