Something in the fish: Chico State University alumna writes on the dangers of mercury 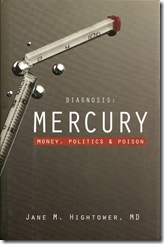 "When I began investigating my patients' elevated blood mercury," writes Jane Hightower, "I sought to gain a clear understanding of how mercury affects one's health. When information was not at my fingertips, I wondered why. What began as an investigation to help me diagnose mercury-related symptoms in my patients grew into another diagnosis--that of a broken, misused, and abused regulatory system."

Hightower, a Chico State University graduate, is a board certified San Francisco-based physician specializing in internal medicine. Her quest began with a patient in 2000 who exhibited fainting spells, "intermittent stomach upset, headache, fatigue, trouble concentrating, and hair loss." Other patients had similar complaints, and one other similarity: They all seemed to be fish lovers. Hightower, "who had a penchant for sorting out unusual or difficult cases," found herself embroiled in controversy beyond what she might have imagined.

The story is told in "Diagnosis Mercury: Money, Politics & Poison" ($24.95 in hardcover from Island Press) by Jane M. Hightower, MD. The author, recently in Chico for a book signing at Barnes and Noble and a talk at the university, became suspicious when she found that the various agencies charged with protecting public health disagreed among themselves about the dangers of mercury.

"Why did the EPA say that less than 5 mcg/l (micrograms per liter) of mercury in blood was our protective level, while the authorities in the California Public Health Department told me that you could have a level of up to 200 mcg/l will no ill effects? As for the FDA," there apparently was no "standard for human blood levels on its Web site. That was particularly disturbing because . . . the FDA had jurisdiction over all of commercial fishing." Some of the numbers were based on mercury poisoning incidents in Iraq decades ago, some on judicial fiat, and all on very little science.

Elevated levels of methylmercury (the organic form of the element) were finding their way into the human population. "Bodybuilders and dieters who consumed large quantities of canned albacore tuna and other large fish were also on top of the mercury gauge among patients in my practice."

The book is measured, data-driven, careful in its recommendations, and scarier than any Halloween goblin.

Paradise Town Manager find his muse in poetry and story 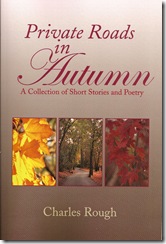 Chuck Rough, Paradise Town Manager for more than a dozen years now, is also a creative artist. His first published book, a collection of poems, short stories and the first ten chapters of a new novel, will be christened tonight at a book launch party in Paradise, and then sent out into the world. (For more information, contact the author at clroughjr@sbcglobal.net.)

"Private Roads in Autumn" by Charles Rough ($19.99 in paperback from Xlibris Corporation, www. xlibris.com), available at Lyon Books in Chico, is about perspectives. The story that ends the collection, "Sitting At the Bus Stop (In the Sun)," offers a coda of sorts for the rest. Somewhere, "on the corner of Fifth and Broadway," a man from "the old country," recently homeless but now a dishwasher living in a shared flat, waits for the crowded bus.

Others gather at the corner; "most kept to themselves and waited, staring blankly into the day ahead. . . . Each person had their own story to tell, to hide, or to change as the mood, situation, or years dictated--a story that was unfolding with the ending still in doubt, or more certain than any other truth in their lives."

In "Journey's End," the poet picks up the theme, making it more personal, at a "weather-beaten pier" somewhere near the Pacific Coast: "Looking upward, / the first glimpse of a new day's sky / struggles to break through the darkness; / its fate in this part of the world / presiding over an ocean, / whose calm surface betrays / a relentless undercurrent. // And all the while, / the restless heart of a poet / finds itself struggling, / to navigate a course / that holds itself in check."

The stories feature restless hearts suffused with loss. In Honorable Intentions, set in 1962, Sergeant Jefferson must deliver devastating news to a soldier's family. There is another soldier in "Journeys," though he is not what he seems to be. In "Second Chance," a man knows where the bodies are buried. Literally. In "Conversation with a Troubadour," the narrator gets his groove back. By turns meditative and suspenseful, Rough's work takes the reader down twisty autumn roads, multiplying delight as the leaves--and pages--turn. 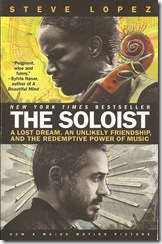 This year's Book in Common project, which officially began last month with a presentation at Chico City Plaza, continues through the spring with book club discussions and a variety of other community activities.

The featured book, "The Soloist" ($15 paperback from Berkley Books) is by Steve Lopez, a columnist with the L.A. Times. It recounts Lopez' growing friendship over a two year period with a paranoid schizophrenic street musician, Nathaniel Anthony Ayers, who had played classical bass at Julliard thirty years before. (A film of the same name stars Jamie Foxx and Robert Downey Jr.)

This coming Wednesday, Oct. 21, your humble columnist is scheduled to co-host a discussion of the book with Nancy Wiegman in a special edition of her "Nancy's Bookshelf" program on KCHO (Northstate Public Radio, 91.7 FM) from 10:00 - 11:00 a.m. Guests include Book in Common representatives from Butte College and Chico State University, though many other organizations are participating this year. (Updates are available at http://www.norcalblogs.com/soloist/.)

Much has been made of the themes of homelessness and mental illness that pervade the book, but readers should know that it is also about self discovery. As Lopez says, "one reason I write a column is for the privilege of vicariously sampling other worlds, dropping in with my passport, my notebook and my curiosity." Fair enough, but the musician gets under his skin: "Nathaniel turns my gaze inward. He has me examining what I do for a living and how I relate to the world as a journalist and as a citizen."

There is more: "I experienced the simple joy of investing in someone’s life, and the many frustrations have made the experience all the more rewarding and meaningful. I might not have always made the right choices in trying to help, but I came by each one honestly. I worked through the arguments for and against commitment. I wrestled with definitions of freedom and happiness, and wondered at times who was crazier—the man in the tunnel who paid no bills and played the music of the gods, or the wrung-out columnist who raced past him on the way home from sweaty deadlines to melt away the stress with a bottle of wine."

A haunting question, and not just for columnists.

Orland novelist's tale of Mayan intrigue has a contemporary moral 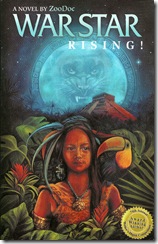 In 1990 Orland resident Ronald Petty explored the Mayan temple Xunantunich, "in Belize, near Guatemala," he writes, pronounced "SHOO-nahn-TOO-neech." Later, as an encouragement to his daughter, facing an illness that would take her life, Petty wrote a story about a Mayan princess, also afflicted, who must find the meaning of her days.

That story has become "War Star Rising! The Legend of Toucan Moon" ($15.95 in paperback from Star Publish LLC), a young adult novel set in the year 850, in the Yucatan Peninsula, with a decidedly contemporary sensibility. Petty, writing under the name ZooDoc (www.zoodoc-stories.com), tells of a peasant girl named Honeybee chosen, with her widowed mother, as the new family of the great emperor Kamenkamen. Honeybee is renamed Toucan Moon after the moon goddess provides another sacrifice in place of the child. The young princess, approaching her teenage years, is about to change Mayan civilization.

The author will be signing books this Saturday at 2:00 p.m. at the Chico Barnes and Noble store; the public is invited.

"War Star Rising!" (the reference is to the ascendency of Venus and an impending attack from a nearby Mayan kingdom) is billed as a "historical fantasy adventure." In ZooDoc's imagined world the great beasts, the jaguar and the condor, watch over the affairs of humans. It is a world in which Toucan Moon, who has gained the love of her adoptive father, can convince him that the will of the gods is for a "new law."

"I think human sacrificing is barbaric!" she tells her nursemaid. "That is why we constantly have wars, do you not know? To enrich the plundering victors and to gather slaves for hard word and sacrifices. . . . I remember how awful it was to find out that the father of my best friend was killed in some stupid war, or the mother of someone was sacrificed to appease the sun god, and everyone said it was . . . so stinking honorable."

Honeybee herself is subject to terrible seizures, and must journey to the Cave of the Wise One to find the meaning of her remaining days. The legend ever after tells of a brave princess who found "lasting peace for the chosen ones who show love." 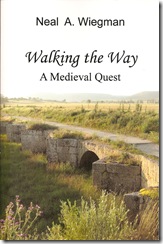 It's called "furta sacra," holy theft, and when a warrior knight steals two thorns, relics of Jesus' Crown of Thorns, from a monastery in the Pyrenees, a young man undertakes the task of recovery. He is eighteen-year-old Xavier Elgorriaga of Pamplona, "tall, slender, and handsome with the tawny skin of a Basque," a reverent and good-hearted soul eager to test his manhood on the Way as he journeys to the fateful meeting with the knight, fighter of Moors.

The "Way" is the Way of Saint James or Camino de Santiago, "the 500-mile medieval pilgrimage route from the Pyrenees across northern Spain to the Compostela Cathedral" where pilgrims venerated the bones of Sanctus Jacobus, hoping to find "remission of sin and induce the saint to intercede with Christ or Mary on their behalf." The trek was fraught with danger from bandits, disease and inhospitable weather.

Chico writer Neal Wiegman, an expert on Spanish literature, traveled the Way with his wife, Nancy (the host of Nancy's Bookshelf on Northstate Public Radio, KCHO, who recently interviewed your humble columnist for an upcoming program). "Walking the Way: A Medieval Quest" ($17.95 in paperback from WingSpan Press) by Neal A. Wiegman uses the fictional Xavier to paint a detailed picture of life along the Way in 1160. It is travelogue filled with exalted churches and spiritual epiphanies, stork lore, true love, jousting, a disquisition on dung and, later, a pirate attack.

Wiegman will be presenting a slide show and book signing tonight at 7:00 p.m. at Lyon Books in Chico.

The author imagines Xavier as a jongleur, "a teller of tales," gifted with a facility for languages and a prodigious memory, allowing him to recite sections of Beowulf, the Chanson de Roland, and tales of El Cid, the Spanish hero, and portions are included in the narrative.

Xavier also carries with him the Liber Sancti Jacobi, The Book of St. James, which includes a guidebook for the Way, enabling Wiegman to blend period sources with his own observations. The resulting account, each chapter of the novel devoted to one of the dozens of stops along the Way, offers a nuanced and captivating tour filled with sights, sounds and smells.

It's a tasty stew, good with wine.