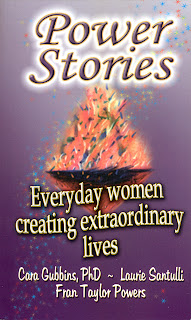 "When I was a junior in high school," Chicoan Cara Gubbins writes, "and had the opportunity to be a volunteer on a research project studying communication between people and wild dolphins, I jumped at the chance.

"On the day before we were to sail home, a huge group of at least 30 dolphins surrounded the boat. Everyone raced into the water. Dolphins of all ages and sizes surrounded us. Mothers whizzed past me with their calves in tow; juveniles swam in large packs, circling the swimmers while remaining a few tantalizing inches away from outstretched hands; older dolphins cruised the perimeter, eyeing the humans and watching for danger. ... Back on the boat, I knew that I had found my calling."

But the journey to a doctorate in biology was not the straight path Gubbins might have imagined. Personal tragedy intervened, her self-confidence withered and her dream died. But later, when a "summer job as a rafting guide" turned full time, her ability to face dangers restored her sense of self. She accomplished her goal.

Gubbins' account, "On Becoming a Scientist," is one of almost two dozen inspirational life tales collected in "Power Stories: Everyday Women Creating Extraordinary Lives" ($20 in paperback from JADA Press or www.powerstories.com). Gubbins, who teaches biology at Butte College and is a Powerstories workshop leader, edited the volume in conjunction with Laurie Santulli and Fran Taylor Powers.

Santulli, now an executive consultant, realized her own dream of becoming a bodybuilder. Powers founded the Powerstories Theatre in West Tampa, Fla., in 2000, where, as Powers writes, "seven amazing women, most without any stage experience, were selected to perform in our first show, 'Let the Stories Move You.' For eight months we wrote and re-wrote our stories, memorized lines from the script I wrote to link our lives together, and learned to sing and move on stage." It was a resounding success.

Powers and Santulli tell their own stories in the book, a celebration of what might be called realizing the potential within. Rose Bilal, in "Don't Blame the Road," writes about being molested as a girl but triumphing over fear -- and prison; Iranian-born Afsaneh Noori (her first name means "fairy tale") talks of finding "Power Within"; Lisa Shannon tells of the death of her older brother, Scott, and discovering how to keep life "juicy and flowing."

And Ellen Winner, breast cancer survivor, finds the lighter side of turning 50. She quotes a birthday card: "Don't worry; you're not having hot flashes. It's your inner child playing with matches!"

Posted by Dan Barnett at 7:52 AM No comments: 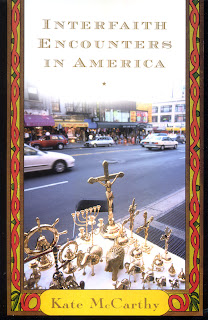 Kate McCarthy, associate professor of religious studies at Chico State University, has done us all a great service in her survey of "Interfaith Encounters in America" ($22.95 in paperback from Rutgers University Press). Her research led her to examine several interfaith Web sites (including Beliefnet.com), conduct interviews with 14 people "involved in interfaith partnerships" and compare the Chico Area Interfaith Council with the more urban Interfaith Conference of Greater Milwaukee. Prefaced by an examination of scholarly work on the way religions see the "other," the book is generous, deeply honest and marvelously readable.

"Interfaith projects & bring Christians, Jews, Muslims, Hindus, Buddhists, Sikhs, Pagans and others into conversation. But more subtly, they also expose the internal diversity of each of these traditions. In Chico & one Catholic church participates in the interfaith organization, another does not.

"As a Roman Catholic Christian," McCarthy writes, "I am also acutely aware of being a woman, which makes me in many ways an alien in my own tradition. & At the same time, I also inhabit, among other things, feminism and American political liberalism." Those who participate in interfaith community groups tend toward progressive politics and liberal religion. More conservative religious leaders, such as evangelical pastor Larry Lane of Chico's Neighborhood Church, tend to stay away. Why? McCarthy's long interview with Lane leads her to conclude that interfaith groups suffer from a perception problem. The reality is that "most members of community interfaith groups do not espouse the kind of pluralism that deems all religions equal or essentially the same."

Nevertheless, "too often, interfaith enthusiasts dismiss the efforts of dogmatically committed people of (usually Christian) faith on the assumption that anyone who believes anything that strongly must be closed to the enriching possibilities of conversation with a religious other." Interfaith groups focus on good works and "it was perplexing to me & to see how little conversation about religion was to be heard in their gatherings." The real place of negotiation between and among diverse religious traditions may be in interfaith marriages and on the Internet.

In the end, "It is worth attending & to the lessons from these encounters as we plod through what is coming to feel like our interminable culture war. They are relatively simple: (1) Be quiet and listen. (2) Find a point of connection, but not too many -- allow the other to remain other. (3) Enter deeply into your own religious identity, with all its difficulties and ambiguities. (4) Don't just talk; find something to do." 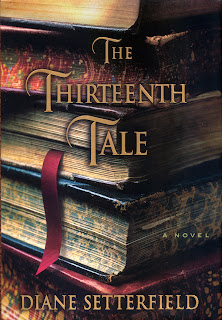 Jill Tanner, born in England and trained at the Royal Academy of Dramatic Art, plays Vida Winter, a reclusive writer, a modern-day Dickens, in Diane Setterfield's "The Thirteenth Tale."

Published in hardcover ($26 from Atria Books), and scheduled to come out in trade paper in September, this first novel was a featured selection at Barnes and Noble stores across the nation. It's ideal for local reading groups and a great beach read (but more suited to old libraries where "Jane Eyre" jostles with "The Adventures of Sherlock Holmes").

When Winter, aging and infirm, invites antiquarian bookseller Margaret Lea to be her biographer, Margaret hears an extraordinary and complex tale of green-eyed twins and families gone awry as Vida narrates what she calls "a ghost story." Margaret Lea is played to perfection by Bianca Amato, and the result is a 16-hour escape into a world where shadows lurk, the mists obscure one's vision, and the very nature of the story keeps the reader guessing.

The unabridged audio version is available direct from Recorded Books (www.recordedbooks.com) as cassettes or CDs or as a download to an iPod or other MP3 device through Audible.com. (Audible's license allows downloading to multiple computers and iPods.)
I couldn't stop listening. The book begins with a quotation from Vida Winter herself: "All children mythologize their birth. It is a universal trait. You want to know someone? Heart, mind and soul? Ask him to tell you about when he was born. What you get won't be the truth; it will be a story. And nothing is more telling than a story."

But is Winter's story the truth? As more and more of her past is revealed, the pieces seem less and less to fit. Who is she? Who was she?
And then, after months of trying to put the picture together, Margaret knew: "I stopped dead in my tracks. For my mind, racing ahead of itself in a momentous act of premonition, had already submitted to this revised version of events. In a single moment of vertiginous, kaleidoscopic bedazzlement, the story Miss Winter had told me unmade and remade itself, in every event identical, in every detail the same -- yet entirely, profoundly different."

The performances are superb and lend gravitas to the unfolding tale. Entranced, I listened to the entire recording over two days, spending hours glued to a chair long after bedtime. The shadows were dispelled, but the emotional impact of the listening experience still lingers. If you're new to audio books on your iPod, start here.

Posted by Dan Barnett at 9:54 PM No comments: 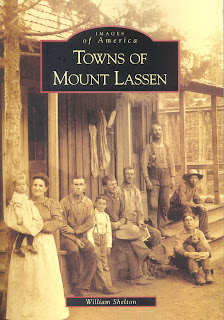 "During the 1915 eruption (of Lassen Peak), Alice Olson and neighbors were fishing on Summit Lake. As smoke and ash intensified, they were forced away from their cabins. Crossing a part of the already devastated area, they led their spooked animals and went to Lyonsville, not returning until the following spring." (That's when Olson "spotted a hole in the shingled roof, and upon entering & found a hole in the kitchen table and a five-pound volcanic stone embedded in the floor.")

History is embodied in this caption, which appears underneath a picture of the simple cabin, and it is unfolded in "Towns of Mount Lassen" ($19.99 in paperback from Arcadia Publishing) by William Shelton. Part of the "Images of America" series, the book includes more than 200 black-and-white photo-graphs, most from Shelton's collection.

According to a news release, Shelton himself "is the curator of his own museum which houses his families' collection (Gathering Grounds Museum in Durham) as well as the Bruce Mansion in Chico." A retired logger with roots in the California timber industry going back six or seven generations, Shelton is "also retired from a second career in law enforcement."

Olson, of Red Bluff, was the author's great aunt; Shelton writes that she "homesteaded on Grassy (Horseshoe) Lake and named Jakie Lake for her son, Jakie Olson."

The book begins with several mesmerizing images of the mountain, which is actually misnamed in the book's title (it's Lassen Peak).
But the story is really about people, and the photographs from the late 19th and early 20th centuries, taken in Lyonsville, Knauss Ranch, Engebretsen Town, Shelton's Camp and other locations, give a glimpse into the difficult life of logging.

Tidbits abound. "Samuel Westrope was born in Grants Lick, Kentucky (in) 1813, and was a cousin of Daniel Boone. Arriving in Chico & in 1864, (he) did not fit into city life, so he sold the family's home and came to what is now Mineral."

Another passage: "The greatest court trial in Tehama County history to this point was over whether Thomas J. Shelton Sr., who was accused of 'stealing and carrying away' 12,600 pine shingles from J.R. Markley, was guilty. He was consequently found not guilty for lack of evidence. This was mainly because the shingles in question had disappeared, having been flumed down to the Sacramento River the previous night."

Trestles, train wrecks, Dolbeer Donkey engines, the Champion Mill -- they're all here, in a volume that ends with a serene picture of the sleeping mountain, 31 years after the eruption.