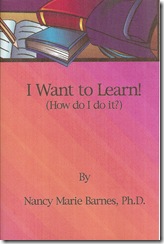 Nancy Marie Barnes writes that "service to others" is her guiding principle. The retired Paradise educator has published a series of books "for sharing with and helping others . . . in assisting interested persons, young and old, in being the best they can be." The resonance with the new Administration's emphasis on service and responsibility is clear, and "old school" readers will be heartened with Barnes' conviction that traditional values are just as applicable as ever to the multimedia generation.

Barnes uses Amazon.com's print-on-demand "CreateSpace" service to publish her books, uniformly priced at $9.99 in paperback, which now include two series. The first is fictional conversations with "Great-Grandma-Nanny," written under the name of Nancy-Marie Van Stavern. "Secret, Magical Conversations" includes great-grandma-Nanny's advice on everything from manners ("Don't cuss!") to sex ("Have sex only with your spouse. Period. No exceptions.")

"As you can tell," Barnes writes about great-grandma's "politically incorrect manner," "she speaks her mind but please remember that she'd never hurt your feelings for the world. . . . She believes that poor decisions in life can be used to make better decisions in the future. " A second book, "The Art of 'Doing The Wash,'" discusses sorting, washing, ironing and mending, complete with step-by-step instructions.

"I Want to Learn! (How Do I Do It?)" is part of a second series that includes "Be Happy! A Guide to Happiness," "An Employment Primer: A Guide to Getting That Job & Keeping That Job" and "Can I Really Afford It? A Guide On How To Budget & 'Live Within Your Means.'" (For more information, write the author at P.O. Box 1503, Paradise, 95967.)

There's no shortcut to learning, Barnes writes. "The average person takes upwards of 11 times (or 'exposures') of studying something new and difficult to fully learn it. The above average person takes about 5 times, while a slower person could take 15 to 30 times. It just takes effort, patience, and perseverance." The key is determining one's learning style and setting up one's desk or room to take advantage of seeing, listening, or writing. She advocates the SQ3R technique: "Survey, question, read, recite, review." Review is especially important to master the material.

Along the way Barnes is straightforward and encouraging, sharing her teacher's heart. 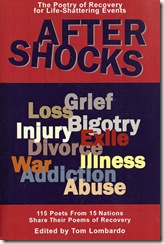 When Tom Lombardo's wife lost her life in an auto accident in 1985, he was left "a widower in my early 30s. . . . Reading poetry gave me solace during the early stages of my grief." Later he turned to writing poetry himself. "My first poems dismantled whatever blocks I had constructed, and from that point, I visited my grief and wrote."

Lombardo--a WebMD founder who lives in Atlanta--created an anthology of contemporary poetry to aid in the journey. As editor, he writes, "I searched for poems in all categories that contained a message of recovery through the language of poetry: Grief, War, Exile, Abuse, Divorce, Addiction, Injury, Illness, Bigotry, Loss of Innocence."

"After Shocks: The Poetry of Recovery for Life-Shattering Events" ($19.95 in paperback from Sante Lucia Books), available at Lyon Books in Chico, collects work from 115 poets and fifteen nations. Included are pieces by three northstate residents.

Skyway poet Joy Harold Helsing writes in "Turnabout" about an abusive relationship: "I scream without sound / till my throat burns // Imagine he's small / my therapist urges / the way you felt // I picture him shrunken / six inches high / a dictator doll. . . ."

Grass Valley poet Gail Rudd Entrekin, in "Michelle," writes of a woman who tells the story of a man she saw beat his child and of the police who didn't come "until after the two had driven away." She laughs "inexplicably." "Leaving the restaurant, someone / holds the door for her. People fall back / and away, avoiding her circle of despair. / But two women who know she has lost a child, / walk close, their hands gently touching / her back, taking her arms, leaning their / warm bodies into hers."

Patricia Wellingham-Jones, who helps direct the writing group at the Enloe Cancer Center in Chico (see http://tinyurl.com/9w5alr for an interview), writes in "Your Shoes," "Barbara the Hospice nurse / tossed your shoes / under my office chair / when we carried your body / wrapped in your sheets / out to the gurney / I feel comforted every time I look / at those shabby shoes. . . ."

Comfort, after shocks, may come in the smallest of ways.

Chico novelist's tale of university freshman hijinks is something more 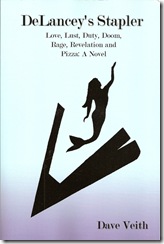 The story takes place, the narrator says, "at the U- of C- at D- in the spring of the year 196-" but the name of the school is not important; more important is that "a War was going on. . . . It was going on overseas in jungles and rice paddies. But every day there was increasing evidence that it was a real War, even though it had never officially been declared."

For Roger Osborn and his gaggle of freshman buds the war is a distant reality, though not the fear that some of them might be whisked away to fight in it. They must keep the draft board at bay and learn how to live together in Glen House, "the university's euphemism for the World War Two army barracks set under the trees like rows of gray two-story shoeboxes."

Such is the setting of "DeLancey's Stapler: Love, Lust, Duty, Doom, Rage, Revelation and Pizza" ($17.98 from AuthorHouse) by Dave Veith. The author writes me that he's retired, in his mid-sixties, and "originally came to Chico in '53, attended Chico High ‘62 and UC Davis ‘66, worked primarily as a systems analyst in the Bay Area, moved back after 44 years, married with four grown kids. My father Donald Veith taught English at Chico State. My mother Lois McDonald wrote several books on local history, including 'Annie Bidwell: An Intimate History.'"

The publicity release captures the scene: "Professors profess from the pulpits of various disciplines, a neon mermaid throbs in the night sky at the apex of the business district, and the latest Girl of the Month appears like clockwork in brazen glory on the wall above Roger Osborn’s Love Candle." Stapled there, one might add, by Lawrence DeLancey's stapler. There's a late-bloomer kid called The Gnat, who feels like one when he sees the immensity of the night sky. There's knockout Shelly Wenceslas and the beauteous young housemother Susan Thurlby to stir things up.

The book is like one of those crude college movies without the crudity (though testosterone abounds) and in the end it's something more, a meditation on the importance of comradeship in the midst of war or the shock of random events. Veith is a writer to watch. Chicoan Kristan Leatherman is the co-author, with Jim Fay, of "Millionaire Babies or Bankrupt Brats?" ($24.95 in paperback from Love and Logic Press, Inc.). Fay is co-founder of the Love and Logic Institute (www.loveandlogic.com). Leatherman, a counselor, educator and facilitator, has taken the "love and logic" principles and applied them to the financial arena. The goal is to raise responsible children. "Love," the authors write, "allows kids the latitude to learn from their mistakes. Logic allows kids the latitude to learn from the consequence of those mistakes."

The book is available at www.MillionaireBabiesOnline.com or through the co-author at kristanleatherman@sbcglobal.net.

There are only two rules of "love and logic." In the first, "adults set limits without anger, lectures, threats, or repeated warnings." In the second, "When children cause problems, for us or anyone else, adults hand the problem back to the child in loving ways. We hand the problem back by replacing anger and lectures with a strong dose of empathy, followed by a logical consequence or by requiring the child to solve the problem he or she has caused."

The first part of the book is devoted to spelling out the principles of "love and logic" by teaching personal responsibility in the handling of money. The second part, "Raising Fiscally Fit Kids," builds on the first and examines spending, saving, borrowing, earning, investing, and sharing.

The book is replete with everyday examples of parent-child interactions and offers a wealth of sometimes surprising suggestions for handling money challenges.

Allowance, the authors suggest, is really about helping children spend money and shouldn't be given as payment for chores; chores, in fact, are renamed "contributions" and shouldn't be compensated if they're part of the daily family upkeep. If a kid flakes on cleaning his or her room, and mom has to do it, the child will receive a bill in the next allowance envelope. Think "consequence."

The bottom line? One day, when parents must rely on their children for care, those good fiscal habits will be invaluable.

Northstate writers and those with local connections were busy in 2008.

Poetry was well represented: "The Solipsist" (Troy Jollimore), "Places to Sit and Other Poems" (Tom Fuszard), "Donner: A Passing" (Shana Youngdahl), "Sustenance: Poems By Chico Poets In Celebration of the California Nut Festival," and "Walk Into the Wind" (Elizabeth A. Bernstein).

Memoirs? "Jailhouse Journal of an OB/GYN" (Bruce Steir), "Sweepings From Under the Rug" (Dick Cory), "Mourning Has Broken" (Jan Hasak), "Code Two 'N' A Half" (William W. Wilhelm), "100 Miles" (Daniel Thomas), “Flashbacks From Here and There . . . : Pages From the Journal of An Adventure Traveler” (Nick Ellena), "A Place in the Shower Schedule: 101 Favorite Columns" (Roger Aylworth) and "Travels With Cornbinder" (Robert Woods).

History, too: "Images of America: Durham" (Adriana Farley and Jan Holman), "Images of America: The Land of Orland" (Gene H. Russell), "Saga of a Mountain Meadow: A History of Bucks Ranch and Bucks Lake" (Scott J. Lawson), and “The Poetess of Song: The Life of Mary Shindler 1810-1883” (Linda Sundquist-Nassie).

For kids there were "Bigfoot and Joshua" (Bob and Peggy Bishop), "Engine Ed's Colorful Train" (Bonnie Worthington), and “To Grandmother’s House: A Visit To Old-Town Beijing” (Doug Keister).

In the religion/spirituality category: "Holy Cooperation!" (Andrew McLeod), "Animal Omens" (Victoria Hunt), "Together Under One Roof: Making a Home of the Buddha's Household" (Lin Jensen), "Children of Immortal Bliss" (Paul Hourihan, edited by Anna Hourihan), and "Living As Ambassadors of Relationships" (James Wilson).