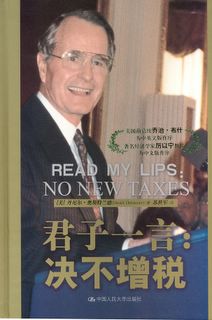 In 1999 Butte College history instructor Dan Ostrander published "'Read My Lips: No New Taxes.'" The book, reviewed in this column, defended George H. W. Bush's signing of the "budget deal of 1990" which, writes the former president in his foreward, "included budget cuts and a tax increase of almost $500 billion (over five years). ... Along the way, I lost the support of many people in my own party, and also had to break my pledge of 'no new taxes' from the 1988 campaign."

Rather than see this as a failure of leadership, Ostrander celebrates the budget deal as the triumph of political pragmatism in which a leader rises above partisan commitments to do what is best for the country -- at great political risk to himself.

It was this pragmatism that earlier led Bush to become ambassador to China in the mid-1970s, living in Beijing and endeavoring to widen the opening made by Richard Nixon in his controversial trip to China in 1972.

Last month both Bush and Ostrander attended a conference in China in which the bilingual edition of Ostrander's book was unveiled. The handsome hard-bound features photographs of Bush meeting with various Chinese leaders, including Chairman Mao, Deng Xiaoping and President Hu Jintao.

With the English text on the left and the Chinese translation on the right, the book, which sells for 48 Yuan (about $6), includes a new foreward "to the Chinese people" from the former president, a foreward to the Chinese edition from economist Li Yining of Peking University, a new foreward by Ostrander, a commentary on China-United States relations by translator Su Shijun of the Beijing Institute of Graphic Communication and Ostrander's recounting of the development of political pragmatism in the Chinese government. As far as I know, the book (ISBN 7-300-06919-3) is not distributed in the United States, but, for those who read Chinese, it is listed at http://sinobook.com.cn.

President Bush writes in his new foreward that "successful world leaders throughout history have learned through experience that they often have to make pragmatic, and often unpopular, decisions that will benefit their country in the long-term."

Ostrander writes that "during my (first) visit to China in 1979 I was impressed by how well the Chinese government and its leaders had provided adequate food and clothing for almost 1 billion people. ... Certainly this was an improvement over what most of the Chinese people had experienced before Mao. What all of this meant to me was that there is not one system or one way of thinking that will meet the needs of both countries and it is a mistake to judge the choices of one country by the standards of the other. The choices of a country's leader should not be judged by ideology but by their impact upon the quality of life their leadership provides for their people as well as the impact it has upon humankind."

For Ostrander the 1990 budget agreement represents visionary leadership and flexible attitude. "China's leaders too have demonstrated pragmatic leadership. ... China's annual per capita income has risen ... from over $1,000 in 1990 to $5,806 in 2004. As China's leaders have tried to reach their 'greater goal' things have not always been easy and will not always go well as this economic transition continues. A basic principle of leadership is for the leaders to have the courage of their convictions. China's leaders need to have faith in their vision and the direction in which they are moving the country."

If there is a hero in the evolution of Chinese communism it is Deng Xiaoping, who famous said, "it doesn't matter if it is a black cat or a white cat. As long as it can catch mice, it's a good cat." Ostrander writes that "Deng's pragmatism led to China's new economic policy of a 'socialist market economy with Chinese characteristics.' ... Deng in his December 1978 speech urged the CCP (Chinese Communist Party) to focus on development and modernization and let facts, not ideology, guide the country's development." Ostrander says that "Deng's pragmatic leadership and reform policies, 1979-1994, have brought about the biggest single improvement in human welfare in history."

In his book's introductory materials Ostrander offers an intriguing glimpse into geopolitical reality, into a world in which the "American century" may well give way to the "Chinese century."