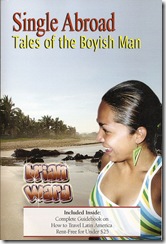 The last decade has been an eventful one for Chicoan Brian Ward. It began with his enrollment in the study abroad program at Chico State University (which took him to Queretaro, Mexico), and ends with the publication of "Single Abroad: Tales of the Boyish Man" ($18 in paperback from lulu.com). Well, not ends, really; he writes that "my dream is to open a hostel in Latin America or work as a travel writer." He's in no hurry to settle down.

Ward's account of living on the cheap in Europe and Latin America is self-deprecatingly funny. He is shy around girls and can hardly find the courage to pucker up when one of them leans forward "within kissing range." Yet he craves traveling to new places and meeting people (he stays at the Flying Pig Hostel in Amsterdam's Red Light District to meet his cousin, Simon, from the Canary Islands). He just has a difficult time with women people.

Ward is home for a time and will be signing books at Cafe Flo, 365 E. 6th St. in Chico on Tuesday, August 25 from 6:30 - 9:00 p.m. Those with wanderlust and a hankering for new-climes-on-a-dime are especially welcome.

For a while Ward worked at Club Med Ixtapa-Zihuatanejo in Southern Mexico. A quarter century ago Club Med was synonymous with the swinging lifestyle, but now it caters more to families. His Club Med interview is quintessentially Wardian. Each potential employee had to demonstrate a talent since Club Med staff are encouraged to mingle with the guests as "gracious organizers."

"My name was called," he writes, "and I walked up to the front of the conference room. I didn't know what to say so I stated that I had gone to Chico State; everyone started cheering and pounding on the desks. . . . The recruiter (Amy) was smiling at me the whole time and asked me what classes I had taken at Chico State. I admitted that during my last semester I had taken Tae Kwon Do, Softball, and Jujitsu. The whole room started laughing." So he did some martial arts rolls and explained he used them "whenever I was thrown off my bicycle in order to avoid breaking my back."

He got the job.