Chico poet pushes the boundaries of language and meaning 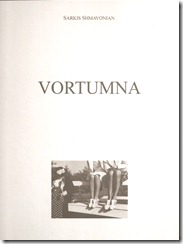 Sarkis Shmavonian, publicity materials tell us, "grew up on a small alfalfa and cotton farm outside Madera in a multilingual setting: Armenian at home, English in town, French, Latin, and German classes at school, a bit of kitchen Tuscan with friends. In college, during the tenure of a Fulbright Fellowship to the USSR, he came to appreciate the power of poetry to sway minds."

His first book of verse is "Vortumna" ($30 in hardcover from Erkir Press, Chico). Wikipedia says that "Vortumna" refers to the goddess Fortuna, "she who revolves the year," who reveals the fickle nature of reality. The poems reveal the fickle nature of meaning, especially in their mixtures of languages (anthropologists call it "intrasentential code switching"). In one of the notes at the end of the book, Shmavonian writes that "The subject of the words is their own inwardness: they eschew direct statement through syntax for a tremulous connotedness through grammar." If meaning here seems just beyond reach, perhaps that's part of the meaning.

The author will be talking about his work at Lyon Books in Chico on Tuesday, October 26 at 7:00 p.m.

Shmavonian's poems are set off in blocks of left- and right-justified text, and at first the reader has the impression of adherence to an overiding formalism. But the words themselves are unexpected, as if they aim to derail any attempt at gleaning some ordinary meaning. The poet writes in "Ex Sybillae" that "The task of syntax is / to foreclose thought." The difficult meanings, the use of a few vulgar terms, and the playful swirl of languages, form a strange mirror in which "the logic of the mirror is to hide its own forms."

In "Gateway Sculpture, CSU-Chico," the poet writes: "To you this is a bronze torch with its flame. / To me this clearly shows a sounding whale, / a die balanced en pointe between its flukes. / Bad of me: once beheld, who can unsee that?"
His verses, Shmavonian writes, "halt, or rustle awhile, or gesture fitfully from a still-blank space which cannot of itself sound its own depth. The words in their stir are already being rent into texts before the scope of the poem has brought them to full reckoning."