Paradise poet sees the folly of history, finds tenderness that touches the dead 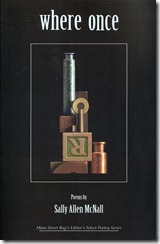 Sally Allen McNall's new book of poetry travels the world, encountering violence but also a measure of love. "Where Once" ($14 in paperback from Main Street Rag) is part of the publisher's "Editor's Select Poetry Series." Lyon Books in Chico is hosting a reading by the author on Tuesday, December 14 at 7:00 p.m.

In "Goodbye to Byzantium" the poet laments: "It is tender where I cannot go. / Baghdad, where once gardens. / A shore where once wild strawberries this small." There are "Concrete Particulars" to attend to: "Yes, but in this book of horrors you refuse, / this documentation of systematic, categorical death, / writer and reader must step back, if only a step, / or tenderness could not touch the dead, as it must." That word again: tenderness.

If tenderness cannot stop the "lively venom, vaccine / against hope," perhaps it can work its way into the "Hard Places": "I say on the phone I have given alms to Muslims and my friend says shut up shut up hangs up // e-mails me you could be accused of giving money to terrorists // You can't live the Berber's life, / he said, without some hard places forming in you."

The book's cover shows a detail of "Six Wooden Blocks" by G. Daniel Massad; "Six Wooden Blocks," the poet writes, "--named revenge, remorse / repentance, regret / remembrance, release // You might spend / a whole morning / stacking them / in one order / then another // . . . They are fashioned / of heartwood, / oiled, heavy, / never softening / to the touch."

But poets live, like Keats, Whitman. And Wordsworth. "You say goodbye to your unhappy childhood," the author writes to Wordsworth in "'Fallings From Us, Vanishings.'" "You learned how to love. And I say, forget / that it turned to fear and finally indifference, forget / that hope had to be relearned later and elsewhere, forget / your thousand poems to the members of other species. // There is anger everywhere in the world and sorrow / following. Even the Buddha would not tell you to forget / this, while you are busy remembering the bobolink, snow-cricket, brown bat, peony, honeysuckle."