True tales of flight from a Chico pilot 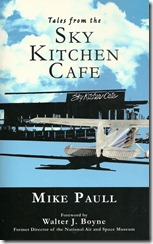 Mike Paull's interest in flying was piqued in 1978 and he's never looked back. Though a dentist in San Carlos, California, he also managed to log "3500 hours of flying time" as a private pilot and flight instructor.

Who better to get into the hearts and minds of the pilots who frequented the little eatery near the San Carlos Airport? A dozen of their stories are brought to life in "Tales from the Sky Kitchen Cafe" ($14.95 in paperback from Skyhawk Publishing).

Paull, retired and living in Chico with his wife, Bev, will be talking about his work at Lyon Books in Chico, Wednesday, May 11, at 7:00 p.m.

Many of the stories are (need I say it about flying?) uplifting. Paull tells how two pilots, Jeanne and Fran, developed the "Fear of Flying Clinic." Then there's "Crazy Dave," a test pilot and racer. "Dave has competed in more races (216) than anyone in the history Reno Air Racing."

One of the Sky Kitchen denizens was a pilot named Herb. The conversation around the counter would frequently move to flying mistakes, and Herb would say that "there are old pilots and there are bold pilots, but there are no old bold pilots ... The difference between a big airplane and a little one, is that the little one will kill you just a little."

The emotional heart of the book, though, is the story of Phil and Hap. On March 10, 1945, "Phil's B29, Sentimental Journey, had just dropped the first bombs that would lead to the largest fire ever known to man. Over 100,000 people would burn to death in the next twenty-four hours. ... As his fellow B29 crews flew overhead just 5000 feet above him, an American B29 navigator huddled in his cell, terrified he would die that night in a Japanese prison camp. The navigator, Hap, survived that night, survived the war and fifty years later wandered into the Sky Kitchen for lunch. He sat at the center counter and coincidentally sat next to a guy named Phil, the Pathfinder of the March 10th raid over Tokyo."

The war left terrible scars, but both men would later return to Japan--a testimony to the courageous fellowship at the Sky Kitchen Cafe.