A change-of-pace novel from Doug Keister 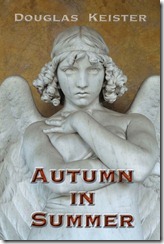 "Somebody's gotta pay for this." Those were the words from the Berkeley mayor as he confronted two Cal Bears quarterbacks in the coach's office. First stringer "Dapper Dan" Daniels and second stringer Percival (Percy) Peabody had cavorted with the mayor's twin daughters who said they were 18. Only they weren't quite. The twins were not quite virginal, either, but since the mayor had the concession license for the games, Daniels stayed but Peabody was shipped off to a firefighting crew in Winnemucca, Nevada. But instead of the larger-than-life shenanigans as in Doug Keister's first novel, "Desiree," something different is about to happen to Percy. Her name is Autumn.

"Autumn in Summer" ($12.99 in paperback from CreateSpace; also in e-book format for Amazon's Kindle) marks new territory for Chicoan Doug Keister as he explores the inner landscape of love, loss and identity and wraps it all in a family mystery in which a cemetery plays a prominent role. The story is well plotted.

That waitress in the Winnemucca bar. "'They call me Autumn,' she said, running her fingers through her red hair and inspecting it, showing off a bit. She cocked her head and smiled that big smile." Percy (well, here he goes by "Pete") is smitten. And then there's Autumn's strange tattoo, a code, a reminder of a puzzle left by her grandmother.

Then Pete is called away to fire duty. He returns a hero, but Autumn has vanished. The search is fruitless--perhaps Autumn doesn't want to be found--and eventually Percy returns to the Bay Area. Autumn is a dream but life moves on. Percy marries Dapper Dan's sister, Barbie.

The marriage drifts. One summer Percy is dragged by his wife to Italy for a summer course on classical sculpture and a visit to Verano Cemetery. "On a slight rise near the edge of the cemetery grounds, I stopped dead in my tracks. Tucked into a small outdoor gallery was a sensual white marble angel. It was Autumn. Autumn with wings and curls. Autumn as an angel."

Something re-ignites in Percy, and the reader follows the twists and turns of a heart wracked by guilt, determined to know: Is Autumn still out there? Has she left word? What is the price to pay for love?