Helping students, but not without controversy 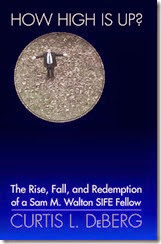 Former Chico State University President Manuel Esteban characterizes business professor Curt DeBerg as “a nonconformist, irrepressible, blunt, and undeterred by bureaucratic hurdles.” Those qualities are very much in evidence in Professor DeBerg’s detailed account, “How High Is Up? The Rise, Fall, and Redemption Of A Sam M. Walton SIFE Fellow” ($24.95 in paperback from Memoir Books; also for Amazon Kindle).

Esteban encouraged Professor DeBerg’s efforts establishing a chapter of Students In Free Enterprise (SIFE) on the Chico State campus. SIFE, writes DeBerg, is “one of Wal-Mart’s favorite nonprofit organizations,” a way for the corporation and its business sponsors to help college students practice free enterprise in their local communities, and also a way to train a future generation of leaders.

DeBerg advocated “service learning” which emphasized community support projects. That seemed a good fit with SIFE, and so DeBerg became a Sam Walton Fellow, named after the legendary founder of Wal-Mart.

His book details his adventures during his dozen or so years as a SIFE leader (Chico State teams became national champions and a force to be reckoned with), but DeBerg grew increasingly at odds with the organization, wanting it to be more accountable (the Fellows had little say), less Christian (and more inclusive) and less politically right-wing. As DeBerg explored his idea of SIFE teams helping less privileged high school students become entrepreneurs, there was a clash of goals, and egos, and he was kicked out.

Yet what DeBerg learned in SIFE helped him start Students for the Advancement of Global Entrepreneurship (SAGE), focusing on high schools. SIFE itself changed its name to “Enactus” and instituted some of the reforms DeBerg advocated. It’s a tangled tale, more “prickly” than this review would suggest, but ultimately a vision for what DeBerg calls “humanitarian capitalism.”