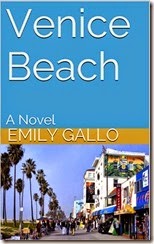 In the acknowledgements to her just-published novel, Chicoan Emily Gallo makes special mention of Tin Roof Bakery and Cafe, “where I spent many hours writing over endless cups of Earl Grey.”

Her protagonist, Finn (Finnegan) McGee, who “arrived in New York at age eighteen after a dirt-poor, miserable childhood in Ireland and never went back,” favors whiskey rather than tea. McGee became a best-selling writer but now his best-selling days seem long past. After the death of his second wife, McGee, penniless and often drunk, heads to Los Angeles to stay with his daughter Kate, “an attractive, athletic, forty-two year old with a short pixie haircut, slightly built and spry like her father.”

Kate lives in a town where everybody walks, a place that’s a magnet to the homeless of every description. “Venice Beach” ($14.95 in paperback from CreateSpace Independent Publishing Platform; also for Amazon Kindle) ushers the reader into the sights and sounds of the famous boardwalk.

“There were singers and dancers doing everything from reggae to hip-hop to eye-popping break dancing. A muscular man wearing a bright royal blue speedo whizzed past on rollerblades followed by a man adorned with twigs and leaves walking on stilts. There were acrobats walking across tightropes and jumping over a line of six or seven people touching their toes. A man did a twenty-minute interactive show walking barefoot on broken glass as professional as any you’d see in Las Vegas.”

As Finn sinks further into booze and pills, he befriends some of the boardwalk oddballs, like Bella, a hoarder and Holocaust survivor, and Jed, a mysterious man with a cat named Mother whose past becomes both Finn’s liberation and maybe his demise.

The novel is compulsively readable and more is promised from Gallo’s talented pen.

The author will be reading and signing copies of her book at Lyon Books in Chico on Thursday, March 12 at 7:00 p.m. She will be the featured guest on Nancy’s Bookshelf, with Nancy Wiegman, March 13 at 10:00 a.m on Northstate Public Radio, KCHO, 91.7 FM, or streaming at mynspr.org.