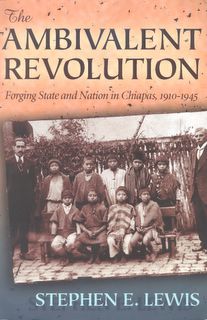 Stephen E. Lewis, a member of the Chico State University history faculty, will speak Friday afternoon about his new book on the Mexican state of Chiapas, beset by poverty and ethnic unrest and, since 1994 (when Mexico became part of the North American Free Trade Agreement) the Zapatista rebellion.

Lewis' talk is scheduled for 3 p.m. in Trinity Hall on the university campus.

Lewis' book is "The Ambivalent Revolution: Forging State and Nation in Chiapas, 1910-1945" ($24.95 in paperback from the University of New Mexico Press), and it attempts to answer a question few historians have explored: "Why did Mexico's most significant rebellion in decades take root and grow in indigenous Chiapas?" The answer, he affirms, lies in the little-explored history of Chiapas in postrevolutionary Mexico (from 1910 onward). Chiapan archives have been neglected, he writes, but once the story is pieced together what emerges is a vastly complex interaction between Chiapas and Mexico, and, within Chiapas, among the ladino (non-Indian) population and their attempts to exploit the highland Indians -- the Tzotzil and Tzeltal Maya.

In order to make sense of the story, Lewis focuses his research on the ever-changing role of "the federal government's most important state- and nation-building institution ... the Ministry of Public Education (SEP), created in 1921." As the author reports, "The SEP and its teachers tried to modernize and 'nationalize' Chiapas and introduce important federal reforms against a backdrop of grinding rural poverty, inadequate infrastructure, a fiercely independent rancher and planter class, and an ethnically diverse population that vacillated between indifference and open hostility."

Though at times influential, the SEP's "radical pedagogy" ultimately remained powerless to transform Chiapas into an extension of whatever Mexican government happened to be in place at the time. Advocates of centralized government, Mexican presidents tended to have little lasting influence there.

SEP-sponsored nationalism, Lewis writes, tried to use the Emiliano Zapata legacy to its own ends. He appeared in SEP texts in the 1930s "stripped of his drinking, his gambling, his womanizing" and was portrayed, as one historian put it, as "an immaculate symbol of the emancipation of the rural masses." Years later, however, the government itself would be challenged by those claiming loyalty to that very vision.

Lewis writes that "the SEP's nation-building campaign in the 1930s involved an ambitious, quixotic attempt to forge the hearts, minds and bodies of the new Mexican. It first attacked the foundations of Mexico's 'traditional' culture based on Catholicism and rural paternalism. In its place the SEP fought to create a modern, secular, sober culture that emphasized civil and national duty. Teachers and the school were to replace the priest and the church, and an interventionist federal government was to replace the patron (boss)." There were mixed results in Chiapas, though Lewis notes that this "cultural nationalism" did help those in rural areas imagine what it might be like to be part of the larger Mexican state.

Even the progressive Lazaro Cardenas, who instituted land reform in Chiapas in 1939 with the help of the federal teachers, who were engaged in agrarian reform and worker unionization, found that "the institutions of the Mexican revolution that preserved the social and political peace elsewhere in the country either did not have the opportunity to develop in Chiapas or were so thoroughly corrupted that they exacerbated problems instead of solving them. After 1940," Lewis writes, "the state that had been part of Guatemala until 1822 would follow a distinctly Central American pattern of political, economic, and social development, culminating in guerrilla insurgency."

The Zapatistas of the 1990s came about, Lewis concludes, because "the grievances that produced the insurrection" (especially issues of land control, not unique to Chiapas) could not be addressed by failing and corrupt local governmental institutions. "Schooling in the highlands remained ineffective and culturally insensitive"; settlers in other areas had none at all. But because the Mexican state had adopted "neoliberal economic policies" and abandoned "revolutionary nationalism," the rebels in Chiapas adopted the earlier socialist vision of the SEP schools and "not only upset the political order in Chiapas and Mexico and grabbed international headlines, but ... forced Mexican society to conceptualize a multiethnic nation."

But, Lewis adds, even the Zapatistas likely will be "unable to reverse centuries of marginalization, exploitation, institutionalized racism and scarcity in Chiapas."