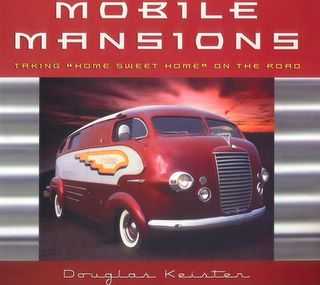 "RVers are some of the friendliest people on earth," writes Doug Keister in his new pop culture history, "Mobile Mansions: Taking 'Home Sweet Home' On the Road" ($24.95 in large size paperback from Gibbs Smith, Publisher). "Unlike the rest of us who are permanently or temporarily moored in our bolted-down communities, they take the bumps in the road of life a little more serenely." And none are friendlier than those who own vintage and classic RVs, the mobile conveyances celebrated in Keister's book.

Replete with 200 color photographs, most taken by Keister himself on location, the book explores not only the history of the recreational vehicle but allows the reader to see inside courtesy of the author's crisp, clear interior shots. From Camp Dearborn, Mich., to Quartzsite, Ariz. (with a quick stop in Chico), Keister documents the development of what used to be called "autocamping."

Autocamping was popularized by Henry Ford, Thomas Edison and Harvey Firestone (of tire fame), along with an unlikely companion, a naturalist named John Burroughs. After about 1915 the group called themselves "the Vagabonds," attracting newspaper attention everywhere they went. The group was not exactly rustic -- Firestone brought his butler along to help him better appreciate "roughing it."

Later on, the "Tin Can Tourists" organization was established in 1919; they "took their name from the tin can provisions that they subsisted on and, some say, also from the Tin Lizzies many of them drove."

The Great Depression and better roadways put Americans on the road. It was the golden age of the travel trailer. Subsequent decades saw the development of house cars, refined camp cars, family buses, truck campers, vans and motor homes (which had their start with the Frank Motor Home in 1958 which morphed into the Travco Motor Home in 1965.) There are other storied names in the book: Volkswagen, Winnebago, Newell, Barth, Flexible.

Keister devotes a chapter to each kind of "mobile mansion" with a focus on "personal visions" in the last chapter. Pride of place here goes to "Draco," a four-wheel-drive motorhome created by Shahn Torontow of Victoria, British Columbia, who constructed it so his photographer wife, disabled by Lyme disease, "could still go on backcountry photographic expeditions. The bones of Draco are an Oshkosh M-1000 Aircraft Rescue Fire Truck." There's also a wheelchair lift, 14-inch wide tires, a winch and "a 335-horsepower Caterpillar 3406A diesel-pusher engine." The contraption was photographed in Chico. Dishes have magnets glued to their bottoms so they "stick" on steel plate walls and a "macerator-type toilet liquifies waste ... (which) can be pumped into the exhaust system where it is vaporized at over 1,000 degrees Fahrenheit."