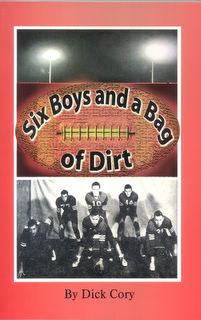 "I've ... seen the full blown effects of tornadoes up close and personal," writes former Bidwell Junior High science teacher Dick Cory. "Working for a farmer while in high school, I had the unenviable job of untangling barbed wire fencing and returning it to concrete posts -- all uprooted and entangled by a twister."

Weather played a part in his growing up, of course, but so did six-man football (there were not enough kids at his school for a regulation team), pranks (snipe-hunting), learning to drive a farm tractor, pranks (stealing watermelons), watching a pig being butchered, pranks (something about used tires) and hanging out at Cory's store in Alexandria, Neb. The town, located "in the southeastern corner of the state about 15 miles from Kansas," had a population of about 200. Cory, born in 1936, spent the 1940s and 1950s in Alexandria before beginning a 36-year classroom career, most of it at Bidwell Junior High in Chico.

His memories of quieter times are compiled in 74 short chapters self-published as "Six Boys and a Bag of Dirt" ($20 in paperback from the author at ubangarang@sbcglobal.net). A couple of dozen black and white photographs enhance the tales, which are mostly reminiscences of boyhood chums and the big world beyond Alexandria. Cory lost track of most of the town's denizens but began to write about his experiences in preparation for his 50-year high school reunion in 2004.

The town that year still had pretty much the same population, but had "slumped." "When we left in 1954, there were two grocery stores, two filling stations, a hardware store, two barbershops, ... a pool hall, a post office, a television repair shop, a bank and a 12-grade school. Now all that remains is a hardware store and a grocery/general store plus the post office." What keeps people around? "Not much, unless it is the cheap and slow pace of living. Welfare recipients and retirees find Alexandria comfortable if not too stimulating. Have we been too 'stimulated' by the lifestyles that we enjoy to ever live again in 'Big A'?"

Ah, but growing up in "The Big A" -- that was wonderful. "At my parents' store, there were plenty of distinctive odors. ... My favorite location on open nights was around the meat counter. There was always a coffee pot with saltine crackers, Pream and of course fresh strings of wieners, salami and liverwurst. A sip from the vinegar barrel in the cellar was also quite satisfying. ... Between snacks, I was supposed to wait on customers, slice lunch meat or grind hamburger. These activities kept me going until eleven o'clock, when the farmers returned from the pool hall to pick up their wives, kids and egg cases that now were filled with groceries. If business was really slow, I could go to the middle storeroom and sleep on the stacks of overalls -- which also had a distinctive aroma. ... Life was good in the Midwest."

A lot of water has gone over Big Sandy Creek since then. But the irrepressible author was not above a prank or two in later life. Like the discovery of the skull of the rare Ubangarang "found in a pile of driftwood on a northern California beach in 1972" when Cory "was teaching backpacking with a Chico Unified summer class called Outdoor Living."

Soon the Ubangarang Preservation Society had been formed. Can life as a talking head on CNN be far behind?