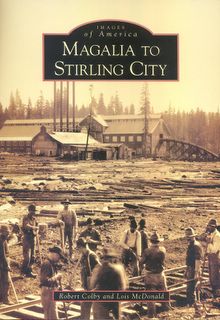 Bob Colby is editor of Tales of the Paradise Ridge and co-author, with Lois McDonald, of the just-published "Magalia To Stirling City" ($19.99 in paperback from Arcadia Publishing).

In a telephone interview he expressed his admiration for McDonald, the premiere Ridge historian and former longtime editor of Tales, and his sadness at her passing.

McDonald died earlier this month at the age of 85, just as the book was being released. Her legacy includes "This Paradise We Call Home" and "Annie Bidwell: An Intimate History," a wonderful biography which deserved all the acclaim (and there was much) that came to its author.

In publicity materials for "Magalia To Stirling City," Colby says this "history through photographs" (gathered from back issues of Tales and from private collections, some never before published) is the ideal book to give to someone who wants to know the story of the upper Ridge.

With more than 200 black and white photographs - beautifully reproduced - the book (as Colby puts it) "pulls together ... information on the Butte County Railroad, the Gold Rush town of Magalia (Dogtown), Diamond Match logging operations, the mill town, Stirling City, and Ridge ghost towns."

The book is part of Arcadia Publishing's "Images of America" series. According to a news release, "Arcadia - founded in 1993 - become the largest publisher of regional history books in North America."

Each of the seven chapters of "Magalia To Stirling City" begins with a brief narrative and is followed by historic photographs (mostly from the first half of the 20th century), with detailed captions that add to the reader's appreciation. For example, the chapter on the Diamond Match Co. notes that it bought "over 69,000 acres of timber in Butte, Plumas and Tehama counties" (containing over two billion board feet) in 1901 and completed a sawmill in Stirling City (named after the Stirling Consolidated steam boilers that powered the plant) two years later. Logging began on nearby Bald Mountain in 1904 and a rare photograph shows "four Big Wheel log haulers, called 'Katydids'" pulled by horses. Diamond set up camps using "bunkhouses on skids" which were loaded onto railroad flatcars and a picture, from 1915, says that "logging camp buildings were moved this way ... well into the 1930s."

There's a 1906 picture "taken at the intersection of Laurel and Granite streets" in Stirling City, complete with a wagon drawn by four horses. In the background a sign advertises Simmens and Suggett's Clothing Store and their line of Can't Bust 'Em work clothes.

In Magalia it was mining. "The first gold seekers came in 1849 up the canyon of the west branch of the Feather River, or they followed Butte Creek and its several branches. Climbing up from the canyons, they came together in a small saddle between the streams. Here a tented trading post was erected by one man as an easier way to make money - taking it from the hungry, ill-clad miners rather than from the cold wet streams. Flour, sugar, coffee, and tobacco were hauled by mules and wagons from Marysville or farther. A sawmill or two followed. Saloons appeared, and so did more stores. ... Few women came in the early 1850s, but one miner's wife, who had insisted on coming herself and bringing a dog or two on the trip across the plains from Iowa, did not miss the glint of joy in the eye of every lonesome miner who spotted her mongrel puppies cavorting among the tent houses. Sales were brisk for Susan Bassett. As the reputation of the town grew, the name Dogtown naturally came to the miners' lips, and the name of the town was set."

No doubt Bassett was hounded. You just can't make up stories like this.

For me, the emotional center of the book was the chapter on "ghost towns and memories." Here are Nimshew, Hupp (a mill there "supplied the lumber from which the first houses in Chico were built"), Coutolenc-Lovelock, Toadtown (originally called "Towtown," say the authors, for a family's blond-headed children), Powellton, Inskip, Philbrook, and the landmark Chaparral House (constructed in 1857 "as a hotel and way station on the Oroville-Susanville Road" just up the road from Inskip).

"Magalia To Stirling City" is an evocative journey and an indispensable guide to local history.

Thank you for taking the time to comment on this book. I live on the island of Maui in the Hawaiian islands now (these have history of their own!) but grew up for 22 years in the Stirling City/upper ridge area. I am glad to see quality publications such as these, and look forward to reading the book! -S.T.M.