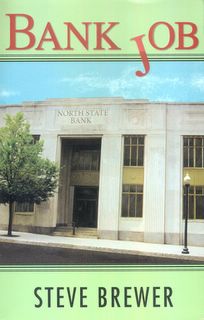 Vince Doman was a serial bank robber. Eventually caught, he did his time in Soledad but couldn't stand his parole officer. So he disappeared with his wife, Maria, a prison nurse he had met while in the stir. Vince, now 72, settles down to a life of retirement near Old Shasta, not far from Redding.

He promised Maria he would go straight. And, writes Redding novelist Steve Brewer in "Bank Job" ($24 in hardcover from Intrigue Press), "he'd stuck to his word for more than 5 years now. Never so much as a parking ticket. But the system never forgot. ... Vince Doman had violated his parole, which meant he was supposed to go back to prison for the rest of his original sentence. Fifteen more years, which would be a life sentence for a man his age. Vince would do anything to prevent that."

Enter a trio of ne'er-do-wells, Leon Daggett and his brother Junior, and Roy Wade, a violent time-bomb of a man who, we're told, "was terminally stupid, but he projected absolute certainty about absolutely everything." They were on a crime spree, "roaring around rural California in Leon's sleek black car, knocking over gas stations and convenience stories for small change. Swilling Buds and smoking Marlboros and whistling at passing women." As Junior observes, "it was like a typical redneck Saturday night in Bakersfield."

Zooming north in his Trans Am to unfamiliar territory, Leon and company decide to make a beer run at Shasta Liquors. And why pay when you can send in Junior, the shaky-legged amateur, for some easy pickin's? But Junior didn't figure on the owners, the Bingham sisters, who brain Junior with a fifth of whiskey when he bobbles his stick-up announcement in a hilarious but unprintable spoonerism.

Managing to escape, Junior and the other two hightail it up the road between Old Shasta and Redding, and, as luck would have it, pull into a certain driveway and take the old couple there hostage. Maria volunteers (at gunpoint) to pick the glass out of Junior's head and bandage him up. Vince, meantime, sizes up the intruders, Roy especially. "The sides and back of his head were shaved and tanned. The dark strip of hair on top was short and slicked straight back. The hairstyle was like a billboard saying, 'Moron.' But Vince recognized something in the hard glitter of the man's eyes and amended the assessment: 'Dangerous moron'."

Hoping to get some traction, Vince brags about his past, laying it on pretty thick. The trio's little brains begin to formulate a plan for the big time -- meaning banks instead of liquor stores. And guess who, under threat Maria's death, gets to do the dirty work? And guess who still has his bank robbing equipment stowed away?

Meantime, Shasta County Sheriff's Deputy Debra Kemp tends to Shasta Liquors. She finds the Bingham sisters a handful (they play the tape of Junior over and over and talk of stardom) and dreams of how she can make a name for herself and get promoted to detective. She tries to track down the getaway vehicle and, relying on instinct and a few clues (like blood all over the walkway from Junior's wound), rolls into Vince and Maria's driveway. Oh, oh: What's a reformed bank robber who is about to do it again to do? Kemp gets a cock-and-bull story from the kindly couple and Kemp leaves almost satisfied. But not quite.

Brewer puts the plot into motion and 50 short chapters and a truckload of expletives later the book comes to a satisfying conclusion. "Bank Job" (it might have been called "Nose Job" given what happens to the trio) is a made-for-TV shoot-'em-up with the north state an integral backdrop. As Kemp wonders where the injured liquor store crook might have landed, she muses: "No place to hide in the village of Shasta. More a tourist stop for history buffs than a real town, it was called 'Old Shasta' by the locals to distinguish it from all the other Shastas in the area -- Lake Shasta, Shasta Dam, Shasta County, Shasta College, Shasta Lake City, the village of Mount Shasta and the daddy of 'em all, Mount Shasta itself, a snow-covered, 14,000-foot peak, which on clear days floated above the northern mountains like an iceberg."