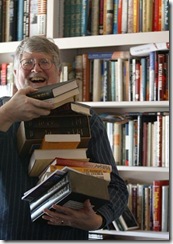 This column began back on March 4, 1987 and celebrated two decades of weekly reviews this year. We were graced with an Annie award as well, for which we are grateful. Most gratifying, of course, are the notes over the years that have indicated the column has been of some small service in bringing readers and authors together.

In the history and memoir department, this year’s featured works included “Too Many Irons in the Fire: The Life and Times of Charles F. Stover and the History of the Ranching Families of Tehama, Lassen and Plumas Counties, 1850-2006” (Cheryl Conard Haase); “You Too Could Go to Federal Prison!” (Dorothy J. Parker); “Wooden Ships and Iron Men: The U.S. Navy’s Ocean Minesweepers, 1953-1994” (David D. Bruhn); “After the Dust Has Settled” (Dick Cory); “Towns of Mount Lassen” (William Shelton); “The House at 5th and Salem” (Chico’s Stansbury home) by Frederick S. Clough; and “85 Years – Durham High School” (Adriana Farley).

There were inspirational works, too: “Foolsgold: Making Something From Nothing and Freeing Your Creative Process” by Susan Wooldridge (a hardcover selection of the Quality Paperback Book Club); “Power Stories: Everyday Women Creating Extraordinary Lives” edited by Cara Gubbins; “The Seven Principles of Golf: Mastering the Mental Game On and Off the Golf Course” by Darrin Gee; and “Becoming the Kind Father: A Son’s Journey” by Calvin Sandborn.

For young people: “Grand Canyon: Tale of the Scorpion (Adventures with the Parkers series)” by Mike Graf; “The Legend of Boomer Jack” by Tim Martin; and “Gracie’s Big Adventure With the Misfits” by Debbie Cobb.

This year also saw reviews of the Convergence Web magazine (www.convergence-journal.com) co-edited by Lara Gularte; and the humorous picture book “Animals Thinking Out Loud” by Mike and Nancy Agliolo.

It was a good year.

Posted by Dan Barnett at 8:01 PM No comments:

The Christmas story made new: fresh words from a pastor’s heart 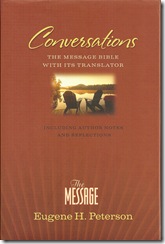 Eugene H. Peterson, seminary teacher and Presbyterian pastor, spent a decade working from Greek and Hebrew texts to produce the Message, a Bible paraphrase in contemporary English. Long an advocate of what he calls “spiritual theology,” Peterson has taken excerpts from his sermons and devotional writings, added them in appropriate places in the Message, and published the result as “Conversations: The Message Bible with Its Translator” ($39.99 in hardcover from Navpress).

The conversations, he writes, “are more casual than formal. . . . We’ll travel a lot of terrain together, some of it breathtakingly scenic, some of its ploddingly plain, and some of it precariously uncertain. Here and there along the way I’ll point out details in the biblical landscape, drawing attention to a particular word, pointing out a pertinent piece of historical background, pausing a moment to talk with you and to lead you in prayer.” This is not a study Bible, though; it is a reading Bible, and Peterson’s turns of phrase can sometimes be sharp and startling. Familiar passages are made fresh and shake the reader awake.

Mary’s Magnificat in Luke’s Christmas story is street-wise: “I’m bursting with God-news; I’m dancing the song of my Savior God. God took one good look at me, and look what happened—I’m the most fortunate woman on earth! . . . His mercy flows in wave and after wave on those who are in awe before him. . . . The starving poor sat down to a banquet; the callous rich were left out in the cold.”

Two thousand years ago, “there were sheepherders camping in the neighborhood.” The second chapter of Luke’s gospel goes on to say, in Peterson’s paraphrase, “Suddenly, God’s angel stood among them and God’s glory blazed around them. They were terrified. The angel said, ‘Don’t be afraid. I’m here to announce a great and joyful event that is meant for everybody, worldwide: A Savior has just been born in David’s town, a Savior who is Messiah and Master. . . .’”

Posted by Dan Barnett at 7:56 PM No comments: 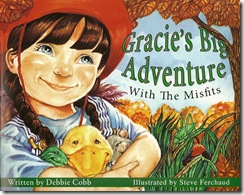 If Debbie Cobb is best known as the weekend anchor for Channels 12 and 24, she’s making a new name for herself among young readers. First came “Gracie’s Big Adventure With Augustine the Beaver,” published in 2006, and now, this year, “Gracie’s Big Adventure With the Misfits” ($10.95 in paperback from Laurob Press). Both books are available locally at Barnes and Noble, Bird in Hand, the A.S. Bookstore at Chico State University, Made In Chico, The Creative Apple, and Lyon Books. For online information about the books readers can go to dcobbconsulting.com.

The author will be signing copies at the Redding Library on Saturday from 10:00 a.m. until noon and at Lyon Books in downtown Chico this Sunday from noon until 1:30 p.m. The public is invited for a kid-friendly presentation.

The full-color, full-page illustrations by Steve Ferchaud for “The Misfits” are particularly vibrant. They draw the reader into the fun, and young Gracie’s wide smile is not a little reminiscent of Cobb’s own.

Who are the misfits? There are three: Freeman the duck doesn’t like water; Alan the mouse is missing a tail (thanks to a crafty cat); and Tony the turtle has lost his shell. Gracie adopts them all and writes up a fix-it list. It turns out that Tony the turtle really likes water, and Gracie turns on the sprinkler. “It wasn’t long before Alan scurried across the lawn and got all wet, too. Then, to everyone’s surprise, Freeman took one bold step forward, then another and another. This duck no longer had a fear of water.”

Spurred on, Gracie decides to look for Tony’s shell and eventually finds it after a long search. “Gracie had almost completed her mission. She had one more thing on her list to fix.” Where to get Alan a tail? Could Grammy sew one on? Could one be glued on?

But then Gracie realizes something. Though Alan had no tail, “Gracie loved him just the same.” The moral of the book, Cobb writes me, is “about accepting others despite their differences and knowing even if you are different, you’re still loved.”

Cobb’s first book had hidden “G’s” (for Gracie) in each illustration; in “Misfits” there are hidden M’s. And, she writes me, “There’s also a park scene where the bench says ‘Bidwell Park’ with a cat in the scene. It’s total Chico for the locals.” (Just a hint: in that picture, the M is in the tree!)

It’s an old fashioned story with a moral, a simple tale with resonances in the wider world.

Posted by Dan Barnett at 8:24 PM No comments:

From McKinleyville author: A “love-‘em-and-leave-‘em” story for rednecks 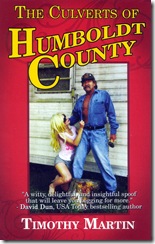 Retired engineer Timothy Martin has written books about running and dogs, but “The Culverts of Humboldt County” ($16.95 in paperback from PublishAmerica, available through amazon.com), is something else entirely. It’s a politically incorrect “romance for men” that wallows in redneck culture even as it’s being satirized. It’s “The Bridges of Madison County” for those with an “affinity for fried food, the NRA, John Deere tractors, ruined vehicles, and anything that explodes in a really, really big way.”

The story is pretty simple (presumably out of respect for its readers). Told to the author by one Ruby Harmon, now of Redding, the tale takes place in 1982. Earl Perkins of Ukiah is “the last of a dying breed, a hard-drinking, pickup-driving man at the end of an era, confused by a time of dwindling timber resources and the fading dignity of sweat and physical toil.” He’s a culvert repairman who leaves his plus-size wife after having “cheated on Elvira no less than a hundred times during their marriage.” But, “being the kind-hearted soul that he was, Earl left Elvira almost everything he owned. He left his matched set of World Wrestling Federation beer coolers, his eight track Marty Robbins tapes and his velvet Elvis painting. . . . Earl took his K-Mart tools, a quart or two of whiskey, and nothing more.” Generous.

Eventually on his travels he encounters Charlene Bickle, also unhappily married, “a tall, good-looking, long-legged woman with a tiny naked Smurf tattooed between her breasts who subsisted on tobacco smoke and beer.” They eventually wind up dirty dancing at the Nasty Place, a bar that is “dimly lit and decorated in typical white trash fashion with bowling trophies and posters of girls in tight jeans, bending over,” and, when the inevitable brawl breaks out, they escape only to find ecstasy in each other’s arms. Then comes a chapter called “A Bounce on the Bedsprings,” if you get what I mean.

Martin is clear that “this is not a tale of love and confession among the rich and unethical. . . . This book is a tacky testimonial to bad hangovers, cigarette burns, and anyone who can belch and say their name at the same time.” It’s also “not for the faint of heart. . . . It’s a reader’s equivalent of a steel splinter from a flywheel striking you in the face. . . . It’s a skinned knee, a nosebleed, and a concussion from a car slipping off the jack and landing on your head.”

So why did I laugh out loud?

Posted by Dan Barnett at 8:20 PM No comments: