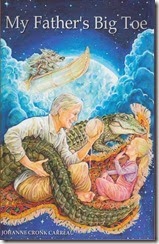 “Our first move was from Quebec to California,” writes Paradise author Johanne Cronk Carreau. “We were a French-Canadian version of ‘The Beverly Hillbillies.’ Father was the only one who knew how to drive or how to speak English.” The stories told by Gilbert Carreau “wrapped around us like strong threads in an indestructible fabric ... a bond that outlasted his life.”

Five stories are told in “My Father’s Big Toe” ($12.95 in paperback from JoJo Books; available from myfathersbigtoe.com or from Lyon Books in Chico, where Carreau was a recent guest). Steve Ferchaud provided the interior illustrations as well as the cover, which features elements of each of the stories.

The title tale introduces the fearsome Loup-Garou, “a mean and hairy beast with the body of a wolf and the face of a man.” He flies through the sky in a magic canoe. And if you saw him, a body part would catch on fire. Is that while Gilbert’s big toe lacked a toenail?

In “Alligator Dance,” Carreau’s father has to fight off a pesky alligator so he can fix a sick tree in the Florida everglades. In the 70s Gilbert worked for a while as an electrician in Zaire, and brought back the story of “Pygmy Stew.” Bottom line: “I didn’t get cooked.”

“A Ball Of String” is about a boy Gilbert grew up with who got a strange present for his ninth birthday. Gilbert’s friend was in a hurry to grow up, and pulling on the string made time go forward. Dream or no, there’s a moral in there somewhere.

In “The Magic Carpet” Carreau writes: “Father gestured a royal invitation with a sweep of his open hand. He bent forward with one arm folded at his waist and the other at his back. ‘Welcome,’ he greeted us in a magician’s tone. ‘Step right up and experience an astonishing and miraculous adventure. Take a seat, take a chance, and take a journey.’ He raised his arms and in a wave unrolled an invisible magic carpet. My sister and I sat as his feet, our shoulders bouncing with giggles.”

A novel from George Keithley 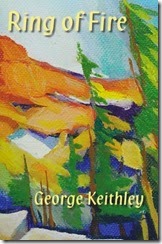 “Ring Of Fire” ($19.95 in paperback from Plain View Press) begins with a bang--the eruption of Mt. St. Helens--and carries the reader into the life of a family that is set to explode as well. Chicoan George Keithley, renowned for his poetry, brings a sharp sensitivity to the human condition in the story of Dr. Robert Pell, a volcano expert.

Pell is working with Dick Darwin of the National Emergency Planning Agency, whom Darwin wants to become the voice of authority in case other volcanoes threaten to blow. Too many lives gone at Mt. St. Helens caused by haphazard responses from state and local agencies. Dick is out to change that.

Pell is headquartered near Lassen Peak and Darwin is immediately smitten with his daughter, Linda, who, like Dick, is in her twenties. Eventually they live together for a while in the Bay Area, but there’s a parting amidst confusion about the nature of love.

Dr. Pell’s wife, Annette, is addicted to cocaine and her dealer, A.J., a courteous young man, takes a liking to Linda. For reasons revealed in the novel, Dr. Pell cannot abide A.J. “But while Doctor Pell had traveled the Pacific Rim,” Dick says at one point, “lecturing on its volcanic hazards, his wife had remained at home where she understood, if anyone did, that the family too is a ring of fire.”

That includes Pell’s brother, Father Ted, a misplaced Catholic Priest taken with the writings of an old pioneer who sanctioned the killing of Ishi’s people and then spent a lifetime repenting. “The fire that burns us with our guilt is the fire of love, isn’t it?” Father Ted tells his congregation. “Only if we care for each other can we know our guilt, feel shame, and hope to be forgiven.”

The tragedies that bring the story to an end offer hope, but muted. Keithley has written a deeply insightful account of painful love that will not soon be forgotten. 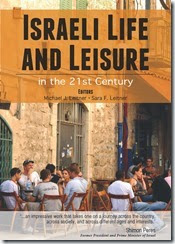 Michael Leitner teaches in the Department of Recreation, Hospitality, and Parks Management at Chico State University; Sara Leitner teaches in the Department of Kinesiology. Together the couple has made extensive study of leisure--free time--with a special emphasis on Israel. And now they've produced a remarkable book exploring "Israeli Life and Leisure In The 21st Century" ($40 in paperback from Sagamore Publishing; also available in ebook format at sagamorepub.com).

The book is a collection of reports from a wide variety of scholars as well as those involved in leisure movements in Israel today. The 55 chapters focus on aspects of Israeli life outsiders may know little about, from folk dance to chess, weddings to wine tourism.

Eight chapters deal with "recreation programs for promoting peace in Israel," such as ice hockey and Friendship Games. Nine chapters present facets of leisure diversity in Israel, including "leisure culture in Arab society in Israel"; life of the Ultra-Orthodox; recreation for those with special needs; and "calculating hedonism among Israeli gay men."

The Leitners contribute several chapters, and note in the introduction that though Israel is "one of the safest places in the world to visit," "because of the unique security threats that Israel faces, military service is mandatory for Jews. Males serve for 3 years after high school and women serve for 2 years." An epilogue discusses "Israeli Leisure and Life Under Rocket Fire," and Michael Leitner writes that he and Sara were living in Tel Aviv in July 2014 when war broke out and "red alert sirens were sounding at least twice daily." Beach times by the Mediterranean Sea are interrupted by rocket alerts.

Yet the Leitners insist "the future is bright" for Israel; "its people are among the happiest in the world ... there is so much more than what is shown in the popular media." Their book is a corrective, with something surprising on every page.

Michael and Sara Leitner will be presenting their book and signing copies at Congregation Beth Israel, 1336 Hemlock Street in Chico, this afternoon from 4:00 - 5:15 p.m. Admission is free and light refreshments will be served.

Posted by Dan Barnett at 9:46 PM No comments:

It doesn’t have to be “creation vs. evolution” 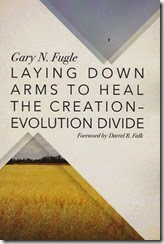 Consider: “A graduate student immersed in evolutionary biology at a major university was on the verge of completing his doctoral degree when Jesus captured his heart and he turned over his life to the sovereign God of the universe.” Did becoming a Christian committed to the Bible’s authority mean the end of this student’s studies in evolutionary biology? Not at all, writes Gary Fugle, longtime biology instructor at Butte College, recently retired. In fact, says the Paradise author, and my friend, “this is my story.”

That story has led to “Laying Down Arms To Heal The Creation-Evolution Divide” ($35 in paperback from Wipf and Stock), just-published and the product of years of reflection. Fugle writes to those “who are softened to the possibility of reconciliation in which the powerful message of Christian faith and the fascinating scientific understanding of evolution are integrated,” not to young-earth creationists or to “committed atheists ... convinced that these are two mutually exclusive propositions.”

Identifying himself as an “evolutionary creationist” (“God utilized the modifying and molding processes of evolution over very long periods of time to create the vast diversity of life on earth”), Fugle addresses a number of issues with compassion and grace: Was there a real Adam and Eve? Was there death before the Fall? Doesn’t an evolutionary view require purely naturalistic explanations? Why would God use evolution?

The book is not defensive; rather, in clear, accessible language, it’s a celebration of science (especially the section on “the value of biological evolution”) and a paean of praise to the Creator.

The author will present a talk entitled “Should God Be Mentioned in Public Science Classrooms?” at the Science and Religion conference, February 6 (5:30 - 8:30 p.m.) and 7 (8:00 a.m. - noon) at Colusa Hall on the Chico State University campus. Suggested donation at the door is $10, $5 for students. Check “Science and Religion Conference (2015)” on Facebook for details.

Posted by Dan Barnett at 9:43 PM No comments:

God, miracles and free will 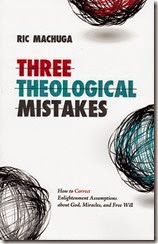 Butte College philosophy instructor Ric Machuga, my friend and colleague, has just published “Three Theological Mistakes: How To Correct Enlightenment Assumptions About God, Miracles, And Free Will” ($33 in paperback from Cascade Books).

For Machuga, the European “Enlightenment” of the seventeenth and eighteenth centuries, with the flourishing of experimental science and consequent love of mechanistic explanations, seriously distorted the thinking about God. The consequences, he writes, have been profound, and profoundly disturbing.

Mechanism assumes that “physical causes always have predictable effects fully determined by the laws of nature.” If that’s the case, so Enlightenment thinking goes, then these laws can be fully quantified mathematically. The implication is that “if something is physically caused, then it was not caused by God” (and vice versa). And the cause has to be one or the other. If an outbreak of cholera devastates the invading Assyrians, then the Biblical tradition ascribing the cause to God (Isaiah 37:36) is rejected.

These are all bad ideas, Machuga argues, because they’re false, but also because they embroil Christians in controversies over free will vs. an all-powerful God; who or what is responsible for evil; whether God acts miraculously; how hell can exist if God is good; and whether God’s existence can be known in the first place.

By contrast, the author responds with comprehensive “correctives” drawn from the perhaps surprising agreement between St. Thomas Aquinas, the thirteenth-century Catholic philosopher, and Karl Barth, the Reformed Protestant theologian in the twentieth. The book will repay careful reading and may lead to an “enlightenment” of a far better sort.

What unfolds is an understanding of God and his creation that transcends either/or thinking, exposes Enlightenment errors, and sets the stage for the working out of a deep and winsome Christianity.

Posted by Dan Barnett at 9:40 PM No comments: