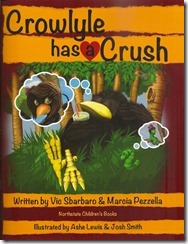 Vic Sbarbaro and Marcia D. (Sbarbaro) Pezzella are back with the third entry in their "Crowlyle" series for kids. This time, "Crowlyle Has A Crush" ($12.95 in paperback from Northstate Children's Books). Featuring full-page color illustrations by Ashe Lewis and Josh Smith, the book uses short rhythmic lines to tell the story of the big dance. Crowlyle has fallen for Crowlia, but a bully steps in and dances with her instead. Yet Crowlyle, grooving to "Crowbait, the coolest DJ," wins the day and wins her heart. 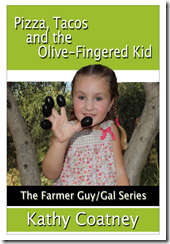 Northstate photojournalist Kathy Coatney (kathycoatney.com) has written the third in her "Farmer Guy/Gal Series." "Pizza, Tacos And The Olive-Fingered Kid" ($9.99 in paperback from CreateSpace; also available in Amazon Kindle and Barnes and Noble Nook e-book formats) features a full-color photograph on each page along with simple commentary. The book is intended for second and third graders (there's a short vocabulary list at the end) and tells the story of Farmer Charlie and Farmer Nick, both Corning olive growers. Charlie raises Sevillanos; his trees "are really, really old. They were planted before 1900." Nick raises a different kind of table olives, Manzanillos. "Farmer Charlie's Sevillano trees grow giant olives that are big enough to fit on his fingers. Farmer Nick's olives are smaller, and they fit on kid-sized fingers." 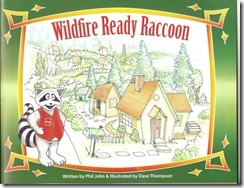 The Butte County Fire Safe Council, headquartered in Paradise, has published a cool little book called "Wildfire Ready Raccoon" (available in paperback for a small donation; contact Executive Director Calli-Jane Burch, firesafe@buttefiresafe.org; the Website is at thenet411.net). Written by Phil John and illustrated by Dave Thompson, both Paradise residents, the book tells the story of Ready Raccoon (also a Paradise resident) who one day smells the smoke of a wildfire. "Ready gathered with all his neighbors, the animals ones and the people ones, and watched the fire burning towards their little town. The smoke was thick and black, and they could see flames shoot up from the trees as the fire grew and moved closer to their homes." Some suffered great loss, and Ready was determined to make sure his own home was ready. Firefighter Jim helps out, and the book is a good guide for how to be wildfire safe. Ready is now the mascot of the Paradise Fire Safe Council.

Where is God when you're dying? 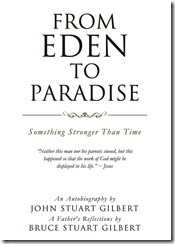 John Gilbert was born in 1976 in Castro Valley's Eden Hospital. Eventually he and his younger brother Alan, and his parents, Bruce and Cathy, moved to Paradise. In between was the terse phone call from the doctor. "I'm calling to inform you that your son's lab tests are in. John has Duchenne muscular dystrophy. His life expectance is 16 years." Diagnosed at five, John would live another twenty years, years full pain and grief beyond measure, but also of a growing Christian faith. His parents' own faith, tested in the extreme, meant following Jesus in a way they had never understood before.

John left a manuscript that he hoped, one day, would see publication as a testament to God's goodness. His father has much to say as well, and the result is "From Eden To Paradise: Something Stronger Than Time” ($22.99 in paperback from Xulon Press; also available in Amazon Kindle and Barnes and Noble Nook e-book formats), "an autobiography by John Stuart Gilbert; a father's reflections by Bruce Stuart Gilbert."

Bruce Gilbert is scheduled to be interviewed by Nancy Wiegman for Nancy's Bookshelf, this Friday at 10:00 a.m. on Northstate Public Radio KCHO (91.7 FM).

John's service dog, Friedman, a "spry and handsome" Golden Retriever, would become his best friend. When John graduated with honors from Paradise High, John, in his wheelchair, accompanied by Friedman, accepted his diploma. When he turned to go down, "I saw something that shocked me. All of my classmates, even the ones I didn't know, and all of their families stood on their feet applauding me and cheering me on."

Bruce, in the second section of the book, notes that the standing ovation provoked not a feeling of being honored but one of being betrayed. Where were parents and students when John was being harrassed by bullies, especially in junior high, and when he needed human companionship? An ovation is easy; living the daily life with someone as broken in body as John, humbling.

But the excruciating dailyness is the place God met John and Alan, Bruce and Cathy. Bruce writes with the love of a father and heart of a pastor, John as one transformed by suffering. Where is God when you're dying? Thankfully, right here.

The story of timber operations east of Chico 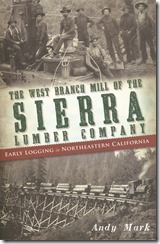 "Hidden below the steep, rocky walls of Big Chico Creek Canyon," Andy Mark writes, "located in the foothills east of Chico ... , lies a story of hardy men who, at the turn of the twentieth century, often risked life and limb to help shape the growing western frontier. Today this country is mostly inaccessible by vehicle, except to Sierra Pacific Industries and the loggers. ..."

Mark, who worked as a railroad brakeman and conductor for more than two decades, returned to Chico State University and emerged a data analyst. But he is also a member of the Butte County Historical Society and an avid hiker and mountain biker. As he traveled the back country of Butte and Tehama Counties, he was intrigued by traces of milling operations. Standing on the shoulders of local historians W.H. Hutchinson and John Nopel, he "felt the only way to get unique stories about this place was to literally go back in time by reading what the newspapers then had to say about it."

The stories come together beautifully in "The West Branch Mill Of The Sierra Lumber Company: Early Logging In Northeastern California" ($19.99 in paperback from The History Press, www.historypress.net). It features dozens of carefully selected black and white photographs and maps.

Mark will be signing copies of his book this Thursday, November 15 at 7:00 p.m. at Lyon Books in Chico.

Mark is intrigued by the process a century ago: "The rough-cut lumber from the mill was sent down a twenty-five-mile-long flume to the Chico factory, which specialized in fruit box and tray stock and more. Injured loggers were sometimes sent in makeshift boats down this same waterway. ... There was essentially only one way to get to the mill from the valley, and that was on the Humboldt Wagon Road" which was not exactly a smooth ride.

"In 1900," Mark writes, "it was reported that Sierra Lumber Company paid out more money for labor than any other industry in Butte County, primarily because of the West Branch Mill." The centerpiece of the book is the story of Dr. N.T. Enloe who became on-site physician for the West Branch Mill in 1901.

In the end, says Mark, "we tip our hats to the boys of yore."

Visiting poet writes of the loneliest snake in the world 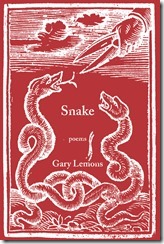 Gary Lemons makes his home in Port Townsend, Washington; he visited Butte College last month for a poetry reading. "Snake" ($19.95 in paperback from Red Hen Press) is a series of poems, mostly in the voice of Snake himself, in response to old Mother Earth's revenge "as a planet under assault" from the human enterprise. "Snake is the last thing left alive," Lemons says in an interview that sets up the book. "The not quite disembodied voice of all the forms destroyed in the cleansing ... an intentional cleansing--down to the basic elements."

Earth is ticked and wants to put an end to Snake, the refuge of "the exiled of earth, the ones that wait inside the collective dream, to return to the planet." Snake's distinctive voice, interspersed with a poetic chorus, will not allow the reader to go, as that other poem says, gently into that good night.

In "Snake's Karma," probing questions: "Why not some better endin / For everything--why we got to bring / Down the whirlwind on ourselves, / Past and present rubbed together / Til the future's set on fire? // Why can't we do this simple / Thing--love one another, love the land / Includin the land of one another / And the planet where it happens?"

"If in the end," the poet says in "If," "there is only snake and his / Stetson filled with shadows. ... // Then freedom is not the thing but the ghost / Of the thing and the thing is long gone / Leavin only the inexplicable comfort of its touch. ..."

As a "Last Resort," Snake's "tired of bein the only target" so "he finds this poet name of Gary--gonna make him / See how it is, tell him bout the situation. // He sneaks into Gary's head while he sleepin, / Describin these things, tells him--write a poem. ..."

But Snake swallows god, and saves the earth. The tide turns.