"What Became Of Little Jackie Smith?: A True Story Continued" 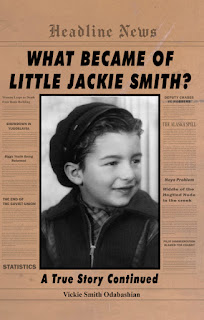 In 1950, a woman named Victoria jumped to her death from the top of the Security Bank Building in Fresno. For decades now her granddaughter, Vickie Smith Odabashian (after whom she is named), has been piecing together her story and that of her husband, Smitty, and their son Jackie Smith (Vickie's dad) and in so doing discovering her Armenian heritage kept hidden by Victoria's family.

Her dad reminded her of the fictional Andy Taylor of Mayberry, played by Andy Griffith: "Each was a lawman with uniforms similar in color and design, and both had a laid-back persona and a small-town approach to life." He worked in the Butte County Sheriff's Office, including as a detective and in search-and-rescue; some of his colleagues called him "Gentleman Jack."

But there is more to Jack's story, and until his death in 2012 he helped fill the gaps in what Vickie knew about her dad, including his traumatic childhood. Now the question can be answered: "What Became Of Little Jackie Smith?: A True Story Continued" ($15 in paperback from the Victoria Lazarian Heritage Association, available locally at the Cornucopia restaurant in Oroville; also for Amazon Kindle.)

Each chapter begins with "Little Jackie Smith Became..." followed by such titles as "An Astute Lawman"; "A Man of Principle"; and "Well-traveled."

Something of an Oroville-based Forrest Gump figure, he met Ronald Reagan during the dedication of the Oroville Dam. Later in life, stepping away from local law enforcement, he became a Cleared American Guard after working in Prudhoe Bay, Alaska during the Exxon Valdez disaster. He was assigned to Belgrade, Yugoslavia, helping to protect the U.S. embassy there and then moved on to Moscow.

Vickie writes that reflecting on her dad's memorabilia, kept in his old Samsonite suitcase, "I realized that Little Jackie was not entirely left in childhood. ... I noticed it in the softening tone of my dad's voice in the mid-1990s when he first shared stories of his childhood with me for my college class assignment."

This is a quiet homage to a good man with a wide grin who faced so many challenges one could write a book about them.

"Paradise: One Town's Struggle To Survive An American Wildfire" 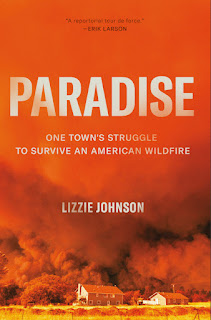 The Chico Record called it "Paradise: The Town with a Future" on July 3, 1908. Now, rebuilding in the wake of devastation and contending with PTSD-inducing smoky skies, the future is decidedly mixed.

Former San Francisco Chronicle Journalist Lizzie Johnson, now with the Washington Post, embedded with some who survived the Camp Fire to produce an account of that harrowing day in November, 2018. Johnson's story, the fruit of 500 interviews, is unrivaled in its gripping emotional intensity, taking readers deeply into the lives of mostly working-class Ridge residents that fateful Thursday.

"Paradise: One Town's Struggle To Survive An American Wildfire" ($28 in hardcover from Crown; also for Amazon Kindle and in an author-read audiobook) bears witness, Johnson writes in the acknowledgements, "to the human cost of climate change.... I have hoped that my reporting would force others to heed the wildfire crisis unfolding in California. I have hoped that it would deeply honor fire victims...."

The book is divided into five parts (Kindling, Spark, Conflagration, Containment, and Ash), with an epilogue taking into account the September 2020 North Complex fire that "killed sixteen people and leveled the hamlets of Berry Creek and Feather Falls."

Here are CalFire division chief John Messina, dispatcher Beth Bowersox, bus driver Kevin McKay, Heritage Paradise maintenance worker Jamie Mansanares and his and Erin's child Tezzrah, and Rachelle and Chris Sanders, and their newborn, Lincoln. Their stories, and others, told in astonishing detail, show courage and human frailty in the midst of a fire with a mind of its own.

PG&E admitted culpability. The line broke on Tower 27 / 222, "the snapped cable flapping in the wind" because an old hook gave way. "Wind and weather had catalyzed its slow decay. It had been bought for 22 cents in 1919; a replacement hook in 2018 would have cost $19."

Those who attended the anniversary commemoration of the Camp Fire "thought of all the things they had lost: the Gold Nugget Museum, the Elks Lodge, Mendon's Nursery. The old Paradise sign topped by the bandsaw halo." Eighty-five lives.

This is stunning reporting, a chilling reminder of the continuing peril facing our beloved Ridge.

"The Ruins Of Rough & Ready" 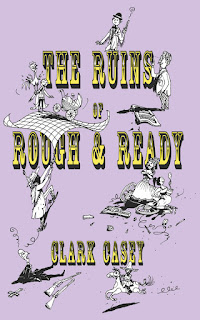 Northern California writer Clark Casey is no stranger to the Chico Nut Festival; he is, he says, "a bit of a nut nut." Which is good, since his new novel is just nuts. He plays it straight with historical reality--until about page 2.

The "historical" part comes in a short paragraph that sets things up. "Although there is some debate, the widely told story is that in 1849 a group of Wisconsin miners founded the town of Rough and Ready, California, which they proudly named after General Zachary 'Rough and Ready' Taylor. Shortly after, Zachary Taylor became president of the United States and passed a new tax on mining claims."

Rough and Readians didn't take kindly to that idea and "voted to secede from the country and form their own independent republic. They remained a sovereign nation for nearly three months before voting to rejoin the union. There is no indication that the United States government ever knew of the secession."

So what happened between April 7 and July 4, 1850? Call it "The Ruins Of Rough & Ready" ($20.99 in paperback from White Bird Publications; also for Amazon Kindle; see clarkcasey.com).

The book is over-the-top funny and graphically violent, pretty much par for the curse in the Old West--the curse being gold-digging. Cue the get-rich-quickers. Thus, Rough and Ready, all men except for three women.

The only gatherin' spot in town is Lost Souls Church/Saloon (the reverend-barkeep forbids swearing). When Billy Fippin, the town drunk, discovers a huge gold boulder after an earthquake, it's clear the new tax will hit hard. Secession is the way out, and eventually Billy is elected President (after considerable squabbles among the bar's patrons, justice-served gunplay and a mountain of grief that lasts about a minute) with a rooster elected VP.

The question becomes how to get the huge nugget past the highwaymen and Alfred Slocum, who wants to plow under R&R since his dad owns the land. Time passes, and the reader is introduced to a host of oddballs, compelling back stories (the prissy reverend is not what he seems), and a plot so crazy it would have poor old Sisyphus LOLing.

"Tongue In Chico: A Decade Of Merriment And Mayhem In A Town Near Normal" 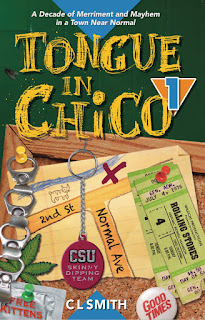 C.L. Smith lives with his wife in California's wine country. When he graduated from Chico State in the late 1970s, he went into advertising and "played a key role in developing the iconic 'Don't Drip and Drive' and 'Can you hear me now?' ad campaigns for Winchell's and Verizon."

But something kept nagging him (it wasn't his conscience, which would have had better sense). For three years in Chico he had written humor columns for Richard Peifer's Butte County Bugle and landed his work in other publications as well, and maybe it was time to revisit his college days.

Teaming with designer/illustrator Randy Nowell, Smith and Nowell created an illustrated compendium (with new material too) designed to display something of the sexualized absurdity of those days. They call it "Tongue In Chico: A Decade Of Merriment And Mayhem In A Town Near Normal" ($7.49 in paperback from Tenderfoot Books and tongueinchico.com; also for Amazon Kindle). Think Mad Magazine. Only dirtier. As in lots of references to zucchini.

Smith recalls "the rollicking 1970s...when skinny-dippers ruled Upper Bidwell, the pot grown in the foothills sold for $6,000 a pound, and the mirrors of Craig Hall were lined with pure cocaine. And/or baby laxative."

Divided into four parts, Smith starts with Chico, then Santa Cruz (where he becomes managing editor of the alt weekly Good Times), then Orange County (where he meets lots of Hollywood celebs), and back to Chico with a naughty story of "The Legend of Calamity Jane and the Hooker Oak," involving Calamity and the Bidwells and it's a calamity alright.

"Confessions of a Parsley Grower" had me snickering. "How much is parsley going for on the black market?" Cohasset area grower: "We're getting anywhere from 15 to 35 cents a sprig now, depending on the strain and quality. More for heirloom."

For those who want a narrow view of college life, this book will take your breadth away.

"The Case Of The Missing Game Warden: A Henry Glance Mystery" 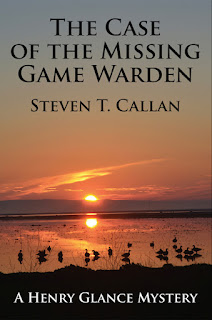 Before December 13, 1956, life was good for Norm Bettis, a California Fish and Game Warden living in Gridley with his wife, Martha. Then, at sixty-two, with creaking bones, he confronts a group of bad guys involved in an illegal duck hunting operation. Prized ducks were hidden inside turkeys and sold to Bay Area restaurants so big-ticket customers could have duck dinners.

It is pouring rain in the Gridley area on that fateful day when Bettis and his patrol car simply disappear. More than a decade passes, and the case grows cold.

So begins "The Case Of The Missing Game Warden: A Henry Glance Mystery" ($16.95 in paperback from Coffeetown Press; also for Amazon Kindle), the first novel by Steven T. Callan (steventcallan.com). The Redding-area resident spent his high school days in Orland, graduated from Chico State, then in Shasta County concluded a thirty-year career as a game warden.

His two previous non-fiction books include the award-winning "The Game Warden's Son" and "Badges, Bears, and Eagles: The True-Life Adventures of a California Fish and Game Warden."

Now, in novelistic form, he turns his attention to a young Temecula man named Henry Glance, whose baseball-scholarship hopes are dashed in the late Sixties when his hand is injured in an accident. Stanford is out, but Chico State College beckons.

As a kid, Henry had stopped two goose poachers near his Southern California home and heard about Bettis' strange disappearance from the game warden who arrived. Eventually Henry himself becomes a warden, assigned to the Gridley area and Bettis' old territory. Blessed with good sense (and a photographic memory), the twenty-something warden is convinced he can solve the mystery and bring some closure to Martha.

Callan's story is a fascinating blend of detective work and chance encounters, and the kind of intuition needed to turn those encounters into actionable evidence. The issue is not so much whodunit but what it takes to convince a jury. The procedural aspects of the case illuminate the life of the warden set against a backdrop of 1970s Chico--and Gridley, where Henry and his bride live, ready to take on what comes next.