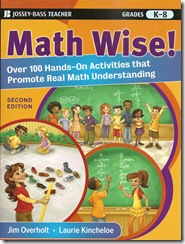 Perhaps the subtitle of "Math Wise!" ($29.95 in paperback from Jossey-Bass), by Jim Overholt and Laurie Kincheloe, sums it up: "Over 100 Hands-On Activities that Promote Real Math Understanding" for Grades K-8. Now in its second edition, the book is aimed at helping students understand concepts that range from counting to data analysis.

Overholt is an education professor at Chico State University; Kincheloe teaches mathematics at Butte College. Both have extensive experience working with K-12 students and their parents, and especially with elementary school teachers.

A grade level is provided for each activity, which include those that are "concrete/manipulative" (such as illustrating division using paper clips); "visual/pictorial" (3 x 5 can be shown by three horizontal lines crossed by five vertical ones); and "abstract procedures" (in Post-It Mental Math a student tries to guess the numerals stuck to his or her back using clues provided by others in the group). "Math Wise!" encourages teachers not only to "instruct students in regard to mathematical mechanics but also enable them to gain a true understanding of the concepts involved."

Each activity explains what the exercise is designed to accomplish (such as practicing computation, getting friendly with fractions, or learning about probability). There's a list of materials needed and detailed steps and examples that give ample guidance for teachers. There are also "extensions" that provide additional ways of using the activity. Many of the activities in the book are for entire classes, others are for small groups, and still others work best as independent projects.

My own mathematical knowledge is, uh, a fraction of what it should be, and I found myself delighted at the creative approaches--and sophistication--that "Math Wise!" embraces. Take "Palindromic Addition." (A palindromic number is reversible.) The activity uses pencil and paper. Pick a non-palindromic number less than 1000, then add its reverse, and continue until a palindrome is produced. 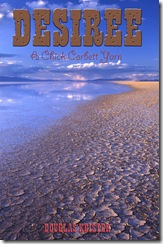 Perhaps best known for his beautifully photographed books on Bungalows and classic travel trailers, Chico's Doug Keister has pulled up his sleeves and written himself a yarn.

Told by one Clarence (Chick) Corbett out of Gerlach, in the northern Nevada desert, "Desiree" ($15.97 in paperback from lulu.com, http://bit.ly/cD3YNd) introduces larger-than-life characters and an international smuggling operation. Chick, in his early twenties, writes an "apology" at the start of the book. "A lot of it's true, that's for sure. Some of it's a bit of stretch. And some of it's an outright lie."

Like Desiree herself. "My feelings are pretty simple," Chick writes. "I mostly feel either good or bad. Lately though, I've added a feeling. I think I'm going to call that feeling, confused. . . . I started feeling that way after I met a woman named Desiree. That's Des-er-ay." She had broken into his cabin. There was also another guy there, a dead man. "I killed him," says Desiree.

She was dressed as a lady of the night, "a five-foot-six-inch angel with flowing red hair the color of sunset, large liquid green eyes and skin as smooth and soft as an old pair of Levis. . . . She was wearing this thing that looked as though she'd been poured into it. I think my hat had more material in it than that dress. . . ."

But Desiree is not what she seems, and there unfolds a tale that involves the FBI, nefarious operations out of Beijing and Hong Kong, a raft of bad guys, and a mysterious powder. It's a fast-paced hoot.

Gerlach has "just one gas station, five bars and 150 citizens occupying pretty much all the available notches on the evolutionary ladder." Uncle Ray sleeps "suspended by gravity boots." There's also Elwood LeFoote, "a grizzled Basque of indeterminate age" who herds sheep with a dog named Phydeaux and Strawberry Finches that live in his capacious beard. And Chick's best friend, Tom Twotrees, "half Navajo and half Paiute," who eschews pants in favor of "a strategically placed badger pelt."

Maybe this quote from Mark Twain, on the back cover of the book, sums it up: "Douglas Keister is a masterful storyteller. If I was alive, I'm sure I'd recommend this book."

Local Taoist author publishes book on the practice of forgiveness 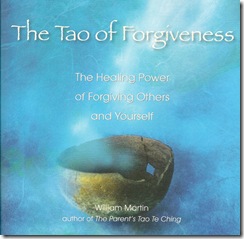 Zen and Taoist author William Martin of Chico writes that "forgiveness is not something to be figured out." Instead, it's something to be practiced, but from the perspective of what he calls the "Tao Mind," "a direct experience of the spacious unconditional acceptance found in the Tao . . . the Mystery behind all mysteries."

Rather than offer "Ten Tidy Tips to Total Forgiveness" Martin writes that "I am constrained by the nature of the Tao Itself to offer stories, parables, poetry, and meditative exercises." He is a gentle and self-deprecating guide as he ushers the reader into "The Tao of Forgiveness: The Healing Power of Forgiving Others and Yourself" ($15.95 in paperback from Jeremy P. Tarcher/Penguin).

Martin is scheduled to appear on Nancy's Bookshelf, hosted by Nancy Wiegman, this Saturday at 4:30 p.m. on KCHO (Northstate Public Radio) in Chico at 91.7 FM. In addition, he'll be signing and discussing his book at Lyon Books in Chico on Wednesday, May 19 at 7:00 p.m.

For Martin, what stands in the way is "the conditioned mind, or ego in its many forms, that does the resenting, clinging, shaming, blaming, wanting, needing, judging, and suffering that limit our experience of the intrinsic forgiveness of the Tao Nature and of our Tao Mind." The twenty-three short teaching stories in the book are designed to help the reader move, if for just a moment, from the labels and categories applied by the "conditioned mind" to the nonjudgmental acceptance of all that is.

But such acceptance doesn't mean that everything is "okay." In one of the Tao Mind exercises, Martin writes that "I would never suggest that our anger is wrong. It is merely what it is--an emotion stirred by a reaction within us that someone or something is wrong and that wrongness makes us feel unsafe. Our forgiveness practice involves turning our attention, first to the one within us who is feeling that anger and fear, and then letting the natural energy of our Tao Mind, uncontaminated by this fear, direct our course."

Though Martin's worldview is very far from my own, his book offers interested readers a taste of how an ancient tradition might speak to a modern world full of anger and fear. 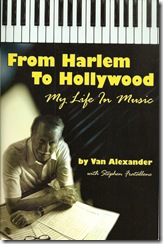 It was 1938, and Ella Fitzgerald was bugging arranger Al Feldman to do something with the old nursery rhyme "A-Tisket, A-Tasket." So Feldman went home and fiddled. "I put the piece into a 32-bar frame. I added the release (middle section), the bridge, and wrote all the novelty lyrics, including the dialog between Ella and the band where they sang 'Was it red? No, no, no, no. Was it blue? No, no, no, no." Fitzgerald recorded the song on May 2, 1938. "I had no idea," Feldman says, "what to expect. Recording music is much like the game of roulette, using ten-inch 78RPM platters as the chips."

Al Feldman was born Alexander Van Vliet Feldman in Harlem on May 2, 1915. In 1936 he found himself arranging for the Chick Webb Orchestra, the house band at the Savoy Ballroom in Harlem. Soon he received an offer to become a band leader himself, and he changed his legal name to Van Alexander.

His story is recounted in "From Harlem to Hollywood: My Life In Music" by Van Alexander with Stephen Fratallone ($19.95 in paperback from BearManor Media). Alexander writes me that the book is "a finalist for the 2010 Association for Recorded Sound Collections Awards for Excellence in Historical Recorded Sound Research."

Fratallone is a Chico writer and jazz aficionado who has ably translated Van's first-person reminiscences to the printed page. The book contains dozens of black-and-white photographs as well as a discography.

About that nursery rhyme. "Lady Luck was on our side. The record broke big. It became the nation's number one hit song that summer, staying at that position on the Lucky Strike Hit Parade radio show for nineteen consecutive weeks."

The book is plain fun to read. After Alexander moved to Hollywood he worked with Les Brown, the musical director of the Dean Martin Show. There are plenty of stories.

"I started off as an arranger," Alexander says, "then composer, and then band leader. If I had made any contribution to the world of music, I hope it was to bring credibility, respect, and importance to the task of helping to make a piece of music sound like it has a life of its own." A fitting goal, admirably realized.