"In The Shadow Of The Hanging Tree" 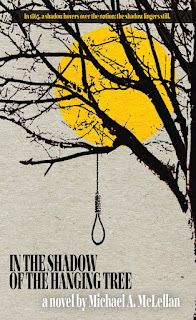 For Portola novelist Michael McLellan (michaelamclellan.com) it started in Chico. "In 2010," he emails, "I bought the house my grandparents had purchased new in 1962 (a stone's throw from lower Bidwell Park) from my grandmother's estate. I wrote a fair portion of my first novel on a picnic table" near the creek.

McLellan has produced in his third novel a searing tale of the 1860s, intertwining Southern slavery with massacres of Native Americans as white settlers expanded Westward. It is not for the squeamish.

"In The Shadow Of The Hanging Tree" ($15 in paperback from Sweet Candy Press; also for Amazon Kindle) begins in 1861 in Missouri, charting the horrific life of twenty-year-old Henry, a newly freed slave, attempting to escape the roaming militias intent on killing runaways.

Caught by Emmet Dawson and his band, Henry and his companion Eliza face almost certain death. They are taken to a big tree by the road. "There were six people hanging from the tree limb. Even with the blood from his cut face blinding one of his eyes, Henry saw more than he could bear: five men and one small boy, all slaves."

There is a parallel story. In 1865 John Elliot is expelled from West Point at the behest of influential East Coast businessman Jonathon Hanfield. He is shipped off to Fort Laramie in the Dakota Territory to assist Colonel Frank Picton "with the Indian situation." John, in love with Hanfield's daughter Clara, is also the son of Hanfield's rival.

Henry survives, recuperates with the Cheyenne, and becomes a military guide at Fort Laramie. When it becomes clear that Picton has formed a militia intent on fomenting an all-out race war against the indigenous peoples, Henry and John (now reunited with Clara) face stark choices. There is graphic violence (with the N-word used fifty times) in this deeply affecting, gut-punch of a novel.

"The white man only knows desire," Standing Elk tells Henry. "He knows nothing of contentment. ... The white soldiers murder without regard, but themselves are spiritless and go screaming into their own deaths as they were born into life. ... There can be no peace with such men."

"All They Will Call You" 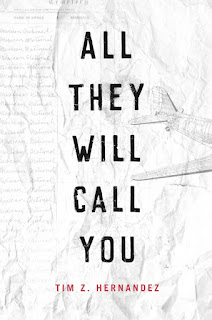 For writer and performer Tim Hernandez, Woody Guthrie's poem "Plane Wreck at Los Gatos (Deportee)," with music by Martin Hoffman, "was the beacon." Popularized in concerts by Pete Seeger, the song was a biting commentary on the crash of a Douglas DC-3 in Los Gatos Canyon on January 28, 1948.

According to a news report back then, "broken and charred bodies and an indiscernible heap of debris were all that were left of a government chartered flight from Oakland, which would have taken 28 Mexican Nationals to their homeland...."

The song puts it this way: "The crops are all in and the peaches are rotting/ The oranges are piled in their creosote dumps/ They're flying you back to the Mexico border/ To pay all your money to wade back again. ... You won't have a name when you ride the big airplane/ And all they will call you will be deportees."

Who died that day in Los Gatos Canyon? In a gripping retrieval of history, Hernandez has crafted a page-turning account of passengers and crew and their hopes for a better life. "All They Will Call You" ($16.95 in paperback from The University of Arizona Press; also for Amazon Kindle) by Tim Z. Hernandez (timzhernandez.com) is the 2018-2019 Book in Common for Chico State University, Butte College, and a host of area organizations.

Hernandez will speak at Chico State's Laxson Auditorium on Wednesday, March 13 at 7:30 p.m., part of the President's Distinguished Lecture Series. Tickets are $20 for adults, $18 for seniors, free for youth and Chico State students. Tickets for the performance are available at the University Box Office (csuchico.edu/boxoffice) or call (530) 898-6333.

The book chronicles the grisly crash, the witnesses, and the lives of the crew and some of the passengers, including Luis Miranda Cuevas who heard, in 1946, "that even though the war was over, trains leaving Guadalajara for los Estados Unidos could still be found, and braceros were still needed." Once in the U.S., workers engaged in a strange dance with the needs of agriculture and the long reach of "la migra," the immigration authorities.

It is a harrowing account, told with compassion, lyricism, and hope.

"From Profits ... To Prosperity" 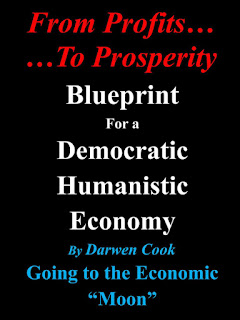 Retired electrical engineer Darwen Cook of Chico wondered some years ago what would happen if economics was viewed from an engineering perspective. "Economics," he writes, "had no cohesive guiding principles like the other sciences that I studied and used for engineering." Worse, he says, economists focus on profits rather than prosperity. What would happen if all that changed?

His answer is detailed in a comprehensive set of recommendations that is at the same time a manifesto for an Economic Humanist Party movement. Cook calls his idea "economic engineering," an approach "based on axiomatic principles and human rights intended to achieve maximum economic prosperity for the vast majority of all humanity sustained indefinitely."

"From Profits ... To Prosperity: Blueprint For A Democratic Humanistic Economy" ($19.95 in paperback, independently published; also for Amazon Kindle) is written in the form of proposed legislation Cook dubs the Humanist Economic Reform Act (HERA).

It's informed by the Economic Bill of Rights, which Cook says is implied in the U.S. Constitution. Key rights include "the right to equal valued pay for equal valued work," "the freedom from the oppression of an economic privileged class," and "the right to a living wage sufficient to achieve life, liberty, and the pursuit of happiness."

"I have reformulated Capitalism," Cook writes, "as a democratic, axiomatic, mathematical system. I call this reformulation 'Humanism.'" The axioms act like a kind of Euclidean geometry for economics. They are not the product ofeconomics but rather introduced from the outside (by an engineer) to guideeconomics.

The first, for example, maintains that "the fundamental reason our economy exists is to serve humanity in facilitating the worker/consumer duality by achieving maximum prosperity for the vast majority of mankind." It recognizes that humans shouldn't be treated as commodities "such as zinc or soybeans .... This axiom ends the possibility of economic slavery once and for all!"

His proposal involves expanding the Federal Reserve into a fourth branch of government, called the independent Economic Control Authority, and the replacement of Social Security with a "National Fund payroll deduction plan" to increase retirement benefits.

What if the economy were engineered for human prosperity? Here, at least, is one man's answer.

Email ThisBlogThis!Share to TwitterShare to FacebookShare to Pinterest
Labels: economics 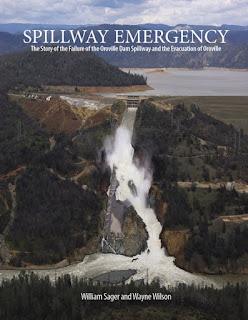 Oroville Dam, February 7, 2017. "As water releases from the flood control spillway ramped up to 54,500 CFS (cubic feet per second) in anticipation of inflows expected from rainfall, DWR (Department of Water Resources) employees noticed an unusual flow pattern; the bottom of the spillway appeared to have suffered partial collapse."

As William Sager and Wayne Wilson note in a chilling, book-length account of what happened next, "the initial discovery of the problem was almost by accident." Two DWR electricians, making a routine check, saw concrete "flying through the air on the spillway," a piece described as "'about the size of a Volkswagen minibus.'"

Five days later, with the main spillway crumbling and water overtopping the dam's emergency spillway for the first time in its history, Butte County Sheriff Kory Honea ordered the evacuation of 180,000 downstream residents.

The hour-by-hour story, what journalists call a "tick-tock," is told in "Spillway Emergency: The Story Of The Failure Of The Oroville Dam Spillway And The Evacuation Of Oroville" ($20 in paperback, independently published; also for Amazon Kindle). Sager and Wilson, both fire service retirees and Oroville residents, were among those evacuated.

They conducted interviews and scoured documents and have produced a superb account, fair to all sides, covering "triumphs" as well as "missteps" (especially by DWR).

The book doesn't assess causes of the main spillway failure; after a survey of flooding incidents in Oroville since 1849, it focuses on how CAL FIRE (which provided emergency response mentoring), DWR (led by Acting DWR Director Bill Croyle), and local law enforcement had to set egos aside and work as a unified team. It did not come easy, but it happened.

February 12. "At 2:00 p.m., the emergency spillway was already eroding at the rate of thirty feet per hour." Structured as a series of connected "monoliths," at 3:15 it appeared monolith 3 might collapse. "At 3:50 p.m., a DWR geologist briefed the unified incident commanders in the DWR boardroom. 'Imminent failure of weir due to head cutting, one hour to go before that happens.'"

One hour before the unthinkable.

In the forward, Honea says the book "chronicles one of the most tense, uncertain, and frightening experiences of my career."