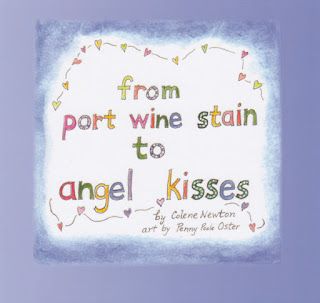 "Hello," the children's book begins, "my name is Leonardo Joshua, but you can call me Leo. I was born with a rare birthmark on my face called Port Wine Stain. Do you have a birthmark anywhere?"

Leo is a real little boy, the son of former Chicoan Shawntel Newton and her husband, orthodontist Paolo Poidmore. As People Magazine notes, "Newton--a former funeral director, who placed fourth on Brad Womack's season of The Bachelor in 2011--gave birth" to Leo, their second child, in October 2018. (For more about the challenges--and moments of grace--see shawntelnewton.com.)

Leo's grandmother, Chicoan Colene Newton, realized that Leo's narrative, which she had written for her grandson as a gift of love, might well be shared with a larger audience. "For some children," she writes, "things that make them unique might also make them look different." Teaming with Chico artist Penny Poole Oster, Colene presents Leo's own experiences (as well as more detailed information for parents) in "From Port Wine Stain To Angel Kisses" ($9.95 in softcover from Memoir Books, available on Amazon).

In the book Leo explains that his "Port Wine Stain covers half of my face including one eye and over my brain, which means I also have something called Sturge-Weber Syndrome. This makes me even more rare. There are not that many people born with this. ... I think that makes me really special. Is there something that makes you special too?"

The real Leo has had dozens of laser treatments "to help get rid of the redness. The lasers feel like someone is taking a rubber band and snapping it on my face; it hurts, but only for a second. ... Afterwards I have polka dots on my face; my mom and my brother call them my Angel Kisses. Have you ever had to be really brave?"

Oster's full-page watercolors illustrate Leo's journey. Sturge-Weber Syndrome can affect the eyes, so there are regular visits to glaucoma specialist James Brandt, M.D., at UC Davis. "He and I," Leo says, "like to make faces at each other, which makes us both giggle." Oster captures the moment beautifully.

This is what love does.

"The Art Of Stretching" 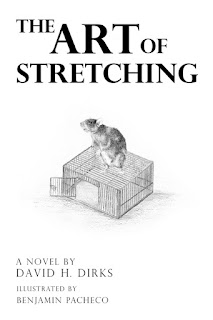 Twelve-year-old David Janzen is a wonderer at heart. Short of stature, he is tormented at Central Elementary School (where his dad is a science teacher) with a different epithet, that of "shrimp." It is the early 1960s in Del Rio Vista, "a small, central California farming community."

"At home," he observes, "I was a 'shrimp'--but I wasn't excluded from life because of it. At home, in my experiments, I could be someone. As long as Mom didn't know the details."

David tells his story in "The Art Of Stretching" ($8.99 in paper, self-published; also for Amazon Kindle) by David H. Dirks, Chico State grad, now a Livermore resident. Sketches throughout the book are by Benjamin Pacheco and help readers visualize what David is up to.

Dirks draws on his own memories for his quietly loving account of the fictional Janzen family. There are seven of them, two brothers, three sisters and a fair amount of squabbling. Young David has an eye for engineering but his initial balloon experiments end up terrorizing the neighbors (explosions, anyone?).

While his father gently encourages his explorations, his mom is wary. "I was a scientist and I needed room," David remembers. "Mom was always pulling me back, making me do my homework and insisting I go to church instead of sleeping in Sunday mornings. Mom did not understand science." Will she ever see the light?

Neighborhood kids throw dirt clods at David but secretly admire what he and his new friend, wheelchair-bound Jack, also twelve, are accomplishing. Together they create a new balloon inflated by natural gas from the science classroom's Bunsen burners, one which can theoretically climb a mile and release its occupant, a "rat-astronaut," safely to the ground.

Readers will find themselves rooting for David and Jack when launch day arrives.

David is always stretching, even as a kid reaching for the stars. It is fitting we turn our eyes heavenward this Christmas season and become wonderers as well. 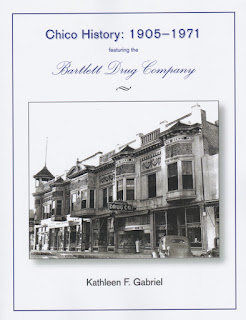 The ordinance passed by Butte County supervisors was stark: "All persons within Butte County must wear masks.... Failure to comply with the law is punishable by a fine of $50 or imprisonment for thirty days, or by both." It was November 17, 1918 and the "Spanish Flu" had hit hard. That year at least 104 Chicoans died of the disease.

Ironically, there was a bright side. Early in 1919 a newspaper account noted business at drug stores was booming: "Every druggist in Chico is riding along on a wave of prosperity that reached its crest last November and has not subsided yet."

Among the eight or so pharmacies operating in Chico at the time was Bartlett's, at 330 Broadway. Chicoan Kathleen Gabriel, who teaches at Chico State and has published on how to best serve underrepresented students, focuses on this downtown landmark to trace "Chico History: 1905-1971 Featuring The Bartlett Drug Company" ($55 in paperback from Memoir Books; available on Amazon). The book is beautifully designed, replete with hundreds of historical photographs, and meticulously researched.

Gabriel has deep roots in the community. "My paternal grandparents came to the Chico area around 1909," she writes, "and in 1921 their three-year-old daughter, Janette Ruth Martin, contracted catarrhal enteritis. Without antibiotics, she, like many other children with this and similar types of diseases, did not have much of a chance for survival.... She died in my grandmother's arms on May 21, 1921."

The pharmacy began as the Waste ("pronounced Wass-tee") Drug Company in 1905, became the Smith Drug Company and then, in 1909, the Bartlett Drug Company (operated by Raymond Schaller from 1944 until his death in 1971, when the business closed).

Gabriel's essential account immerses readers in Chico history, including the development of Enloe Sanatorium in Paradise, Sycamore Pool, Chico High, and much more. But it also gives a lot of love to advertisements (Palmolive Olive Oil shampoo, Gleem Toothpaste or Little Liver Granules, anyone?), the new "penny scale," the introduction of the rotary phone (in 1953 "Chico Goes Dial... New numbers will include the prefix Fireside 2"), competing pharmacies and candy stores, and prescription slips.

My prescription: Get the book.

"The Vault Of Adon" 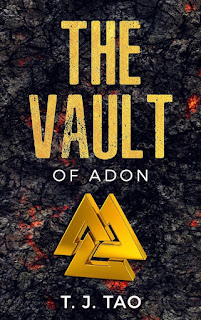 After Camp Fire survivor Michael J. Orr (wordsmithmojo.com) and his family moved to southern Idaho, he began writing a series of novels under the name of T.J. Tao that have grown ever more fantastical. His first, "Burn Scar," reimagined the fire as occurring in the town of Genna (Maltese, he writes, for "Paradise").

Among the characters is recovering alcoholic James Augustine who, in "Stone Scar," teams with Boise State University archaeologist Stuart Angeline as they find a portal in Idaho that leads to other parts of the world and to a monk named Adon, trying through the centuries to bring humanity to its senses.

With the apparent death of their antagonist, Gavin David (pronounced "dah-veed"), James and Stuart are confronted in the third novel with his twin brother, Marcel, who has even grander ambitions: "He wants to become a god." "The Vault Of Adon" ($13.99 in paperback from WordsmithMojo Publishing; also for Amazon Kindle) begins with an earthquake and ends with an existential threat to Islam and Catholicism.

Adon explains that the gods of mythology, such as Thor and Odin, were actually those who wielded sophisticated technology unknown to ordinary folk, but they all failed, and their weapons were buried deep in an Icelandic cavern, now revealed by the earthquake.

There, two locals, seventeen-year-old Ásdís Axelsson and her father Kristján, discover the vault; guarding it is a shield, which turns out to be the actual shield of Odin.

Marcel is following it all; his minions kidnap and torture Kristján in an effort to snare Ásdís, who has escaped with James. Does she have the key to opening the vault? Stuart is taken to the vault as well; with threats to his family he is charged with translating the strange symbols on the shield and vault entrance.

On the run, James finds Ásdís a quick study, accepting his bizarre story of ancient Travelers (Ava, called "Mother," is 11,000 years old) and godlike powers (through the strange metal Atlantium which tips Poseidon's trident and the spear that pierced Jesus on the cross).

If the vault is opened Marcel's quest will be fulfilled. Humanity's subjugation appears imminent, but the end, as they say, is not yet. 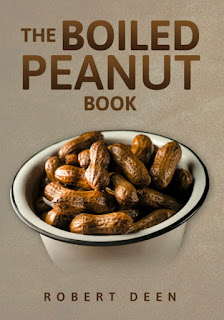 My sister-in-law, living in Alabama, tells me they are an acquired taste. Her husband picks up a can of them and munches throughout the day. "They" are boiled peanuts. Though part of southern cuisine, boiled peanuts (and how they are made) offer a challenge to the uninitiated.

Author Robert Deen quotes one of them: "At gas stations in the South, I've opened the lids on hot stainless steel kettles and looked at the boiled peanuts floating there, soggy and a bit slimy, but I have never had the courage to eat them."

Deen's new book is out to change that. It also contains instructions for do-it-yourselfers and lots of recipes for adding flavor. "The Boiled Peanut Book: Everything You Always Wanted To Know About Boiled Peanuts" ($9.99 in paperback, self-published; also for Amazon Kindle) is just plain fun reading (and will make boiled peanut aficionados salivate).

Deen graduated from Chico State with a Master's in Communications and, after a career in public relations, retired to the Oregon Coast to write. But he was born in Florida and knows a boiled peanut when he sees one.

"In a nutshell," he writes, "a boiled peanut is exactly what it says, a peanut boiled in the shell in salt water, often with a spicy mixture. The result is an extremely soft peanut in the shell, quite salty. The softened peanuts are easy to open and bursting with the boiling liquid which fills the shell during the boiling process.... A 'boil' of green peanuts often includes small, immature peanuts called 'pops,' super soft and edible whole, shell and all!"

They don't taste like roasted ("not even remotely") and there's a right and wrong way to eat them (all detailed in the book, along with the history of "goobers" and a plethora of recipes from around the world). They spoil quickly: "Boiled peanuts left at room temperature will only be good for a day" though they can be refrigerated and even canned.

Making your basic boiled peanuts will take up to six hours of simmering on the stove. You may need that long to decide whether to eat one.