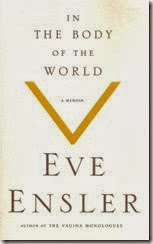 Best recognized as author of "The Vagina Monologues," Eve Ensler is also an internationally known activist and the founder of V-Day (vday.org), "a global movement to end violence against women and girls."

Her heart is in the Congo, with the women brutalized beyond measure, "women with missing limbs and reproductive organs, women with machete lashes across their faces and arms and legs ... women carrying babies the color of their rapists, women who smelled like urine and feces because they had fistulas--holes between their vaginas and bladder and rectum--and now they were leaking, leaking."

Ensler's childhood was also a story of bodily abuse. "I grew up not in a home but in a kind of free fall of anger and violence that led to a life of constant movement." A father's incest, a mother's emotional distance. Ensler "drank myself mad, numbed myself with drugs at sixteen, snuck out with grown men to the Fillmore East for the late show, lived naked on communes, and stole things."

Years passed. Then, "on March 17, 2010, they discovered a huge tumor in my uterus. Cancer threw me through the window of my disassociation into the center of my body's crisis. The Congo threw me deep into the crisis of the world, and these two experiences merged as I faced the disease and what I felt was the beginning of the end."

Ensler's harrowing story--in-your-face blunt--is told in "In The Body Of The World" ($25 in hardcover from Metropolitan Books; also available in Amazon Kindle e-book format, and as an audiobook read by the author).

The story of her treatment, the effects of chemo, the doctors, nurses, friends and family and people in the Congo gripped by her pain, the death of her mother, and how she became a survivor, is a searing account that is impossible to put down. The story, ultimately, is "about showing up and not forgetting, about keeping promises, about giving everything and losing everything." It is love, "endless and generous and enveloping."

Growing up in the logging camps 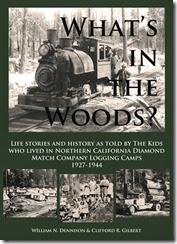 Local history buffs can rejoice in the publication of "What's In The Woods?" by William "Bill" Dennison and Clifford "Blackie" Gilbert ($35 in hardcover from the Butte Meadows-Jonesville Community Association). Checks for $40 (which includes $5 in shipping), made out to BMJCA, can be sent to 20 Lakewood Way, Chico, CA 95926; reach Dennison at (530) 258-1489 or 33dennison@gmail.com.

The subtitle fills in the details: "Life Stories And Histories As Told By The Kids Who Lived In Northern California Diamond Match Company Logging Camps 1927-1944." "The Kids" are six lifelong friends, Dennison, Gilbert, Jackie Chandler Abell, Stanley "Stan" Brock, Pat Schulse Gein, and June Beavers Yount. The co-authors "were raised in simple logging cabins just across the dusty road from each other in the West Branch Camp. Their lives and friendships have been interwoven for over 79 years."

The book itself is beautifully, elegantly designed. It includes a logging glossary, 142 historic photographs, and maps by Chris Ficken. The remembrances, set within the context of Diamond's experience in Northern California, center on "The Woods." The term "is still used in the forest products industry to denote the logging operation locations. Our homes were in very remote areas and surrounded by The Woods." It was a place of danger where their fathers worked, but "as we reached the ages of eight or nine, our parents were comfortable with us exploring and hiking outside the camp borders ... one had to be there in order to feel the security and trust that many of us developed between each other and The Woods."

The larger purpose of the book, Dennison told me in an email, is "to let the reader sit back and 'feel' The Kids' stories about the logging communities which formed their basic life foundation. The sounds of steam locomotive engines and bells, the school house bell, the water running in the streams in our backyards, abundant wildlife, the smells of summer flowers, as well as the dust from the camp roads and the tragedy of severe injuries/deaths and wildfires were all part of our early lives, which we wish to share with others. ... Life was hard, but The Kids recall fondly that our lives in the logging camps were good...very good." And so is the book.

Seeing Genesis through the eyes of Qabalah

Chico author Glynda-Lee Hoffmann recounts her quest for self-knowledge in "The Genesis Code: Your Key To Unlocking Hidden Genius" ($12.95 in paperback from CreateSpace; also available in Amazon Kindle e-book format). Hers was a difficult childhood; "in my forties," she writes, looking back, "I underwent three years of therapy and finally realized that the punishment I endured from my parents and teachers most likely had nothing to do with me. ..."

Those experiences left her lonely, bereft of love; though, mysteriously, there were also moments (a Voice; a vision of being inside the mind of Jesus) that left her with a yearning for "clarity": "Clarity is salvation." She forgot these experiences (only to recover them later). Then, in her twenties, she was given given a book, by French author Carlo Suares, which used the Qabalah to interpret Genesis. She was hooked.

An author interview is scheduled for this Friday at 10:00 a.m. on Nancy's Bookshelf, on KCHO (Northstate Public Radio, 91.7 FM).

The Qabalah is an ancient mystical tradition that sees deep meaning in each Hebrew letter. The first, ALEPH, "is the undetectable pulse of life." The second, BAYT, "is the static container which forms a boundary or perimeter which contains life." ALEPH is inner, BAYT outer. Each word of Genesis is a kind of acronym embodying the qualities of its letters.

Creation in Genesis is an outer story, the past. But the garden is an inner story, the present, the story of self-awareness and the presence of light. "I can't call it God since that implies separation. I am God, so the God that saves me is the energy that is me. ... The Qabalah recognizes that life is the only truth that exists. Life, not God, is our source." For Hoffmann, this was the moment of clarity. Eden is "a portrayal of our inner, psychological and neurological world."

Adam, in this inner story, is the neocortex and Eve is "the frontal lobe" which "emerged last in the human brain, extracted from the tissue of the neocortex, yet expressing new qualities, possibilities, and opportunities for human awareness, vision, and perception." YHWH is inner and outer intercommunication, "a process, not a deity, not the Lord."

It's amazing what the human imagination can find within the text.

A new Brett Raven adventure from a Chico author 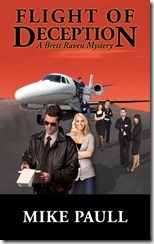 Mike Paull, pilot and retired dentist, created in Brett Raven a brainy, handsome dentist who is also a pilot. His first outing came in "Flight of Betrayal" and now, hard on its heels, we have "Flight of Deception" ($15.99 in paperback from Skyhawk Publishing; also available as an Amazon Kindle e-book), billed as "the second in the Brett Raven trilogy."

The first two books form a continuous story, and though new readers can start with book two (the shenanigans in book one are recounted within the first forty pages), it's best to start with "Flight of Betrayal" for the full effect. "Flight of Deception" is a story of sweet revenge, with Raven and former wife Annie going to great lengths to recover millions of dollars and put things right.

Paull will be signing copies of his books at a wine and cheese reception at Canyon Oaks Country Club in Chico on Thursday, September 19, from 5:30-6:30 p.m. The event is open to the public.

The story takes place in 2000, and Raven and his ex-wife Annie are seeing a lot of each other. Brett is in love and wants to marry Annie, but the relationship is "complicated." "Are the issues you're dealing with still related to when I talked you into the abortion?" Brett asks.

Annie: "Brett, I've already forgiven you for that. I just have to be sure I've forgiven myself. I keep thinking about the plans we made twenty years ago when we were in college ... but now that I'm in my forties and living with the realization I can never have children. ... I want to solve my own problems. Our relationship will never be right if I let you solve all the problems, make all the decisions, and I just come along for the ride."

And it's quite a ride, as Brett enlists the help of some key acquaintances to spin a web to catch a bad guy. Brett rarely makes a mistake, and part of the fun of the book is watching his elaborate plot unfold like clockwork (though Annie may have upset the best laid plans). No dental forensics this time, but plenty of fawning over a "twin engine Beechcraft Baron." Or, in Brett's words: "Pretty sweet."

Prolific Chico writer and photographer Doug Keister went to Paris--to study its cemeteries. He got an Eiffel! (Gustave Eiffel is buried in the Levallois-Perret Cemetery, a towering figure indeed--whose mausoleum is “out of alignment with the other tombs in the cemetery” so Gustave could face his masterpiece.)

The result of Keister’s study, aided by a number of dedicated taphophiles (“lovers of cemeteries”), is rather, shall we say, monumental. “Stories In Stone Paris: A Field Guide To Paris Cemeteries and Their Residents” ($24.99 in hardcover from Gibbs Smith, Publisher) includes hundreds of color photographs detailing cemetery symbolism, architecture, and cemeteries themselves.

Though designed as a guidebook (including GPS coordinates) for those touring the monuments, Keister’s eye for detail and the telling tale will keep armchair travelers engrossed as well. Tidbits abound. “A word,” he writes, “about the permanence of burial in Paris--Americans are often shocked to find that, unlike in America, where burial is permanent, burial in much of Europe is often a temporary affair.” In fact, “many graves are essentially rented for various periods of time.”

Jim Morrison’s grave in Père-Lachaise (he the “lead singer for the late 1960s/early 1970s rock group the Doors” who “visited Paris in March 1971 and never left”) was almost given to someone else in 2001 after the rental period expired but, fortunately for fans, he’s still there.

Marcel Proust is there as well, but Napoléon is in Les Invalides (“a rambling complex of buildings relating to France’s military history”), born “in Corsica, the second of eight children of noble Genoese parents.” Asked if he could conquer Europe, he was said to have said, Corsican! (Well, not really, but I couldn’t resist.)

From dogged puns to a true dog cemetery: “The Paris Dog Cemetery, which bills itself as the world’s oldest public pet cemetery,” was established in 1899. Know who’s there? Rin Tin Tin. Rinty died in 1932 but helped popularize “the German shepherd breed in the United States.”

Then there’s Saint-Denis, where lies Marie-Antoinette, who didn’t quite say “let them eat cake.” The word was actually “brioche,” “a type of egg and butter bread," still unkind words to starving citizens. Only, "there is no evidence whatsoever that Marie-Antoinette ever uttered those now infamous words."