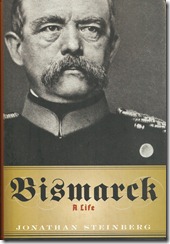 Who is Otto von Bismarck? As Prussian Prime Minister in the last half of the nineteenth century, he unified Germany and established the German Empire. When he died, in 1898, his son Herbert wrote that "I have lost the ... most splendid and noblest spirit in the world." Others did not have such salutary thoughts. Bismarck was ruthless, devilish even, a man given to rage--and a political genius.

"The real Bismarck," writes Jonathan Steinberg in an extraordinary new biography, "was a complex character: a hypochondriac with the constitution of an ox, a brutal tyrant who could easily shed tears, a convert to an extreme form of evangelical Protestantism, who secularized schools and introduced civil divorce." Steinberg's stated aim is to understand Bismarck by listening to his friends and his enemies, and to what Bismarck, in voluminous writings, had to say about himself.

The result is "Bismarck: A Life" ($34.95 in hardcover from Oxford University Press; $9.99 in Amazon Kindle and $14.97 in Barnes &amp; Noble Nook e-book formats). Henry Kissinger, writing for the New York Times Book Review, called it "the best study of its subject in the English language."

Steinberg, Professor of Modern European History at the University of Pennsylvania, is in Chico for a short stay and will be signing books and talking about Bismarck at the Chico Barnes and Noble Store this coming Saturday, April 30, from 3:00 - 5:00 p.m.

Steinberg's work is large, like Bismarck's personality, but accessible and compelling. His curiosity about this man drives him onward and the reader is swept into a Europe that became the "ready room" for two world wars.

Bismarck "held office for twenty-eight years and transformed his world more completely than anybody in Europe during the nineteenth century with the exception of Napoleon, who was an Emperor and a General. Bismarck did it while being neither the one nor the other. ... He ruled Germany by making himself indispensable to a decent, kindly old man, who happened to be a king. ... His rule depended absolutely on the bond between William I and his chief minister and on nothing else." ... "With perfect justice, in August 1866, he pounded his fist on his desk and cried, 'I have beaten them all! All!'" 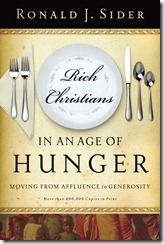 As Christians look ahead to Easter, and the celebration of Jesus' resurrection, theologian Ron Sider asks some pointed questions: "What will Christians do in this time of swelling affluence and persistent poverty? Will we dare to remember that the God we worship tells us that 'whoever is kind to the poor lends to the LORD' (Prov. 19:17 NRSV)? Will Christians have the courage to seek justice for the poor, even if that means disapproval by affluent neighbors? Where will you and I stand?"

Sider is the author of "Rich Christians In An Age of Hunger: Moving From Affluence to Generosity" ($15.99 in paperback from Thomas Nelson Publishers; Amazon Kindle e-book $6.94; Barnes & Noble Nook e-book $9.99), now in its 5th edition (2005). First published in the late 1970s, the new edition notes that fewer in growing Asian economies are living in poverty. Still, worldwide, "more than a billion desperate neighbors live in wrenching poverty." Sider issues a clarion call for Christians to respond, not only in adopting a simpler lifestyle (and laughing at TV commercials) but in doing something that might change unjust social or political structures that prevent the poor from acquiring property.

Sider, founder of Evangelicals for Social Action, is Professor of Theology, Holistic Ministry and Public Policy at Palmer Seminary of Eastern University in Pennsylvania. His book is divided into four parts. The first looks at the economic realities of world poverty; the second presents "a Biblical perspective on the poor and possessions"; the third explores poverty's causes; the fourth offers practical advice (from implementing a "graduated tithe" and building Christian community to "correcting weaknesses in market economies" and "reducing unmanageable debt").

By turns controversial and convicting, Sider is optimistic about how God might work through his people today. "In obedience to our Lord, we could empower the poor through small loans, community development, and better societal systems. And in the process, we would learn again His paradoxical truth that true happiness flows from generosity."

West Sacramento poet's posthumous collection to be celebrated in Chico 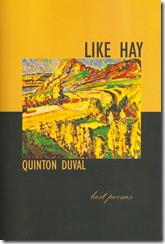 Quinton Duval loved the Delta region. He and his wife Nancy made their home there until his untimely death at 61 a year ago. "In the breeze," the poet writes, "I sometimes smell the sea. . . . She lies / back--picnic basket, blanket under /cottonwood, a day when clouds slow / to see her shining there. Good Lord, / thank you for the chicken, the cold / wine, the river coming down from / its source. Thank you for lips, a tongue, / and some imagination. For finger- / tips and skin warmed by sunlight. / Thank you for the sea, for what the river / discovers at its end, what waits / for all of us to come calling." ("Oceanic")

Duval was a creative writing instructor at Solano Community College and founded chapbook publisher Red Wing Press. His friend, poet Gary Thompson (who taught writing at Chico State University), worked with Duval in the last days of his life to bring together "Like Hay: Last Poems" ($16 in paperback from Chico's Bear Star Press).

Thompson will be reading from Duval's poetry, and from his own new collection, "To the Archaeologist Who Finds Us," at a book release celebration at Lyon Books in Chico, Wednesday, April 13 at 7:00 p.m.

Duval's poems are clear-minded and poignant. "They smell like hay to me, / your last sweet words / blown across the fields / of the bedroom and out / the window to join the real breeze / moving the trees and changing / May light from green to gold." ("Like Hay") "I am sixty and changing too, / my dreams filled with sea- / water and flickering fires on some shore." ("Late Summer") "Some of us cry in joy, relief, / in the thin clear stream of music / the body gives willingly away / as it collapses, exhausted, into dust." ("Red Memory")

"The Boy Who Harnessed the Wind," William Kamkwamba, is scheduled to speak Thursday, April 14 at Laxson Auditorium as part of the "Book in Common" program (www.butte.edu/bic or www.csuchico.edu/bic). My review is available on this blog. Ticket prices range from $10 for students and children to $20 for premium; for details, go to chicoperformances.com.