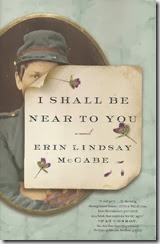 Young Jeremiah Wakefield joins the Union Army from New York farming country in 1862. His new wife, eighteen-year-old Rosetta, "independent as a hog on ice," follows him into the 97th New York State Volunteers, Company H, dressed as "Ross Stone." That's not what Jeremiah planned; he envisioned a quick end to the Civil War and the pay he would receive enough to buy a farm when he returned to Rosetta.

But she would never be a simple housekeeper. Once Jeremiah's shock of recognition subsides as Stone is introduced into the company, he offers a place in his tent to the new recruit. Some of their friends from Flat Creek are there as well, but soon lighthearted jibes and days of tedium give way to battle. Narrated by Rosetta, "I Shall Be Near To You" ($24 in hardcover from Crown; also for Amazon Kindle) by Erin Lindsay McCabe marks the debut of a compelling talent.

McCabe earned a teaching credential at Chico State University and has taught composition at Butte College. In an author's note she says that "the fictional Rosetta's experience as a soldier is an amalgamation of the experiences of the more than two hundred women who are known to have enlisted. ... Many women joined up to be with fiances, husbands, brothers, fathers. Not only did these women manage to pass the Army's physical exam (often just a handshake), some of these women even managed to conceal their identity until the very moment they delivered their babies in the ranks. ..."

McCabe's story is shattering, bringing the reader into the midst of war, confusion reigning, the smells of dying, the sights, even the taste, but most especially the sounds. The sounds of Rosetta's own thoughts, the din of battle, the screams of pain. "Sergeant bellows, 'Fire at will!' through the noise, but all I can do is keep low. ... I don't know where any of my boys are, but I have got to do this thing. I get to my knees and then it is time it is time it is time to make my run across moldering logs and branches and dead leaves and men." Heartbreaking and unforgettable.

McCabe will be signing copies of her book Thursday at 7:00 p.m. at Lyon Books in Chico. 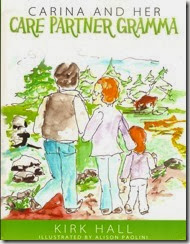 Paradise artist Alison Paolini, a member of the Parkinson's Association of Northern California, has teamed with Denver-based writer Kirk Hall to tell about his life as a PWP ("person with Parkinson's") from a child's perspective. The "grampa" of his earlier book, "Carson And His Shaky Paws Grampa" (also illustrated by Paolini), Hall's new story focuses on his wife, Linda, the caregiver, and is more explicitly about Parkinson's Disease.

"Carina And Her Care Partner Gramma" ($15.95 in paperback from Innovo Publishing, in Amazon Kindle format and available from Hall's website at shakypawsgrampa.blogspot.com) situates Parkinson's within a family context. As Hall says in a "note to readers," the book "emphasizes the importance of care partners. Care partners are most often women (since the majority of PWPs are men), but there are also women, family members, or friends in this difficult and demanding role."

"My name is Carina," the story begins, "and I am six and one-half years old." She and her younger brother have moved to China with their parents, who are teachers. She fondly remembers her grandparents, especially Gramma. "The summer before we moved to China, the whole family went to a park to walk with Gramma and Grampa and a bunch of other people. Some walked very slowly, some were in special chairs with wheels, and some were shaky like Grampa used to be. We walked a really long way to help raise money for something called Parkinson's. Gramma told us that is what caused Grampa's 'shaky paws' and make him tired."

Carina says her grandparents speak to others about Parkinson's, and her Gramma tells how she helps Grampa. "Like telling him to take a nap when he gets grouchy or taking a long walk with him. They told them about his special procedure and how much better he feels."

That procedure, Hall explains in a note, is called "deep-brain stimulation therapy," "a pacemaker for the brain," which he had in 2011. The book also includes a resource page for care partners and those with Parkinson's. Paolini's large, colorful illustrations are friendly and inviting.

"I would like to be a doctor," Corina tells her teacher, "so I can take care of people like how Gramma takes care of Grampa. ... I know she will do a good job because she loves him so much!"

A Chicoan's adventures building houses for the poor 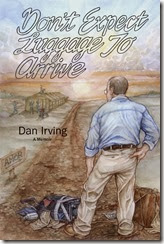 In 2009 the Evangelical Free Church of Chico teamed with long-time missions partner Amor (amor.org) "to build Amor experimental homes in South Africa." It fell to church member Dan Irving to organize the trip, recounted in "Don't Expect Luggage To Arrive" ($15 in paperback from Memoir Books; also for Amazon Kindle). It's available locally at Lyon Books in Chico.

The story also reaches back into Irving's growing up years and the intertwining of the work of another missions organization through a friend of a friend who knew the British Queen Mother. Irving's story is one of God's working in mysterious ways, of seeming coincidences and even setbacks that strengthened his own faith.

"Amor Ministries," he writes, "was founded by Scott and Gayla Congdon who fell in love when they started building an orphanage in Mexico in 1980." Amor, based in San Diego, "has grown from building the orphanage into building homes for the poor, which helps keep families together in Mexico, South Africa, and on an Apache Indian Reservation in Arizona."

In 2005 he was in Mexico with his son, David, and a team of volunteers to build seven houses through Amor. "We had three-and-a-half days ... from start to finish. Three-and-a-half days with lots of helping young hands, many who have never held a hammer, pounded a nail, cut a piece of wood, mixed or poured concrete; helping hands who were willing and soon would be able." In the end, all seven houses were completed despite "sleet, rain, heat, and hurricane force winds!"

Amor houses go to the poorest of the poor. Instead of living in "shelters" ("constructed of discarded scrap metal, corrugated iron, shredded pieces of plywood, tires, rocks, broken pieces of cement, hubcaps, and cardboard"), children are united with their families.

In expanding the work of Amor to South Africa for the first time, Irving assembled a Chico group of 26, including EV Free pastor Lou Diaz, Irving's family, students, medical and fire personnel, and even "the chairman of the board of Lundberg Farms."

Flying Delta, the volunteers arrived in Johannesburg but their 52 pieces of luggage? They went missing. (So the first letters of the book's title spell "Delta.") What happened next, though, is part of the story of God's grace.

Dan Irving will be the interview guest on Nancy’s Bookshelf, with Nancy Wiegman, Friday, January 24, from 10:00 – 10:30 a.m. Pacific Time, on KCHO (Northstate Public Radio), 91.7 FM. There’s a link to interview archives on this blog.

Will the family farm survive? 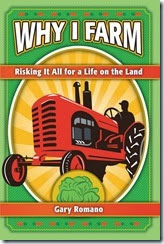 Gary Romano, his wife, Kim and son, Joey, own and operate Sierra Valley Farms (sierravalleyfarms.com) in Beckwourth, on the Middle Fork of the Feather River, in Plumas County. Certified organic, the 65-acre family farm, according to its Website, "hosts the only on-farm Certified Farmers Market in California." Innovations also include the summer "dinner in the barn series" and a CSA ("community-supported agriculture") program for restaurants.

But family farming is a struggle, and though Romano himself comes from generations of farmers, fewer and fewer Americans count farming as a family heritage. Romano argues that the US farm system is allied against small farmers, making a spirited case in "Why I Farm: Risking It All For A Life On The Land" ($15 in paperback from Bona Fide Books; also for Amazon Kindle). At times raucus (pretty raw emotions, and there's cussing), the book mixes family memoir with a plea for change (cultural, financial, legal) to help the small farmer survive.

What shines through is Romano's passion for the soil, and for honoring the family farmer. "So as we positively change our image," he writes, "how are we going to get people to like dirt? This is a hard one. The American public is so paranoid about germs. They are all about sanitizing everything! People need to go back to the earth, where all life begins and ends. Don't fight it! A little dirt under the fingernails is just fine. I don't know anyone who has died from eating a mouthful of organic soil."

Romano's book is a compelling read, tell-it-like-it-is honest about his own struggles to sustain a farm. "The old-timers say, 'All you have in Sierra Valley is July and winter.'" So, for Romano, diversification is in order, and even a little humor creeps in in his "Farmercise" suggestion, "fresh air exercise clubs" where "you can work your biceps and your quads by moving irrigation pipes...." An Appendix lists ten ways to "sustain the family farm in the twenty-first century."

Why does Romano farm? "I've worked a lot of jobs in my life," says the Chico State University grad, "from sales to a garbage man, a park ranger, and a cushy park superintendent job in Lake Tahoe. I must say that in the end I was born to farm."