New Testament scholar on the meaning of Jesus 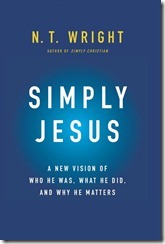 "Mary treasured all these words," Luke's Gospel says, "and pondered them in her heart." There is much to think about. For N.T. Wright, Chair of New Testament and Early Christianity at the University of St. Andrews in Scotland, Jesus was born into a "perfect storm" in the Middle East.

The "gale of Rome" heralded Caesar as "Lord"; the high-pressure national hopes of Israel told of God's people triumphing over their oppressors; and the "hurricane of God" "cut clean against the national narrative": "God called Israel, so that through Israel he might redeem the world; but Israel itself needs redeeming as well."

Wright tells the story of these storm systems colliding in the life of Jesus Christ. In lucid, though-provoking chapters, he ponders the meaning of the Gospel narratives of his life, death, resurrection, and ascension. "Simply Jesus: A New Vision of Who He Was, What He Did, and Why He Matters" ($24.99 in hardcover from HarperOne; digital editions for Amazon Kindle; Barnes and Noble Nook; and from Google e-books) focuses on what Wright calls the "New Exodus."

If the Exodus story told of the liberation of the children of Israel from a tyrant and a new vocation of being a blessing to all the nations (though that didn't quite work out), the New Exodus is about Jesus himself completing God's project.

"The presence of Israel’s God would be the presence of Jesus himself, coming to Jerusalem as the embodiment of Israel’s returning God, the fulfillment of Isaiah 40 and 52. This, Jesus believed, is what it would look like when Israel’s God came back to Zion. It would not be ... the pillar of cloud and fire ... but a young man on a donkey, in tears, announcing God’s judgment on the city and Temple that stood on the cosmic fault lines, establishing his own still incomprehending followers as its surprising replacement, and then going off to take upon himself the full weight of evil, the concentrated calamity of the cosmos, so that its force would be annulled and the new world would be born" in the resurrection.

Our human vocation, says Wright, is what Luke means by "witness": “tell someone else that Jesus is the world’s true Lord.”

Go tell it on the mountain.

If cars could talk: A fictional memoir from a Chico State University grad 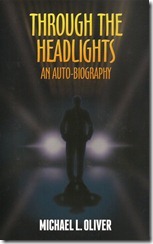 Michael L. Oliver lives in the Napa valley with his wife, Barbara, where he grows wine grapes in his retirement. He has deep ties to Chico State University as well as with a succession of cars which seemed to mark phases in his life. What if those vehicles could talk and give their own perspective? In Oliver's new book, seventeen of them do.

"Through the Headlights: An Auto-Biography" ($20 in paperback from Henway Publishing, www.HenwayPublishing.com) is an inventive romp through the minds of an AMC Rambler, a Porsche Carrera 2 Cabriolet, a VW Bug, and fourteen others, all owned by the central character, "Leroy." Coincidentally, Oliver's first car, and Leroy's first car, were both 1931 Model A Fords. Cars, Oliver writes in a Foreword, all have their own "personalities, quirks and needs which they make known to us." Listen to you car.

The Model A found itself in Chester in 1956, having first been purchased back in Oklahoma for $750. But after a succession of owners, the car came into the possession of young teenager named Leroy, not legally old enough to drive, but who's counting? Leroy was a delivery boy, but one frosty day the Model A took a spin right into a snowbank. No one was hurt, but, writes Model A, "One of many flaws with teenage boys is that they tend to worry about their consarned image when they ought to be worried about their mortality." Leroy will meet Model A again many years later.

Then, in 1960, came the 1955 VW sedan. In Chico, at the frat house parking lot filled with cars, the sedan writes, "I was the only German car around. A few of them made fun of my accent, and pretty much all of them thought I was odd looking. I could sense it. And when they learned that I had only 36 horsepower it caused a few headlights to rise."

Cars follow Leroy throughout his life. In an Epilogue, Leroy is lying sedated in the hospital, the victim of a heart attack. All of his cars return and there is deep conversation about life, purpose, and, mostly, death.

One can learn a lot from a car if one doesn't blow a gasket. 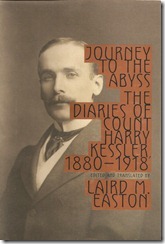 Laird Easton, Chair of the Chico State University History Department, has completed the monumental task of editing and translating a long-lost portion of one of the greatest diaries ever written. (Samuel Pepys, step aside.) "Journey To The Abyss: The Diaries of Count Harry Kessler, 1880-1918" ($45 from Knopf; also in digital formats for Amazon Kindle, Barnes and Noble Nook, and from Google eBooks) is the compelling story, in his own words, of a cosmopolitan German free spirit who became a secret agent.

Kessler's journal, which he added to over fifty-six years, opens up a "life led at the center of European art, literature, and politics during the greatest cultural and political transformations in modern history." But, as Easton notes, the section of his diary Kessler began in 1880, when he was twelve, through the First World War, was lost until 1983 when it was found in a safe on the island of Mallorca. Easton's work is the first English translation which, at 900 printed pages, is only a quarter of what Kessler produced during those years.

He was ambivalent, says Easton, about his homosexuality; even in his journal "he tiptoes around the subject of his own sexual feelings. ..." His father was a banker but Kessler was drawn to the avant-garde, influenced by Nietzsche (whose death mask he made), working with Richard Strauss, Igor Stravinsky, Sergei Diaghilev, Vaslav Nijinsky, Auguste Rodin, and lunching with George Bernard Shaw.

In San Francisco, 1892: "On the way through Golden Gate Park; wide boulevards shaded by pines, colorful flowers, tropical plants. I would have enjoyed their beauty more without the signs with endless Latin names stuck between them." Berlin, 1897: "Unfortunately I am once again drawn more and more into social life. Result, work = zero." Bern, Oct. 5, 1918: "The blackest day of the world war. ... The war is lost by our own confession."

Kessler survived (he died in 1937). Easton's work will survive, too; it is scholarly yet grandly accessible, inviting one to lose oneself in the "Belle Époque," that grand time before the abyss. 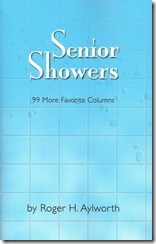 Roger Aylworth is the contact-wearing, keen-of-hearing, direction-challenged, sentimental, long-time ER reporter married four decades to the saintly Susan. For many years his weekly humor column, filled with family foibles and gentle wit, has graced this paper, and now, for the holidays, there's a new collection of favorites.

"Senior Showers" ($16.95 in paperback from Delphi Books) gathers 99 columns, most from mid-2006 to mid-2010, arranged in broad categories like "on growing older," "computers and other mechanical carnage," "on being, or being with, Roger," and "widgets and grandwidgets." Here are true tales of the couple's seven children, their spouses, and most especially the grandkids on visits to Casa Aylworth (here's looking at you, 2-year-old Caleb!).

Aylworth will be reading from and signing copies of his new collection at Lyon Books in Chico this Thursday, December 8 at 7:00 p.m.

The book starts with the title essay, and Aylworth explains that he's not "advocating a group lathering" but rather something akin to wedding showers only on the other end of life. "I can see the invitation that would summon those who love me to my senior shower: 'Roger has registered at the "Golden Years Adult Care facility" where you can sign up to cover as many months of residency as you wish. An account has also been set up at Dr. Krutch Walker's hip replacement clinic for gifts of any size!'"

More practically, Aylworth details the effort required to put together the clan gathering called Aylapalooza III. It's expensive to find housing for nearly three dozen family members. "While as a group we might have filet mignon tastes," he notes, "we tend to have a Spam budget." Speaking of kids, Aylworth provides some helpful suggestions on creating "homegrown mythology": "My dear bride, the saintly Susan, and I told our seven widgets that the belly button was the place where the screw went in that holds on your posterior."

Here are manly-man stories (don't mess with "MAH TRUCK"!), the death of a washing machine ("It toils not," says Susan, "neither does it spin"), and sage advice: "Best way to plan for golden years: Ask kids for gold." And "Roger's words of wisdom" at the end includes an observation from son Paul: "There is always one more idiot than you planned for."