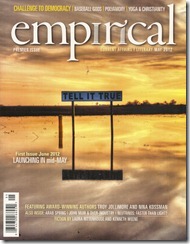 Tara Grover Smith and Olav Bryant Smith both teach at Butte College. Unbowed by the mountains of papers to grade, the couple has embarked on a new creative venture with stunning results. Together they have birthed a magazine, Empirical.

The first issue is now available at Lyon Books in Chico and soon in Barnes and Noble stores across the country, with a digital version at empiricalmag.com. Calling itself "a literary and current affairs magazine with the openness and pioneering spirit of the Pacific Northwest, Empirical aspires for truth by boldly introducing thought-provoking points of view and new paradigms."

For Olav, in introducing the magazine, the philosophers William James and Alfred North Whitehead are lodestars. Both "were committed to science and applying a sharply rational and logical intellect to the data of experience, but were both concerned that empiricism not be limited in its scope. Both sought to widen the range of investigation to include all aspects of life. James and Whitehead sought, for example, to include science and religion under the same umbrella of reasonable discourse."

And so the magazine opens its doors to the political, the spiritual, and the personal. The package is gorgeous, the writing clear, passionate, sometimes controversial, but also tinged with hope. There is hope even in Michael Coyle's featured piece on the Occupy movement. Coyle, who teaches political science at Chico State University, concludes that promises of "democracy" have instead left us "scared, scared, and weak." But perhaps change can come: "Our time is now, and it is time to take to the streets."

Or bake a cake. There is a recipe for "rich and squidgy chocolate cake"; a poem by Troy Jollimore; a hugely funny reflection on the baseball Cardinals by Randall Auxier; a moving short story by Kenneth Weene.

Local environmental ethicist Randy Larsen writes about a young John Muir dropped down a hole in a wooden bucket to help his father dig a well. Muir later looked back on his father's "vice of over-industry." For Muir, as Larsen writes in a kind of coda for the magazine, "There is an inspired life to be lived if we can brush off apathy and inertia, energize ourselves and each other, and allow Nature to remind us of callings above and beyond." 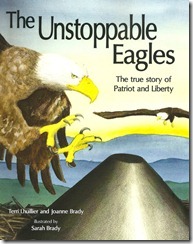 In 2004, with plans underway to replace the SR 44 bridge on the Sacramento River at Redding, a bald eagle pair established a nest in a nearby cottonwood tree. But "bald eagles use the same nest year after year" (the largest known nest, in Florida, may weigh three tons) and construction workers were concerned that their activity might result in abandoned eggs.

So in 2007 Fish and Game officials put a large plastic cone on top of the nest. But the eagles would not give up. "Word spread and people gathered," write sisters Terri Lhuillier and Joanne Brady. "The courage and tenacity displayed by the eagles inspired the community to protest the blocking of the nest. ... As for the eagles, instead of leaving, they began building a new nest." The remarkable tale is told in "The Unstoppable Eagles: The True Story of Patriot and Liberty" ($11.99 in paperback from Red Tail Publishing, redtail.com). The children's book is illustrated by Joanne's daughter, Sarah Brady.

Later in 2007 the cone is removed and a wildlife biologist monitors the nest. Bridge construction begins in 2008 but the eagles seem unfazed by the dust and noise. Liberty lays two eggs and that same year, an "eagle cam" is installed (at hancockwildlife.org). Three chicks come in 2009. The birds gained worldwide attention and they continue to nest in the area.

The authors are scheduled to be interviewed by Nancy Wiegman, host of Nancy's Bookshelf, this Friday, March 23 at 10:00 a.m. on KCHO (Northstate Public Radio, 91.7 FM). An archive of local author interviews is available at kchofm.podbean.com.

Both authors are educators; they provide not only vivid descriptions of the birds but, in an appendix, a section of "Critter Chit-Chatter" about eagles, a Patriot and Liberty timeline, and a glossary especially for kids.

"In early spring," they write, "while the nest tree swayed gently in the warm breeze, the first eaglet began to hatch. The chick cracked a small opening in the solid shell using the egg tooth on top of its beak and gradually worked it way out. Three days later, a second gray, fuzzy chick emerged. Liberty kept her young tucked safely beneath her while Patriot searched the river and ponds for food."

It's a great story from a talon-ted team.

New collection of short stories from a Chico writer 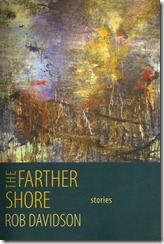 Rob Davidson teaches American literature and creative writing at Chico State University. Born in Duluth, Minnesota, he studied at Beloit College and Purdue University, then traveled to the Eastern Caribbean to serve with the U.S. Peace Corps. His new collection of short stories, "The Farther Shore" ($16 in paperback from Bear Star Press in Cohasset, bearstarpress.com), takes its inspiration from the sayings of the Buddha: "Go beyond / This way or that way, / To the farther shore / Where the world dissolves / And everything becomes clear."

The nine stories in the book, beautifully designed by Bear Star's Beth Spencer, bring their central characters to a place that threatens dissolution. They are stories of men and women sometimes willfully unaware of the darker undercurrents of domestic life until a moment arrives that changes, or threatens to change, everything. An unintended pregnancy, or an intended one with complications. A kid, facing a bully who is also his best friend. A college professor fearing a tenure decision at his school and in his marriage.

Lyon Books in Chico will be hosting a book signing this Thursday, March 15, at 7:00 p.m. An interview with the author, conducted by Nancy Wiegman for Nancy's Bookshelf on KCHO (Northstate Public Radio, 91.7 FM) is available at kchofm.podbean.com.

Some of the tales are set in Chico. In "Tell Me Where You Are," Charlie Peterson has rats eating through his house even as his marriage is unraveling. "He parked in front of the Presbyterian Church on First Street. He left Rachel sleeping in the locked van and stepped into the downtown city streets, damp with a light drizzle." His daughter is safe but his where is his wife?

The stories seem to grow darker, more complicated, with deep sexual currents, as the book progresses, concluding with "Criminals," which won the 2009 Camber Press Fiction award. Gerald Prescott Carter is an American living on the island of Carriacou, drinking heavily and working on a book about seashells, collecting rainwater in cisterns and terribly annoyed when a local boy, "Soup," attempts to steal some of the water. Carter is a deliciously unreliable narrator, concerned with his own sad dignity while life and death play out before him. Clarity? Here, not so much.

Tales out of Cuba 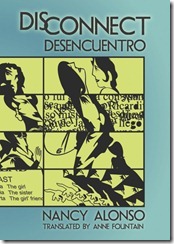 Begin with Sara Cooper, Professor of Spanish and Multicultural and Gender Studies, and Gender and Sexuality Pathway Coordinator, at Chico State University. In her travels to Cuba over the last ten years she became convinced that women writers there ought to have a voice in the larger literary world. In May 2010 she established Cubanabooks (www.csuchico.edu/cubanabooks), a non-profit small press dedicated to translating the work of contemporary Cuban women writers.

Now, Cubanabooks is celebrating the publication of a new bilingual collection of short stories, this time by Nancy Alonso. "Disconnect/Desencuentro" ($15.95 in paperback with a Kindle edition planned) is translated by Argentina-born Anne Fountain, Professor of Spanish at San Jose State University.

A book release party will be held from 3:00 - 6:00 p.m. Thursday, March 15 at Chico State University's Cross-Cultural Leadership Center. Free and open to the public, the reception will feature a visit by the translator, perhaps a taped reading by Alonso herself, and Cuban snacks.

The twelve stories in "Disconnect," as a note about the author says, run "the whole gamut of human relations including lesbian love, unconventional mother and son ties, chance encounters, interwoven destinies and even a dreamed death. Characteristic of Alonso's fiction is her creation of everyday scenes and dialogues that are universally understood yet deeply rooted in Cuban reality."

In "Anniversary," a group of former students from Havana's College Preparatory Institute, now living in Florida, put together a twenty-fifth reunion. There are smug self congratulations all around and they decide to contact another former student living in Cuba. "Although they might be separated by the longest ninety miles geographically speaking, they were also the shortest ninety miles." But it turns out the friend had organized a parallel reunion--and held it on the grounds of the Institute itself.

The final story gives the book its title. An older male professor writes a letter to one of his students, Leonardo, admitting that "I had fallen in love with you, a student who was twenty-five years younger than me, and I was incapable of confessing it to Pablo," his partner. "In order to lie to others--and I needed to do a lot of that--no method has proved more efficient than that of deceiving ourselves." Alonso is a chronicler of self-deception.