"The State Of Water: Understanding California's Most Precious Resource" 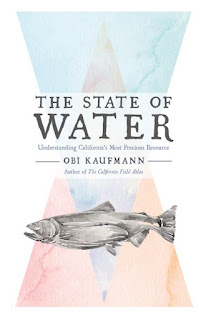 Oakland-based Obi Kaufmann is a kind of data-based poetic naturalist.

In his new book he offers a guide to "The State Of Water: Understanding California's Most Precious Resource" ($20 in hardcover from Heyday; also for Amazon Kindle). Replete with the author's own water colors of birds and beasts, and hand-painted maps of the state waterways, the book is a paean of praise to "Water, always the commodity, rarely the honored vehicle of all life."

He adds: "If genuine restoration is the goal, the solutions of conservation and efficiency are at
hand, reflected in our hearts that sing, have sung, and will always sing trust in this
place." He believes that common-sense conversation and technological measures can reduce California's yearly water usage from 40 million-acre-feet down to 30.

In other words, without building a single new dam (or enlarging Shasta), California would have not only enough water for its present population, but enough for decades to come.

"The aging dams are filling with silt," he writes, "and building more dams won’t
help. With less precipitation and already an excess of storage, they will never fill." We already have what we need.

"The Oroville Dam crisis of 2017," he notes, "was an excellent and terrifying example of the paramount need to inventory the readiness of the entire system. Instead of building new water projects, our money would be better spent repairing our existing system and even identifying projects that can go. ..."

Kaufmann calls "the bravest of all opportunities" the removal of the Hetch Hetchy reservoir in Yosemite National Park. He says that even without this storage, "San Francisco would still derive most of its water supply from the Tuolumne River. Constructing a new intertie at or below Don Pedro Reservoir would allow the city to have access to its supplies in the reservoir."

Then data yields to poetry: "I see a thousand cranes rise from the reservoir and on their wings, the valley empties. In the morning, the bears dream of their return with sapphire eyes uncut on salmon’s tooth." It is the freedom "of a restored landscape."

"We are Californians," he writes, and we love "a good challenge." 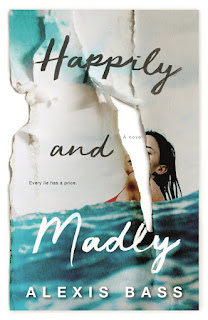 Chico novelist Alexis Bass introduces "bad girl" Maris Brown in her new YA novel, "Happily And Madly" ($17.99 in hardcover from Tor Teen; also for Amazon Kindle). I listened to the audio performance by Soneela Nankani; she captures in Maris' narration her bored cynicism with her dad's "new" family and her twitterpated emotions when she first meets the mysterious Finn. This is no ordinary summer.

Maris' father, George, a rep for Goodman Pharmaceuticals, has remarried. The "New Browns" are composed of George's wife Tricia ("A thirty-six-year-old who looks exactly her age, despite the new-mom short-bob haircut"), Trisha's eighteen-year-old daughter Chelsea (about the same age as Maris but utterly naive), and baby Phoebe (the "love child," Maris puts it).

Maris is invited to spend the summer with her dad and his family, immersing her in the moneyed life in Cross Cove on the New England coast. The "New Browns" are all smiles. Maris hardly fits. "I don’t look like them. I do not have a smile for every occasion. I do not glow. I am a daughter entirely by circumstance. Baggage from George’s first marriage. Nothing about me is beautiful or precious, and my shadow is the first thing you would notice."

Chelsea can hardly wait for the arrival of her London-based boyfriend, Edison, but meanwhile Maris, exploring the woods on a nearby island, encounters a young (and very handsome) man who calls himself Finn, wounded and trying to escape a trio of ruffians out for blood. It is all because of a poker match gone bad, with Finn losing and unable to pay up.

Maris' quick thinking saves Finn's life, and though she doesn't believe the story for long, she also realizes that Finn's presence makes her heart beat faster. She craves "mystery and excitement"--and Finn's kisses. Later, when Edison shows up for Chelsea, she sees immediately who he is and admits (surprise!) she wants him all to herself.

But this well-crafted and heartfelt novel is not just about a romantic triangle. Everyone seems to be lying (except Chelsea) and it turns out that murderous plots are afoot, with Edison--and George--deeply involved.

Love must persevere, because justice can be rough indeed. 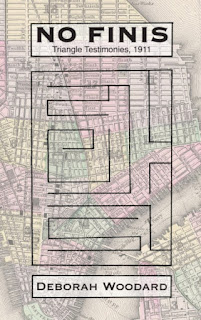 Woodard was drawn to an exhibition at New York University on the hundredth anniversary of the Triangle Shirtwaist Factory Fire, on March 25, 1911, in the Asch Building in New York City. The fire, she writes, "resulted in the deaths of 146 garment workers--mostly young women and mostly recent Eastern European and Italian immigrants."

The factory "occupied the top three floors of the building. Workers on the eighth floor (where smoke was first detected) and the tenth floor (with access to the roof) survived in almost every case. However, the ninth floor became a death trap." The small elevators stopped working and fire spread to escape routes. "Forced to choose between those engulfing flames and plunging to their deaths, scores of young workers leaped from the ninth-floor window ledges."

Fire fighters on the scene, their life nets broken, yelled to the workers not to jump. But they did, sometimes in groups of two or three.

"The Triangle Shirtwaist owners, Max Blanck and Isaac Harris were tried for the death of a single employee, Margaret Schwartz. The owners were acquitted, thanks in large part to defense attorney Max Steuer's canny and often brutal cross-examination of the witnesses, many of whom ... were forced to testify in English, and had to do their best not to get tripped up."

Woodard's poems are based in part on the trial transcript. The book also contains drawings by John Burgess illustrating the "claustrophobic workspace" and the burial sites, "strewn dots," of the victims.

Mr. Steuer asks Mary Domsky, "It is normal to look up once and awhile at the other girls when they pass, isn't it?/ It is if you don't get caught." Kate Alterman says to Steuer, "There was a wall of smoke. Probably I can make my escape, I thought. The Greene Street door was a curtain of flame, but I was as cool and collected as you are./ I am not half as cool as you think, Miss Alterman." Ridge-area novelist Brian Marshall has written a psychological coming-of-age story about life and death. "Choosing The Dark" (self-published, for Amazon Kindle) transports the reader to the early 80s in San Francisco. Punk is on the wane, hippie heaven a chimera, and a mysterious disease is taking lives in the gay community.

"Way back when, in Pleistocene times," the narrator remembers, "there were people who lived on the margins, people for whom having little, caring less, wasn’t an outcome, but a choice. A decision to live in the dark. To shout, and sneer, and flail away, burning at both ends. Love, as it turned out, wasn’t the answer, and so they’d tried something else. Something that tasted like Drano, and sounded like a scream."

This is the scene that attracts young Robert Walstein, finished with high school in Mill Valley, one of those "spoiled white kids from Marin," who yearns to escape the shadow of his mother Carol, a classical/modernist composer, from whom he is estranged.

In the first half of the novel, "Learning To Live," Rob hooks up with the mysterious Annie and becomes the drummer for a band headed by Kurt, whose song lyrics are "crazy, nonsensical, completely left-field, but totally, totally right. Spilling from Kurt in this deep baritone, the sob of some lost soul. He is singing from hell, Rob suddenly knows. The place that he calls home."

The second half, "Learning To Die," is dominated by Sol Myers, an older gay man who becomes Rob's mentor, his guide to coping with death (ominously, Carol is diagnosed with breast cancer), who finds in Rob a kind of naive passion needing to embrace the truth about human mortality.

Rob feels ashamed of the one-time "raunchy, burlesque Marx Brothers number" that he dances with Sol, but he "knows instead that it’s Life. Dragging him round the dance floor. Wringing his body dry. Letting him know that, yes, he will die, but in the meantime there is this. A moment between being born and being buried. Don’t blink or you’ll miss it, fool."

Family reconciliation is possible, Marshall says in this deeply probing novel, but the cost may be beyond what you can imagine.