Solution to our garbage problem? It's in the bag 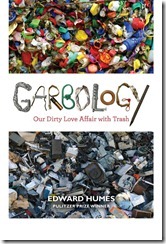 Edward Humes is a California-based, Pulitzer Prize-winning journalist who has turned his attention to the stuff we throw away. "Garbology: Our Dirty Love Affair With Trash" ($27 in hardcover from Avery/Penguin; e-book versions for the Amazon Kindle and Barnes and Noble Nook) is a fascinating and surprisingly upbeat look at how we got here, where trash goes when it's tossed, and how ordinary mortals can make a difference.

Where's "here"? Humes sums it up: "Americans make more trash than anyone else on the planet,throwing away about 7.1 pounds per person per day, 365 days a year. Across a lifetime that rate means, on average, we are each on track to generate 102 tons of trash."

What's more, "American's two highest volume exports to China were paper waste and scrap metal, a little more than $8 billion worth of bundled old newspapers, crushed cardboard, rusty steel and mashed beverage cans sold at rock-bottom prices. ... America, a country that once built things for the rest of the world, has transformed itself into China's trash compactor."

Humes is scheduled to be interviewed by Nancy Wiegman on Nancy's Bookshelf this Friday morning at 10:00 a.m. on KCHO (Northstate Public Radio, 91.7 FM).

Humes' research is driven by a key question: "How is it possible for people to create so much waste without intending to do so, or even realizing they are doing it?" He spends time at Southern California's Puente Hills landfill (the "largest active municipal dump in the country"), charts the history of Waste Management, Inc., and details the work of trash-trackers (who attach electronic beacons to thrown-out sneakers and plastic containers). "Managing waste" makes it seem to disappear. But it's still there, such as in the zillions of plastic nodules mixed into our beaches and populating the "Great Pacific Garbage Patch."

Humes devotes a chapter to Andy Keller, the head of ChicoBag, and Keller's legal fight with "Big Plastic." Plastic grocery bags "are mostly not recycled despite decades of efforts. ... Their environmental footprint and cost are greater than the simple expedient of a reusable bag. They are, as Andy Keller is quick to point out, a product with a useful life measured in hours and a waste life measured in centuries." 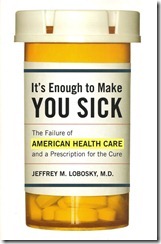 Dr. Jeffrey Lobosky, Co-Director of the Neurotrauma Intensive Care Unit at Enloe Medical Center, and Associate Clinical Professor in the Department of Neurological Surgery at UCSF, knows the U.S. health care system from the inside and it's not a pretty picture. After years of frustration, and spurred on by his wife, Diana, he's gone public with a must-read examination that leaves no one unscathed.

As he notes in the Prologue, "I will discuss the roles of the insurance industry, the pharmaceutical industry, for-profit hospitals and malpractice litigation in creating the prevailing mess. But I also hope to point out how the American business community, our current political system and their leaders, organized medicine, practicing physicians, and patients themselves hare culpability for our current state of affairs. No one group is fully to blame and no one group is fully blameless."

The details are spelled out in "It's Enough To Make You Sick: The Failure of American Health Care and a Prescription for the Cure" ($27 in hardcover from Rowman and Littlefield), a clear, sometimes wry conversation about the eroding relationship between physicians and their patients.

Dr. Lobosky will be speaking Tuesday at 7:00 p.m. at Lyon Books in Chico. An archived interview with the author on Nancy's Bookshelf with Nancy Wiegman (aired on KCHO Northstate Public Radio 9.17 FM Fridays at 10:00 a.m.) is at kchofm.podbean.com.

He notes a disturbing trend in the last decade in the growing use of "hospitalists," doctors whose full time practice is "within the confines of a hospital, admitting and caring for patients whose own doctors no longer provide those services or who are without primary care physicians. ... Care is handed off among members of the group as their 'shift' ends."

Dr. Lobosky charges $3808 for the emergency removal of a blood clot threatening the brain. "Medicaid pays me $1180 for that service. When you calculate the overhead (cost of malpractice insurance and office expenses to see the patients), I net $755 for a three-hour, middle-of-the-night lifesaving surgery, three to six weeks of ICU care, and three months of follow-up."

A psycho-sexual thriller from a local novelist 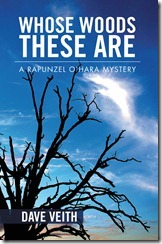 Consider the town of Estella. "Known for its beautiful surroundings and pleasant people, the Northern California town of Estella is a small but growing community on the banks of a tidal river north of San Francisco Bay." But the brochure, promoting the first "Jennifer Carpenter Days," doesn't end there. The town, and the river, are named after a young women who was raped 150 years ago and who drowned herself.

"Twenty-five years ago," it continues, "another young girl met a sinister end. On the cusp of 18, beautiful and naive in equal measure, Jennifer Carpenter vanished into a moonlit night in the hills northwest of town, leaving behind nothing but the uniform worn at St. Stephanie's Boarding School for Orphaned Girls: white blouse, blue-and-white checked skirt, serviceable socks, and clogs."

The disappearance provoked a media frenzy, and now the town is capitalizing on the mystery--and filling local coffers--with a parade and other festivities. A beautiful lawyer, Lisa Conda, is chosen to play Jennifer, complete with dark wig. A one-time lover of Roy S. Moby, a soft-porn svengali new to Estella who has opened a chain of family restaurants, Conda meets a horrible end in the same woods, in the same place, as Carpenter herself.

That's when 28-year-old Rapunzel Isabel O'Hara enters the picture. A freelance writer, she and Conda had become friends of sorts, though both had sought Moby's sexual favor. Rapunzel, intelligent, intuitive, a featured nude in Moby's magazine, comes to Estella to investigate. She discovers a hornet's nest of intrigue among the townspeople and in search of Lisa's killer uncovers truths long buried.

"Whose Woods These Are" ($23.99 in paperback from Xlibris; also available in Amazon Kindle and Barnes and Noble Nook e-book formats) by Dave Veith weaves a complex spell. He is scheduled to be interviewed by Nancy Wiegman on Nancy's Bookshelf at 10:00 a.m. this Friday, May 18 on KCHO (Northstate Public Radio, 91.7 FM).

A memoir in witty, poignant vignettes 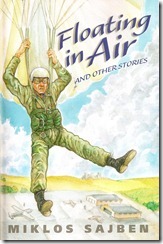 Local writer Miklos (Mike) Sajben was born in Hungary in 1931. "World War II affected us much like everybody else. We experienced shortages of almost everything and had the privilege of being bombed by both Americans and Germans." Mike escaped to the US in 1956, got his Ph.D. from MIT, became a citizen, and married an American named Mary.

His observations about growing up in Hungary and living in the US are captured in more than three dozen vignettes, now published as "Floating In Air: And Other Stories" ($20.49 in paperback from lulu.com). The author is scheduled for a book signing at Lyon Books in Chico in the near future; check the website (lyonbooks.com) for the latest news.

The title piece takes the author to the Valley Forge airport near Philadelphia for a try at parachute jumping. "The chute was supposed to open almost immediately, but nothing happened for a long long time. Thoughts of a future career as a pancake flashed through my mind."

In "Cat Calamity" Sajben remembers being a kid in Hungary during wartime watching his father get the mice out of the family's corn bin. Once the corn was removed what remained were "lots and lots of mice, maybe as many as a hundred, squeaking and running around on the solid bottom of the crate, giving the impression of a grey, velvety, shimmering carpet."

So Dad brings in Uncle Laszlo's cat, Max, and tosses him into the bin. "Max was frozen rigid in the stance he landed in. His tail stood straight up like a candlestick. He looked like a porcupine, his hair sticking out in all directions as if he were the subject of a high-voltage science experiment. ... Max let out a primal scream, bounded out of the box in a single jump and flew out of the barn." He "never caught a mouse again."

There are reflections on understanding women (don't try), eating pig intestines (yum!), and more, along with some salty language here and there. Speaking of language, while Hungarian "happily hums along with a single form of past tense ... English sports six of them. ... Why, oh why can't I deal with my pasts?" But if these "pasts" are any indication, Mike Sajben has a bright future.