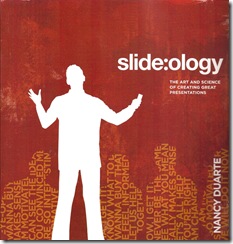 The speaker looks out at the assembled audience and, like magic, the first PowerPoint slide appears on the nearby screen. Seemingly enamored of each slide, the speaker turns and reads it to the audience. One slide features six main bullet points, each with three sub-points and, in the smallest of type, a scattering of sub-sub-points. Another slide features a detailed spreadsheet and the final slide simply says "Questions?" As if to underscore the point, the question-mark is pictured by the cheesiest of clip art mined from the bowels of Microsoft's PowerPoint library. The first question one thinks of is, "Why are you inflicting this on us?" The second question is: "What time is lunch?"

The problem, writes Nancy Duarte, is not that slide presentations are evil, but that they "all too often reflect the agenda of the presenter rather than build a connection with the audience." Rather than simply reading their slides, presenters need to put in "the effort necessary to transform them into visual stories that support their message." Duarte shows how. She calls for a new "slide ideology," "a meaningful relationship between you, your slides, and your audience." It's all expressed clearly and beautifully in "slide:ology: The Art and Science of Creating Great Presentations" ($34.99 in paperback from O'Reilly).

According to a note about the author, Duarte is "president and CEO of Duarte Design, one of the few agencies in the world that focuses solely on presentations, and in 2006 was responsible for the slides used in Al Gore’s Oscar-winning film, 'An Inconvenient Truth.' Though it’s based in Mountain View, Duarte Design (http://www.duartedesign.com) has an office in Chico."

The book is superb and immediately useful. It's not another how-to on PowerPoint, but rather a guide to "best practices" in the use of any presentation medium--even if it's just paper flip charts used by John Ortberg of Menlo Park Presbyterian Church. A slide that "contains more than 75 words is a document. . . . True presentations . . . reinforce the content visually rather than create distraction, allowing the audience to comfortably focus on both." For Duarte the process starts with creating "ideas, not slides," using the visual medium to "tell the truth" and "get to the point."

So does the book. 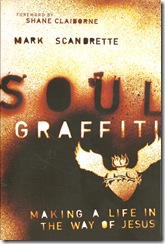 Mark Scandrette, the co-founder of ReIMAGINE ministry in San Francisco, brings readers into a gritty, street-level Christianity with "Soul Graffiti: Making a Life In The Way of Jesus" ($14.95 in paperback from Jossey-Bass). "No matter our aesthetics," he writes, "there is something in the motivation of the graffiti artist that we can identify with, a guttural yelp to be heard and understood, to talk back to the universe or to God when we feel helpless, abandoned, or overwhelmed." Being an apprentice to Jesus Christ means becoming, in one's very life, an authentic embodiment of the "good news" Jesus brought.

Scandrette, along with his wife and three children, live in the Mission District, and the stories he tells of street people, down-on-their-luck neighbors, and "respectable folk" are sometimes shocking, sometimes heart-breaking, always unsettling. For the author, the "emerging vision" of the church is more than just correct belief. "Our culture allows us to claim belief without validating faith by actions. Our use of the phrase 'I believe' could more accurately be substituted with 'I agree' or 'That makes sense to me' rather than 'I act on this information with fidelity and trust.'"

"Soul Graffiti" looks at the "school of conversion" in terms of Jesus as companion, artist, healer, and mystic (that is, one who is "conscious of the transcendent reality of God, accessing power to love through contemplative prayer, mindful surrender, and the practices of silence and solitude"). He adds that "in the experience of the early disciples, the power of Jesus' resurrection brought the spiritual metamorphosis required to inhabit the kingdom of love."

Finally, "entering the kingdom of God is a lot like learning to dance again. Somewhere in the deepest part of ourselves we have heard the music of our Maker and long to get our groove on. . . . We repent and reimagine how we live in our bodies, knowing that revolutionary force, the Spirit of God, is at work in us, wooing us toward health, wholeness, love, and peace." 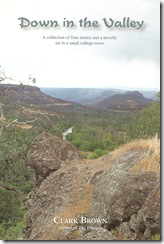 "Down in the Valley" ($11.95 in paperback from Stansbury Publishing) is billed as "a collection of four stories and a novella set in a small college town." For retired Chico State University English professor Clark Brown, the fictional "Yana City" "exists somewhere in the imagination, though the stories themselves take place loosely from the mid-1960s to the mid-1980s.

"Here now in Yana City," Brown writes in "Wilderness," about an English department fight at Yana State College, "you were aware of your surroundings all right--mountains and valley floor and the great slow river--and the sky, always, the sky--but the town seemed lost in space and time, as though it had drifted from its moorings or fled from its orbit. Really, it was like a secret village you stumbled upon in a fairytale, as astonishing little world going busily about its affairs, undiscovered and uncaring. Oh, but the heat!"

Brown will be braving the elements, signing books and reading from his collection tonight at Lyon Books in Chico at 7:00 p.m.

In "Cézanne's Fingers," the shortest of the pieces, Philip Moore has been deputized by his college department to ask American Studies prof Charlie Harris to leave the school after being caught passing off a student paper as his own. Charlie intertwines his hands. "'The painter Paul Cézanne,' he intoned, shucking off his gloves, 'used to link his fingers like this, to show how everything is locked together. You know?'"

"When Evildoers Come At Me" tells the tale of young Alan Maeghers, full time student at Yana State, who finds himself at the center of several affairs and a Religious Studies major to boot. "The advantage," he says, "of majoring in Religious Studies--'Rel Studs,' as the schedule has it--is that you can appear extremely sensitive without actually having to believe anything."

"A Thing Decided," the novella, is the gripping diary of one Harlan Fort, who discovers the previous tenant, Stephen Bard, had died under mysterious circumstances "the summer of '78." For Fort, "I meddle, therefore I am." The truth uncovered is unsettling, shocking even, though, Harlan muses, "isn't that what this whole adventure has been about--the unsuspected people within us?"

Brown evokes those "unsuspected people" within the reader as well. Meddler!

Chico pastor: The principles of jazz improvisation can change your life 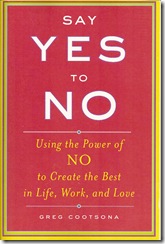 Greg Cootsona is not only Pastor of Adult Discipleship at Bidwell Presbyterian Church in Chico; he's also a drummer and jazz aficionado. "Jazz improvisation," he writes, "illustrates some keys to a successful life. First of all, say no to chaos: By mastering your instrument and knowing the changes. Say no to overplanning: Life is not fixed. You cannot predict every detail. Relax, stay loose, and take in what life gives. Finally, say yes to improvising a life of spontaneity, creativity, and beauty." One's highest calling is to say yes to God.

That means removing the obstacles, such as submersion in technology or work, that hinder our flourishing. You'll find no better guide than "Say Yes To No: Using the Power of NO to Create the Best in Life, Work, and Love" ($12.95 in paperback from Doubleday). The book is addressed especially to those who may not have a religious identification but who are spiritually open. It's for those caught up in the quest for wealth, fame, position but who long for a life of integrity.

Cootsona (http://www.gregcootsona.com) will be talking about his book and signing copies at Lyon Books in Chico tonight at 7:00 p.m.

As a young pastor at Fifth Avenue Presbyterian Church in New York City, the pressure of work and a series of family challenges began to affect his health. The chest pains, "a racing heart and shortness of breath, my head spinning with unfinished tasks at home and at work," led him, at age 38, into a doctor's care. That was in March 2001. Not many months later the church became a haven in the aftermath of 9/11. He realized the higher priorities in life required a series of nos to lesser ones.

Saying no, with grace and conviction, doesn't make one a negative person, but one who has the freedom to be "on the right road." That road includes Sabbath, the goal of which "is not idleness but a proper rhythm of work and rest." It's about finding the greatest yes of all.

"In Jesus," Cootsona writes, "I found the big yes to God. And that great yes now defines all my nos."

"Say Yes To No" is a practical companion to a vibrant, jazz improvisational life. 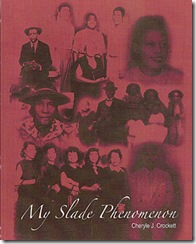 Dunnigan resident Cheryle J. Crockett writes that "it became my obsession" to understand her family heritage. "It is my belief that the hand of God led the way for me to see this remarkable phenomenon." Her book, "My Slade Phenomenon" ($9.00 in paperbck from Dorrance Publishing Company) traces her Irish, Choctaw, and African American ancestors. "Could my slave descendant Andrew (Slade) and Alex Haley's slave descendants have known each other? Quite possibly they did." This is a detective story, and Crockett details her research techniques in piecing together the many strands of her identity. Now, she says, she is content. 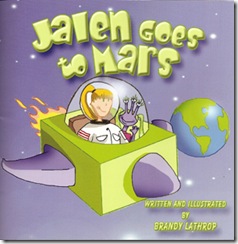 Brandy Lathrop of Chico has written a cool little children's book about a five-year-old girl who is reluctant to clean her room. "Jalen Goes To Mars" ($24.95 in paperback from www.PublishAmerican.com) features crayon drawings by the author. "Jalen looked at the aftermath of the phantom tornado that ripped through her room while she played dress up. Who knew such a mess could appear out of nowhere?" So Jalen climbs into her toy box and takes off for Mars. There she meets a three-eyed Martian girl and helps put away her space toys. "Mars was spotless." And so was Jalen's room! 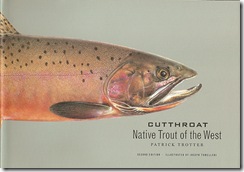 The second edition of "Cutthroat: Native Trout of the West" ($34.95 in hardcover from University of California Press) by Patrick Trotter is the definitive guide to an "increasingly rare native trout characterized by two streaks of red pigment under its jaws" (which gives the species its name). The fish "resides in streams and lakes of the Rocky Mountains, the Great Basin west, and the Pacific Northwest coast." Trotter, a Seattle writer and fisheries consultant, provides detailed history and habitat for each of 14 subspecies. Full-color diagrams, maps and photographs, and a mention of the Bartleson-Bidwell party, complete this remarkable volume.