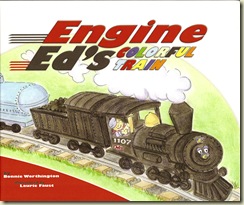 Chico's Bonnie Worthington dedicates her first children's book to her son, Cole, "my angel and my inspiration." A note about the author on her Web site says that "her son became enthralled with trains and remains a devoted enthusiast today. His first train ride was on the little steam engine number 12 of the Orland, Newville and Pacific Railway in Glenn County. By the time he was three, Bonnie was taking her son on trips to the California State Railroad Museum in Sacramento and going on tourist train trips all over North America. One thing they noticed was that there was a shortage of train story books for children, so Bonnie created the Engine Ed series of books for all little train enthusiasts and the adults who get to read to them."

The first in the series is "Engine Ed's Colorful Train" ($16.95 in hardcover from Bear Hug Books, available at www.engineed.com) with full-color illustrations by Laurie Faust. It's bedtime, and a little boy named Cole asks his mom to read his favorite story, the one about "Engine Ed." Cole drifts, but "when he opened his eyes, Cole was standing at the edge of an old walnut orchard and saw a big black steam engine on the tracks in front of him! It looked like it was smiling. 'Ding, ding, ding, ding,' rang the engine's big brass bell. . . ."

Cole finds himself "dressed in blue striped overalls, an engineer's cap, and there was a big red bandana around his neck." Engine Ed invites him on board. "'Well, wouldn't you know,' the big engine laughed, 'I've got Cole here in front of me and coal in my tender too and I can't get started without either one of them. Hurry up and climb aboard. I can't be late and I can't get going without an engineer!' puffed Ed impatiently."

On the ride Cole is introduced to a tank car, a boxcar, a flatcar, and an old fashioned caboose, and surprises Engine Ed with his knowledge of FRED. That, Cole explains, "stands for 'Flashing Red End-Device.' That's what trains use now instead of a caboose."

Youngsters will appreciate learning about trains through the simple yet engaging story, the stuff that dreams are made of. 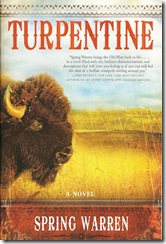 Start with the Nebraska plain in the year 1871. Add 17-year-old elite-born Edward Turrentine Bayard III, just off the train from Connecticut, sent by his doctor to a lung-clearing sanatorium that proves pretty much nonexistent. Season with a large dollop of Dickensian characters and Three Stooges spice, and one has the makings of a Western novel that more than just “hops along.” “Turpentine” ($14 in paperback from Black Cat) by Spring Warren is an imaginative delight from the Davis-based first-time novelist (there’s more at www.springwarren.com).

Spring Warren will be appearing at Lyon Books in Chico at 7:00 PM tonight for a public reading and book signing. Married to historian Louis Warren, the author spent her growing up days on a Wyoming Ranch, and writes in publicity material that “my great uncle, Roy Montgomery, ran a bar and bordello in Gillette, Wyoming, called the ‘Buffalo Hump.’ He was the Democratic favorite for the governorship of Wyoming when the Republican faction levied charges against him for violating the White Slave Traffic Act. He spent a year in Leavenworth and no time as Governor.”

Some of that sensibility finds its way into “Turpentine,” which is the moniker Edward (“Ned”) receives early on in Nebraska. Ned is naïve but thoughtful, and falls head over heels for Lill Martine, but a marriage is not to be. Later, on his way back to Connecticut to unravel family mysteries, he meets up with his old tutor, Brill, who asks Ned, “Forgive my lachrymose thoughts. . . . How are Avelina and Tilfert, the love of your life, Lill, and the scoundrel horse, Chin?” “Dead, drowned, lost, and abandoned. Lachrymose indeed.” And that’s not even the halfway point of the book.

Back East, Ned teams up with a teenage coal miner named Curley and a cigar roller named Phaegin, a woman who loves dancing and who eventually loves Ned. Their adventures are by turns laugh-out-loud funny and mordantly grim. Along the way there are more identity shifts than in a Shakespeare comedy. Much later there will be time for reflection on just who one is and recognition that “the end and the beginning are much the same. Eventually no one owns identity.”

Posted by Dan Barnett at 9:11 PM No comments:

Looking toward Easter and the hope of the Resurrection 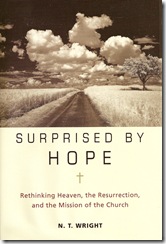 N. T. Wright is Bishop of Durham in the Church of England, but he’s also a prolific scholar and popular author of “Simply Christian.” His newest book is “Surprised by Hope: Rethinking Heaven, the Resurrection, and the Mission of the Church” ($24.95 in hardcover from HarperOne). It’s a bracing call for readers to understand how the early Christian hope, which was based on what Wright calls “the strange story of Easter,” gives guidance to the church today as it confronts a world of death, injustice, hopelessness.

Along the way Wright takes up two false hopes, the materialist “myth of progress” and a kind of modern Gnosticism that seeks to escape the material world into some ultimate disembodied existence. But the first cannot deal with real evil, and the second undermines human stewardship of God’s good creation.

By contrast, the Christian hope is far different. “The early Christian future hope centered firmly on resurrection. The first Christians did not simply believe in life after death; they virtually never spoke simply of going to heaven when they died. (As I have often said . . . heaven is important but it’s not the end of the world.) When they did speak of heaven as a postmortem destination, they seemed to regard this heavenly life as a temporary stage on the way to the eventual resurrection of the body.”

Easter is a “strange story,” Wright says, because the earliest Christian accounts of the bodily resurrection of Jesus conclude not with a hope of “going to heaven,” but rather with “a very this-worldly, present-age meaning: Jesus is raised, so God’s new creation has begun—and we, his followers, have a job to do!”

The resurrection is “life after life after death,” and so “the presently embodied life before death can at least be seen . . . not simply as a ‘vale of tears and soul-making’ through which we have to pass to a blessed and disembodied final state, but as the essential, vital time, place, and matter into which God’s future purposes have already broken in the resurrection of Jesus and in which those future purposes are now to be further anticipated through the mission of the church.”

Wright considers judgment, heaven and hell, the ascension of Jesus, and more. He offers corrective words for the church as he looks at implications of the resurrection for justice, beauty, evangelism, baptism, prayer, scripture reading holiness and love, and the promised future redemption of space, time, and matter. The hope that Easter offers may take the reader by surprise.

Posted by Dan Barnett at 9:10 PM No comments: 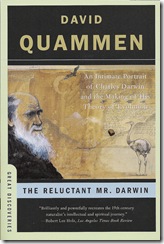 In March of 1837, some 171 years ago, Charles Darwin became an evolutionist. But, writes David Quammen in a new biography, Darwin “didn’t announce his apostasy” from the prevailing Anglican view that God had created each separate species as “natural kinds.” Darwin suffered most of his life with “chronic bad health,” but his distress was not the only reason he refrained from publishing his findings, in which he marshaled evidence of what he called the “transmutation of species” (only years later would he use the word “evolution”).

The story is told in “The Reluctant Mr. Darwin: An Intimate Portrait of Charles Darwin and the Making of His Theory of Evolution” ($14.95 in paperback from W. W. Norton) by David Quammen. The author has succeeded in his purpose of creating “a concise treatment, part narrative and part essay, accurate but pleasantly readable, of this huge and deeply complicated subject” and what he calls Darwin’s “difficult, scary materialism.”

Quammen is a National Geographic contributing writer, has won the National Magazine Award three times and has published 11 books, fact and fiction. He holds the Wallace Stegner Chair in Western American Studies at Montana State University. He will be appearing in a free public presentation next Tuesday, March 11 at Chico State University’s Laxson Auditorium as part of the On the Creek Lecture Series. Sponsored by Chico Performances (www.chicoperformances.com), the College of Natural Sciences and the Natural History Museum, Quammen’s lecture on Darwin begins at 7:30 p.m.; a book signing is scheduled afterward.

Though the lecture is free, tickets are required for admission. They are available at the University Box Office at 2nd and Normal Streets in Chico (898-6333).

Quammen writes that “Darwin was a complicated man . . . selfish and ruthless . . . in some ways, but selfish and ruthless mainly in service to his work. He was also sweet-spirited and dutiful, with a strong sense of personal morality grounded only in his materialistic notions of how human social behavior had evolved.” But for the threat of another naturalist, Alfred Russel Wallace, usurping his work, Darwin might not have published “On the Origin of Species” in 1859.

By then Darwin had identified the mechanism of species change—natural selection—and his idea altered the face of biology forever and spurred intense debate about its religious implications. Quammen writes, “The existence of God . . . is not what Darwin’s evolutionary theory challenges. What it challenges is the supposed godliness of Man. . . .” The discussion continues, 171 years later.

Posted by Dan Barnett at 8:08 PM No comments: