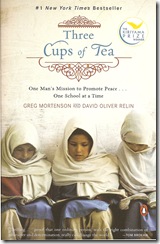 The Karakoram Highway (KKH) in Northern Pakistan "is one of the most daunting engineering projects humans have ever attempted. Hewing principally to the rugged Indus River Gorge, the KKH has cost the life of one road worker for each if its four hundred kilometers."

Named after the nearby Karakoram Range (giving the letter designation to one of its mountains, K2, the second highest peak in the world), the highway project forms a starting contrast to a very small, very quiet, but in some ways equally daunting project undertaken by mountaineer Greg Mortenson: The construction of a school, for boys and especially for girls, in a little village in the Baltistan area of Northern Pakistan.

The true story is told in "Three Cups of Tea: One Man's Mission to Promote Peace . . . One School At a Time" ($15 in paperback from Penguin) by Mortenson and David Oliver Relin. Mortenson's co-author spent two years interviewing many who touched his life; he found a life that touched many others in its single-minded determination to make a quality education (and actual school rooms) available to village children living at the edge of existence.

In advance of Mortenson's April appearance in Chico, Chico State University (www.csuchico.edu/bic) and Butte College (www.butte.edu/bic) have designated "Three Cups of Tea" as the "Book in Common"; other community organizations are also starting discussion groups and the E-R will be archiving stories dedicated to Mortenson's work.

Tragedy and failure have haunted Mortenson's life. After his sister Christa died of a seizure on her twenty-third birthday Mortenson in 1993 wanted to place her necklace at the summit of K2, but he failed to reach the top. He got turned around in his descent and entered an unfamiliar village, Korphe, where he met Haji Ali, the village chief, who told him sharing the third cup of tea means "you join our family."

Mortenson promised to return and build a school, and the story (told in the third person) traces the circuitous route he took to keep that promise. Hounded by failure, then by success, Mortenson is complex: An infidel in a Muslim land who gained respect and love from religious authorities, whose vision of building schools continues today, and whose inner climb is the most inspiring of all.

Posted by Dan Barnett at 7:20 PM No comments:

Roger Aylworth on the wonderful world of widgets 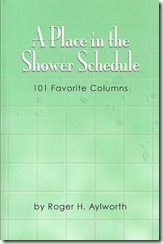 "When we were first married," longtime E-R columnist Roger Aylworth writes, "Susan and I agreed on a division of labor. Susan hates to iron men's shirts, and I am no great fan of dishwashing, so I agreed to take care of my shirts, and my bride took over the sink duties. In the long run this has meant that the dishes almost always sparkle, and I wear a lot of wrinkled shirts."

Such is life at "Casa Aylworth," and now fans of Aylworth's family humor column can revisit the bouncing brood of seven kids and two parents, and new readers can become fans. "A Place in the Shower Schedule: 101 Favorite Columns" ($16.95 in paperback from Delphi Books, www.DelphiBooks.com) chronicles the sometimes goofy events surrounding a man still smitten with "the saintly Susan" (whom he married in 1970) and the veritable plethora of "widgets" and "grand-widgets" who have made their entrance along the way.

The author writes about his column that "what I wanted to do is produce 'feel good' humor, situations where people would laugh with and not at other people. . . . With six sons and a daughter I realized I had an enormous reservoir of material."

The columns are loosely arranged by category, such as "On Being Roger" (in which the author finds that wearing a tuxedo to work can add "woo-whoo to the world"--even at his advanced age); widget wars (including the never-enacted "bottom-otomies" of recalcitrant widgets); and "Getting Fit" (wherein Aylworth realizes that his "body warranty" has expired).

There are also tales of animals (what happens when Flashy the hamster gnaws through a water line feeding the dishwasher, for instance) and encomiums to "the coolest truck in the whole, entire world!"--a vehicle the author christens "MAH TRUCK!"

Parenting never really ends, Aylworth observes, but it's "the capacity to enforce parental edicts that fades. I discovered a long time back that true parental power begins to disappear very early in the kid-dad relationship: Real control peaks the day before the little guy grabs the spoon in his own tiny fist and begins to shovel the mashed peas into his own mouth without help."

Readers will want to shovel in the columns in this warm, wise and wascally book.

Posted by Dan Barnett at 7:19 PM No comments:

Teardrops on parade from local photographer/writer 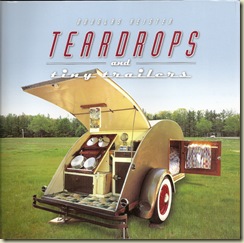 Chico's Doug Keister has a thing for "classic recreational vehicles"; his previous books include "Ready to Roll," "Silver Palaces," and "Mobile Mansions," all dealing with one form or another of vacation trailer. Now, with "Teardrops and Tiny Trailers" ($19.99 in hardcover from Gibbs Smith), Keister surveys "compact motorhomes and trailers."

The result is a book chock full of colorful interior and exteriors of teardrops, "canned hams" ("so called because their ovoid shape resembles a can of ham"), and glittery Airstreams. The cover shows a teardrop trailer built by the Gypsy Caravan Company of Bell, California, in 1937. The author notes that "fastidious care by a mere three owners during its lifetime has left this trailer in unrestored mint condition."

Teardrops became popular in the 1930s as do-it-yourself projects. Some teardrops were built from kits and conveniently had room for two--if you happened to be raccoons. But what the trailers lacked in space they made up in style. Keister shows dozens of restored trailers hitched to vintage cars. "Tiny trailers," he writes, "are a decorator's dream: a tidy well-defined space that seems to accept just about any stylistic ethos." There are blue ones and shiny ones, trailers that recall the Sixties, aircraft design, or an Arts and Crafts touch.

Canned hams reflected the teardrop style (though later the little teardrop came into its own with its aft kitchen) and became immensely popular in the 1950s, with their external styles "heavily influenced by the era's flamboyant automotive designs." Remember two-tone paint jobs and wraparound windshields, anyone? The makers of canned hams tried to make them cool, too.

The boler trailer (small "b") was created by a Canadian fiberglass septic tank developer. You can see where this is going. In the Sixties the compact fiberglass trailers, which looked sort of like bowler hats, hit the market. Though never wildly popular they were durable; some are still on the road.

The Airstream aluminum trailers got their start in the 1930s but are still popular; smaller Airstreams these days are marketed under the Bambi name. Keister also adds a chapter on the European love affair with tiny trailers, and there are two pages of online resources.

It's a fun book, and clear that tiny trailers are nothing less than portable personalities.

Posted by Dan Barnett at 7:10 PM No comments:

The origin of Orland's "Farm Sanctuary" 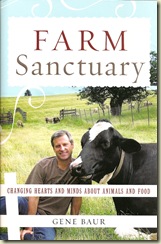 In 1985 Gene Baur worked at Greenpeace in Chicago, became a vegetarian, and (with his then-wife Lorri) founded Farm Sanctuary.

The story is told in "Farm Sanctuary: Changing Hearts and Minds About Animals and Food" ($25 in hardcover from Touchstone Books/Simon & Schuster). The organization focused on "downers," animals "down on the ground, unable to move on their own because they were sick, injured, or dying." Rather than tend to such animals or humanely euthanize them, which would be expensive, factory farms and stockyards routinely put them in the "dead pile"; sometimes such animals wound up in the food chain.

Farm Sanctuary volunteers photographed the abuses and in some cases removed ailing animals and restored them to health.

Eventually Farm Sanctuary relocated to a farm in Watkins Glen, in upstate New York, where victims of the factory farm system were named and nursed. Later, "one of our supporters, a professor at California State University, found available land suitable for a sanctuary near Orland . . . and donated about a hundred acres to us." Baur writes that the "Orland shelter has a visitors' center with an outdoor pavilion. . . . We've built barns and shelters where the animals can come and go as they please."

Actress Kim Basinger filmed a public service announcement on behalf of Farm Sanctuary featuring Henry the Holstein, "a frail baby calf" Baur rescued from "a crate at a calf ranch." Henry is now "a happy resident of the Orland shelter" and "weighs in at over two thousand pounds. He gets plenty of fresh air and grass to graze on."

Ultimately, Baur writes, "the best way to promote health, compassion, and sustainability is to adopt a vegan lifestyle. . . . Animal foods, including meat, milk, and eggs, waste vast resources and are inherently violent." But, he says, "if you continue eating meat and dairy products and you are concerned about animal welfare, then I hope you'll avoid factory-farmed meat, milk, and eggs."

The book is written in a quiet, reasonable tone (underplaying the controversy that has attended the work of Farm Sanctuary over the years), inviting the reader to consider that each farm animal "has a distinct personality as well as his or her own needs, fears, and desire to live."

Posted by Dan Barnett at 7:04 PM No comments: