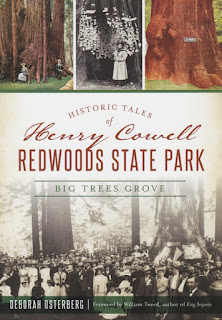 In the Santa Cruz mountains there's a forty-acre site, now part of the California State Parks system, that is home to old-growth redwoods; the tallest, at 277 feet, is about 1500 years old. Earlier this month, with the lifting of regional stay-at-home orders, parking and some campsites are again available (though the Visitor Center is closed and no tours are given as of this writing).

The origin of the Park is full of twists and turns, beginning in 1867 when a man named Joseph Warren Welch bought about 350 acres of "tall timber" in the area encompassing that grove of extraordinary trees. But instead of a massive logging operation, "Welch had another plan...."

Just what happened is detailed in "Historic Tales Of Henry Cowell Redwoods State Park: Big Trees Grove" ($21.99 in paperback from The History Press, historypress.com) by Deborah Osterberg. The Bonny Doon author is a Chico State grad, with degrees in history and geography, and was a volunteer docent at the Park starting in 2016.

With dozens of historic black-and-white photographs, some supplied by Special Collections at Chico State's Meriam Library, Osterberg tells the story from "the first stewards," the Native peoples, to 1954, when the Park officially opened (and which now includes more than 4600 acres with more than a million visitors a year).

An appendix lists the names of the Big Trees (including the General Fremont, a burned out stump large enough for indoor living); another provides a guide to some thirteen silent movies filmed amongst the Big Trees (including The Last Man On Earth in 1924: "An epidemic kills off all virile men except for one hermit. When he is discovered living in the Fremont Tree, every woman on the planet wants him").

The Welch family, and Henry Cowell, a rival who owned nearby land, were not interested in redwoods preservation but in the burgeoning tourism business. Osterberg's account is rich with detail, including the visit in 1891 by President Benjamin Harrison, which proved to be a PR bust when Harrison declared his visit personal with no pictures taken. 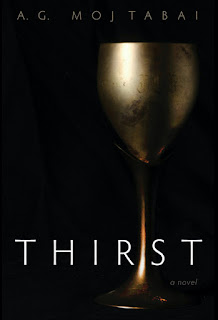 Former Paradise resident John Wilson, now living in the Chicago area, was a junior at Paradise High School when I was a sophomore. Later he became a consummate editor and book reviewer, so when he wrote in the journal First Things that a spare new novel by A.G. (Grace) Mojtabai is "one of the most memorable works of fiction I've read in the last decade" it was a recommendation I couldn't refuse.

Brooklyn-born in 1937, Mojtabai majored in philosophy and mathematics, taught at Harvard and the University of Tulsa, and lived for a time in Iran and Pakistan. She worked at a hospice in Amarillo, Texas.

Her new book fittingly arrives in this column a day before Ash Wednesday, observed by Christians in the West as the beginning of Lent, a time of penitence and prayer leading up to Easter.

"Thirst: A Novel" ($16 in paperback from Slant; also for Amazon Kindle) charts the final days of Father Theo, a lifelong priest serving a rural diocese in Texas. The nearby convent houses just seven sisters, all save Sister Perpetua ("the youngest of the group, somewhere in her fifties") "grown old in service here."

Theo is old as well. "He does not want to outlive himself," the narrator tells us. "His mind is made up.... Listen: the rattle of bare stalks, a shuffle of wings. It's time. He enters his house. He will not leave it again."

Lena, Theo's first cousin, is called in to help when the priest refuses to eat. Though Lena was steeped in Catholicism as she and Theo grew up in Texas, she later abandoned her faith. Yet, flying in from Chicago, now a widow, she senses a connection with Theo despite her frustration with his not eating, or drinking, and her discovery that he's given away most everything in his little cottage, including his precious books.

When Theo can no longer speak, "reaching for her hand, his fingers close on hers and hold on with an iron grasp." She later remembers his question to her growing up: "Is there a meaning to us?"

Mojtabai explores faith and doubt, commingled, in these two lives--mere ashes--yet thirsting for something more.

"Wildlife As Property Owners: A New Conception Of Animal Rights" 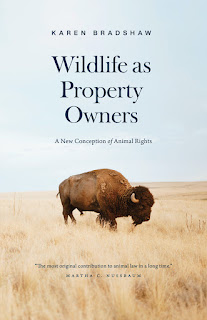 Ants set up home base. Butterflies chase rivals. Prairie dogs build family burrows. Your favorite cat is territorial. In effect, they claim certain property for themselves. That simple observation may lay the groundwork for protecting biodiversity even as climate change puts immense stress on ecosystems.

Karen Bradshaw, who graduated from Chico State in 2006, is now a Professor at the Sandra Day O'Connor College of Law at Arizona State University, and Senior Sustainability Scientist at the Global Institute of Sustainability and Innovation. Her new book argues for "Wildlife As Property Owners: A New Conception Of Animal Rights" ($27.50 in paperback from the University of Chicago Press; also for Amazon Kindle).

At first glance the notion seems absurd. Do animals actually think of themselves as property owners? Bradshaw rightly leaves that question to scientists and philosophers; instead, she asks the more practical question: "Should people consider animals as potential property owners?" Her book makes the case that not only is this not absurd, property law already has resources that can get us to "yes."

In property law, non-human entities, like corporations, can own things. Trustees oversee the property claims of domestic animals who have inherited an estate as well as others who are unable to act on their own.

Bradshaw's conception of animal property rights does not ascribe human rights to animals (a radical proposition) and broadens the scope of animal welfare laws to include entire biological ecosystems. Under her approach, "humans would retain the right to own pets, eat meat, or kill spiders."

Bradshaw sees many parallels in the animal kingdom to human property rights. "Property rights diminish the need to wake up each morning and fight to the death over where to eat and sleep.... The time and energy saved can be invested in other activities, such as catching prey or creating iPhones."

Communal rights develop among humans especially when resources are scarce, when no one individual can control the environment. It's the same in the animal world: "Lions always maintain territories with two watering holes" and so the pride must cooperate in their defense.

If Bradshaw's purpose is to convince a skeptic, she has succeeded.

"How To Prepare For Climate Change: A Practical Guide To Surviving The Chaos" 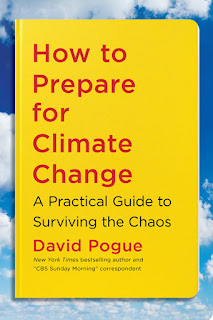 David Pogue reports on science and technology for CBS News' Sunday Morning. A prolific author, his new book, on climate change, is a stunningly complete yet readable compendium for individuals and families trying to navigate its real-world implications.

"How To Prepare For Climate Change: A Practical Guide To Surviving The Chaos" ($24 in paperback from Simon & Schuster; also for Amazon Kindle) has a Paradise connection. Pogue assembled an "expert panel," among them Steve "Woody" Culleton. The book notes that Culleton "arrived in Paradise in 1981 via Greyhound bus...."

Serving on the Town Council from 2004-2016, "Woody plans to run for town council again in November 2020 to help rebuild his community." He did, and now it can be told: he's back on the Council.

For Pogue, climate change is incontrovertible; the controversies about just how much is human caused are beside the point. Whether we as a species can mitigate or stop climate change, the real question for us as individuals, families and communities is how we can cope or adapt to the changes.

"Sometimes," he writes, "people are pushed out by extreme-weather disasters, like the wildfire that drove Bob and Linda Oslin out of Paradise.... They decided not to return."

Neither did Jen and Ryan Cashman of Paradise, driven out by the Camp Fire, who became "climate refugees." (Pogue tells their story for CBS Sunday Morning at http://bit.ly/paradisepogue.)

Where can one go that's safer? Pogue has an entire chapter with some sage advice for those seeking "climate havens": "Get away from the oceans"; "move north"; "find fresh water"; "seek infrastructure." Best bets: the Pacific Northwest and the Great Lakes states.

Pogue gets down to the nitty-gritty, with a section on emergency notification (and the heartbreak of the Camp Fire) along with a page on lessons from that fire: "Fill the tank."

Whether we stay or go, Pogue's must-have book will fill our information tank to the brim.