A compendium of local UFO sightings from an area writer 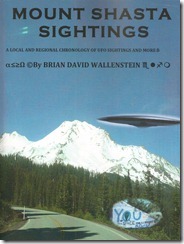 Mount Shasta resident Brian Wallenstein is not neutral about weird things. He was interviewed early last year by Lee Romney of the Los Angeles Times, who wrote that in 1987 Wallenstein "saw a family of Yeti emerge from an abandoned cabin on the mountain. He says a reversal of gravity on one grade often pulls his Subaru uphill. As for spacecraft, he's 'watched UFOs … head into the mountain.'" Living near Mt. Shasta, that mystical place, it's no surprise that Wallenstein would collect accounts of strange events from residents who witnessed them.

"Mount Shasta Sightings: A Local and Regional Chronology of UFO Sightings and More" ($29.99 in paperback from Universal Template) checks in at more than 600 pages. The bulk of the book compiles hundreds of sightings, many from the Chico area (such as witness to a "dark triangle shaped UFO" over Chico on May 25, 1996).

Introductory materials offer a brief history of some of the groups, ancient and modern, that have found the mountain a place of spiritual energy. As for human origins, Wallenstein asks, "why is it incomprehensible to consider, we have been genetically accelerated, when there is possible evidence to that effect?"

Humans, he writes, "are a synthesis of several Off-World races." But "with the blanket of secrecy our own shadow government has over disclosure," it is hard to make sense of the data. UFO and even Bigfoot sightings may be the evidence that we are "being groomed by what ever it is in this universe, to be civilization builders." Frankly, "it's obvious that the presence of Off-Worlders is in our midst."

But the government, he says, is hiding information, even putting out what seem like silly stories to discredit what may have more than a hint of the truth. Wallenstein writes that he was contacted by exopolitics.com to pass along information from someone at the Defense Advanced Research Project Agency (DARPA), to the effect that as a young boy President Obama "participated in a Space Camp in 1980, at the College of the Siskiyous preparing him for a journey he allegedly took to Mars from 'The Jump Room' located at a Hughes Aircraft facility in El Segundo...."

It is a worldview only the intrepid may wish to explore. 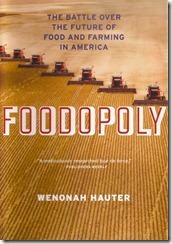 Virginia-based Wenonah Hauter owns a family farm run by her husband as a "community supported agriculture program." The longtime activist is Executive Director of Food and Water Watch and recently was invited to Chico for a book signing at Lyon Books, with her appearance sponsored by the Northern California Regional Land Trust (landconservation.org) and their "Buy Fresh, Buy Local, North Valley" program.

For Hauter, the U.S. "food system is in a crisis because of the way that food is produced and the consolidation and organization of the industry itself. ... Today, twenty food corporations produce most of the food eaten by Americans, even organic brands. Four large chains, including Walmart, control more than half of all grocery store sales."

The implications are detailed in "Foodopoly: The Battle Over The Future Of Food And Farming In America" ($26.95 in hardcover from The New Press; also available in Amazon Kindle and Barnes and Noble Nook e-book formats). Hauter explores how political clout from the big food companies has undermined safety standards, promoted factory farming and inhumane treatment of animals, and has unleashed genetic experimentation with inadequate safeguards. "The biotechnology industry," she maintains, "has become so powerful that it can literally buy public policy."

It's impossible, she says, to counter these influences by just buying local or ending farm subsidies (as if such subsidies were propping up only the biggest farming operations). Because USDA statistics inflate the number of small farms (counting operations where most of the income is non-farm), it appears that relatively few farms benefit from subsidies. The truth, Haunter says, is that "82 percent of midsize farmers depend on some support to stay afloat." End subsidies, and full-time family farms collapse, consolidating the food system even more.

Her solution is a "new paradigm" of political activism, based on seeing "the world as a global commons with collectively shared assets, from air, water, soil, and genetics to taxpayer-funded research, libraries, roads, and all of the other resources we share." The bottom line: "Our movement must deepen and expand the strategy for moving people to political action. It must join the broader progressive movement to organize across the country. ... There are no shortcuts to building the long-term political power to reclaim our food system, our democracy, our commons." 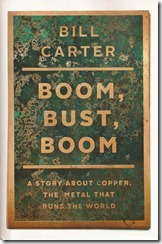 For Pleasant Valley High School grad Bill Carter, living since 2000 with his wife, Leigh, in the old mining town of Bisbee, Arizona, it begins with a backyard vegetable garden. Carter feasts on salads though Leigh, pregnant with the couple's second daughter, "doesn't trust the dirt."

Bisbee "is a dormant mining town, located eight miles from the Mexican border as the crow flies. The copper mine closed down more than thirty years ago, but the effects of its existence remain. Mine shafts pockmark the hillsides and sulfuric acid runoff stains the cliffs a burnt orange." Back in the day the mining company "took more than $8 billion in copper from this place. You don't take that much from the earth without leaving a scar or two."

Carter's account is told in "Boom, Bust, Boom: A Story About Copper, The Metal That Runs The World" ($26 in hardcover from Scribner; also available in Amazon Kindle and Barnes and Noble e-book formats).

Soon Carter is suffering stomach cramps, and worse. His wife and daughter have avoided the salads and are fine. Then he receives a letter from an environmental cleanup company, hired by the owner of the mining operations, that his backyard dirt is contaminated with arsenic.

The illness passes only to be replaced by intense curiosity. Carter details the dangers of copper mining, investigates the copper market, interviews mining CEOs and environmental protestors, charts the influence of big money on small communities, and discovers, as he says in an interview, that because of an 1872 law "the U.S. does not charge foreign companies for extracting copper on our public lands."

Carter's reportage takes him to active Arizona copper mines and to Alaska, "because there is talk of developing one of the world's biggest copper and gold mines near the watershed of Bristol Bay, which is home to the world's largest sockeye salmon run, with almost forty million fish returning every summer." It's called the Pebble mine.

Civilization runs on copper (the average house has "four hundred pounds of copper pipe and wiring") and Carter acknowledges he is caught in hypocrisy. Yet, as he says toward the end, "the battle to stop Pebble mine is really a battle to define what we believe is the sensible stewardship of our resources." 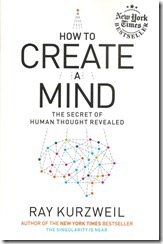 Scientist, inventor, author, futurist, and now Director of Engineering at Google, Ray Kurzweil is scheduled to appear at Chico State University's Laxson Auditorium this Friday as part of the President's Lecture Series. His multimedia presentation, followed by a book signing, begins at 7:30 p.m. on the topic "The Acceleration of Technology in the 21st Century: The Impact on Business, the Economy, and Society and How to Retain Our Humanity Through It.”

Kurzweil's newest book is "How To Create A Mind: The Secret Of Human Thought Revealed" ($27.95 in hardcover from Viking; also available in Amazon Kindle and Barnes and Noble Nook e-book formats). A pioneering inventor of text-to-speech and speech-to-text technologies, Kurzweil argues that the brain, specifically the neocortex (which is "responsible for perception, memory, and critical thinking") functions by pattern recognition.

Not only perception but thought itself are a hierarchy of simple patterns repeated again and again, just as a simple equation can produce infinitely varying fractals. Complex patterns can be reverse-engineered and duplicated in human-made computers. You don't need to copy the interactions of billions of neurons; all you need do is "identify readily understandable (and re-creatable) patterns in those cells and connections."

At the same time, information technologies are predictably evolving exponentially, so that by 2029 machines will be developed that "appear to be conscious. ... They will exhibit the full range of subtle, familiar emotional cues; they will make us laugh and cry; and they will get mad at us if we say they we don't believe that they are conscious." What Kurzweil calls his "leap of faith" is that such machines "will indeed constitute conscious persons."

That's because "consciousness is an emergent property of the overall pattern of an entity, not the substrate it runs on." We will never able to determine scientifically whether a nonbiological being knows what it's like to experience the color red; this is a philosophical question with "profound meaning to humans," what Kurzweil calls "spiritual." Thus, technological "evolution can then be viewed as a spiritual process in that it creates spiritual beings, that is, entities that are conscious." See the pattern?