The year in northstate writing

Memoirs were abundant in 2009. This column reviewed "We Suffered in Silence: How a Pastor's Family Lived in Shame while Hiding Dark Spots on the Clerical Collar" (Virginia and Bob Coombs); "Parking Meter Blues" (Debra Moon); "Bound For Africa: Cold War Fight Along the Zambezi" (Douglass H. Hubbard Jr.); "Saltwater Buddha: A Surfer's Quest To Find Zen On the Sea" (Jaimal Yogis); "Dreaming Of Wolves" (Anthony David Nicosia); "Hunters and the Dogs of Hunters I Have Known" (Dennis Lindberg).

Also: "Dancing Boots and Pigs' Feet: Memoir of a Refugee from the Hungarian Revolution of 1956" (Miklos Sajben); "Single Abroad: Tales of the Boyish Man" (Brian Ward); "I Played Too! Six-Man Football: A Collection of Memories From Those Who Played the Game and Lived In Rural America" (Dick Cory and friends); "Lift" (Rebecca K. O'Connor); and "The Pursuit of Happiness In Retirement: Outrunning the Reaper" (Harry and Norma Jean Pendery).

On the history front: "Black Bart: The Poet Bandit" (Gail L. Jenner and Lou Legerton); "The Look of the Elephant: The Westering Experience In the Words of Those Who Lived It 1841-1861" (Andrew and Joanne Hammond); and two books from Rian Farley, "Durham Honor Roll (Volume II): Military Service From 1946 - 2009" and "Nonpareils of Durham." 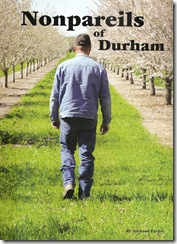 The Rev. James Patterson, who pastored the Durham Community United Methodist Church from 1972 until 2003, was instrumental in starting the first Durham community Christmas party. The 1973 celebration featured a live tree and a nativity donated by businesses, clubs and residents. As Karen S. Read notes in her article for the Friends of the Library Forum in 2007, "the baby Jesus was stolen two or three times and each time returned, but then several years ago the baby was set on fire and destroyed by vandals. A doll was used for several years, but a replacement lighted baby Jesus was procured in 2006." And so, in the midst of a world of woe, the Christmas story is told again.

The celebration is a gift of the Durham community, but those like James Patterson are gifts to Durham. He and 170 others are recognized for their exemplary contributions to the town in "Nonpareils of Durham," compiled by longtime Durham resident Adriana "Rian" Langerwerf Farley. (The spiral-bound paperback is available for $25 from Tozier's Hardware Store in Durham or directly from Farley at atfarley@att.net.)

Farley writes that her friend Norma Willadsen Munson came up with the title "for this book of biographies, as she said: 'Some 38% of almonds grown in California are the nonpareil variety.' At first I groaned, and then the name caught a life of its own. I muttered to all and sundry: 'Oh, Lord, they're going to think I wrote a book about nuts!'" ("Nonpareil" means "peerless.") Though Farley writes that the accounts cover only a sample of the town's role models, she notes that "many were named Parade Marshall, Woman of the Year, or were recognized by the Durham Friends of the Library Honors."

The alphabetical entries include Samuel Neal, the first settler in the area. He was involved in the Donner Party rescue in 1847; "Neal Road," contributor Larry Nagel writes, "was blazed as a route to summer pasture for his cattle." Farley herself is here, with her deep love of local history, as is her father, Mel Langerwerf, who, his eulogy says, gave Rian her "perfectionism." There's musician Sam Lasell and Durham High teacher Linda Sundquist Nassie. And many more.

The book is a tapestry of small-town America, a reminder that grace is still alive.

From a Chico area writer: A tale of love and politics in Guatemala 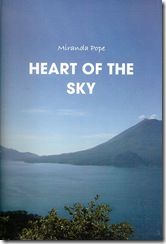 "There's something about Guatemala," Miranda Pope writes, "absolute beauty, and human warmth and dignity, along with poverty and trash, and the arduous, still-remaining vestiges of Guatemala's past." This is the setting of "Heart Of The Sky" ($15.99 in paperback from lulu.com), a land of contradictions against which a love story of contradictions plays itself out.

The author (aka Mira Talbott-Pope) writes me a quick note that she's been a "Chico/Cohasset resident for 30+ years and worked in social work and psychotherapy. Have been living in Guatemala for 3 years, currently at Lago Atitlan, volunteering in education. I have several projects (traditional murals, a preschool classroom) that I support there, and have given several benefits for same in Chico over the past number of years." The novel's central figure is really the country itself.

But there's a human story, too. Marilyn has come to Guatemala to volunteer in the schools; the trip was "a gift for her 50th birthday" from her son, something to pull "her out of the grieving period following her husband's sudden death." (She had divorced her first husband.) Marilyn falls in love with the place and, as a former therapist from California, finds her heart deeply moved by the needs of the poor and the continuing effects of the Guatemalan civil war; she laments the part played by U.S. intervention.

Then Marilyn meets Juan Carlos, muscular, perhaps in his mid-thirties, "a traditional Mayan farmer, yet knowledgeable about the outside world--a sensitive, thoughtful person. She senses the physical attraction she has felt all along expanding to something deeper. Embarrassed by the length of their gaze, her eyes drop."

The spark is kindled, and soon Marilyn is living with Juan Carlos and his family (his wife has left him) on his farm. Though the story weaves together the little joys of daily life and the affections of Juan Carlos, both Marilyn's feminism and Juan Carlos' traditionalism are constantly tested. "Certainly women have a right to enjoy sex and to have some say when it occurs," she tells her friend Natalie. "But I think there needs to be some balance between individuality and common goals."

Juan Carlos must open to a hidden past. And Marilyn? "Guatemala opened her heart." 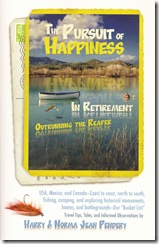 At first glance the book looks like some kind of financial planning guide. But "The Pursuit of Happiness In Retirement: Outrunning the Reaper" ($12.95 in paperback from Cold Tree Press) by Harry and Norma Jean Pendery is something else entirely. "This book," writes Harry, "is about our choices to spend our free retirement time with as many memories as we can amass until the bell tolls." (The volume is available at Lyon Books in Chico and directly from the authors at hnpendery@yahoo.com.)

Retirement came somewhat abruptly. "Norma Jean and I had a comfortable family medical practice," Harry says, where he was the attending physician. Then Harry found he had "cardiomyopathy with congestive heart failure. The arteries were normal, but much of the muscle was irreparably damaged. . . . Yes, there is treatment, but the prognosis (natural history) was grim--50 percent mortality in five years."

So Harry began to formulate his "bucket list." He wanted to see old friends and say goodbye. He is also a history aficionado, so "my second goal was to visit the landmarks and feel the pain of the War between the States to try to grasp for myself how such tragedy could occur." Finally, with fishing in his blood, "my goal was to fish for, and catch, every species of fish in the North American continent and in the adjacent seas."

Eight years later the couple has returned home, "our missions completed!" The book is a chronicle of those years, told mostly by Harry (with some insightful asides by Norma Jean) in an easy, conversational style.

On a lark, they bought at auction a "twenty-eight-foot, twin-engine Bayliner, with galley and sleeping for six" for $700. Little did they know why the craft went so cheaply. A friend noted, "a boat is a hole in the water, into which you pour money." The couple formed plenty of new friendships along the way in travels from coast to coast and into Mexico and Canada. They learned to eat soft-shell crabs whole ("body, legs, all") and survived a three-hour lightning and hail storm in Texas.

Throughout the years the couple's motto is to "care about and cherish others." "We are still outrunning the grim reaper," Harry writes, and their journeys are not yet finished.

A tale "romantic suspense" from an Oroville author 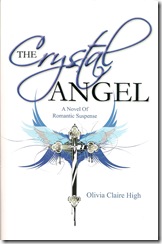 The heroine of Olivia Claire High's "The Crystal Angel" ($13.95 in paperback from Fireside Publications, www.FiresidePubs.com) is petite and stunningly beautiful. An interior designer based in Miami, Kemble Morgan might be called a "house whisperer": "I like to spend time in a house," she tells Archer Griffith, "to get the feel of each of the rooms before I know what they need."

The Oroville author will be signing copies of her book during a gathering of local writers at Lyon Books in Chico this Saturday from 2:00 - 4:00 p.m.

A few years before meeting Archer, Kemble had surprised a thief in her apartment. And now "an anxiety . . . crippled her emotions whenever a man tried to touch her"; but did she even want to respond to his advances? Well, yes: "He was a study in pure animal magnetism; all lean hard muscle. . . . She stood staring at him like a hungry piranha ready for a feast." But, no: Wasn't Griffith a "narcissistic womanizer," a high-flying businessman used to throwing away things and people when he became bored with them?

Throughout the novel misunderstanding begets misunderstanding until Kemble and Archer have no idea who is friend or foe. Kemble's widowed mother, Ginger, and Archer's business associates play key roles in the story that involves an expensive crystal angel, mysterious goings-on at the house, a kidnaping, a romantic rival, desperate escapes, and even murder.

But what about love? "Their hearts beat against each other with a madness born of desperation amid a mounting excitement that carried them to passion's zenith and back again. . . ." Careful: "I'll admit you made me want you," Kemble tells Archer moments later, "but it was strictly physical and had nothing to do with my mind."

But the reader's instincts know the story is not yet over.