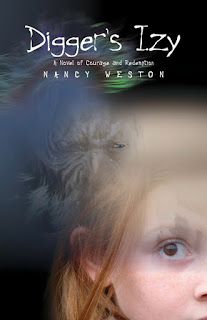 Until recently, local writer Nancy Weston has enjoyed a long career in professional management, from the aerospace industry to the medical device field. She helped craft processes to more effectively respond to crises, such as Butte County's 2008 fires.

Now, with her debut novel, Weston has turned her attention to a different kind of crisis, where a family must face the reality of a dad who is intellectually brilliant but also mentally ill. "Digger's Izy" ($14.95 in paperback from Weston Writes; also for Amazon Kindle) follows Isabella ("Izy") Reinhardt, born in Los Angeles in the late 1940s, "just at the dawn of madness."

Grandy, Izy's maternal grandmother, "was like a great oak tree, anchoring the land around it with roots, protecting with shade and shelter." Being around Grandy, who hailed from Scotland, was an opening into a rich family history and wise words Izy would never forget.

Izy's father, Gunter, had German roots. On good days he tutored his daughter and when she was eight brought home a model railroad kit. But there was little expression of love; on the contrary, Gunter found his daughter lacking in every way, telling his wife, Missy, "She eats like a pig. She is a pig. A brown-eyed pig!"

Though she tries to be a peacemaker, Izy finds herself, as the years slip by, joining disruptors at school. It is a time of racial conflict, assassinations, Cold War tensions, hostage taking, Watergate, the war in Vietnam, and the novel interweaves news of the day with the personal challenges Izy faces as she realizes her father is not just demanding, but dangerous.

Rejecting her mother's faith in God, Izy is nevertheless haunted by questions of meaning. This coming-of-age story follow's Izy's surprising rise as a scientist, her fight against discrimination, her father's sacrificial contribution to brain research. "My whole life has been about my father," Izy says. "He has been the single most overwhelming aspect of my life: A great light, warming me, blinding me, burning me, but always shining ahead to show me the way."

This first novel heralds the advent of a new talent and a new way for the author to make a difference in the world.

"From The Inside Quietly" 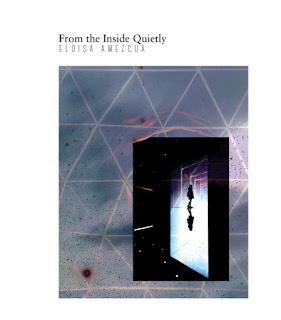 The eighth-annual WordSpring creative writing conference is Saturday, April 27, from 8:00 a.m. - 3:30 p.m. on the Butte College main campus with workshops on poetry, fiction, and cross-genre writing.

The keynote presenter is Eloisa Amezcua. Originally from Arizona, now living in Ohio, she has collected many of her poems in "From The Inside Quietly" ($12 in paperback from Shelterbelt Press, shelterbeltpress.org), an exploration of the inner life as both hard-edged and fragile.

Amezcua arranges her poems into four sections, each introduced by a poem about "E." "E Does Ballet" (and his called "chubby" by her mother); "E Goes To The Museum" ("the shark teeth tell stories/ she wants to learn by heart"); "E Walks Home: An Inner Monologue" ("wear nothing/ that clings to your shape/ be shapeless/ don't look scaredworriedpanicked/ don't look/ friendlyapproachableopen/ don't look back/ look natural...."); and "E Watches Mother Primp" ("trying on/ dress after dress/ stubborn/ as a tongue/ pressed/ to the roof/ of a mouth/ shut tight/ staring").

What travels through the poems is a growing sense that the poet does not have to remain silent in the face of fraught relationships with parents and lovers.

In "Teaching My Mother English Over The Phone," "she wants to know how/ a word can be both/ a thing and an action/ like war and mistake// although I can't put into words in Spanish/ how I know the difference/ so I tell her I have to go/ and I go/ and she goes/ I haven't taught her anything"; "On Not Screaming" introduces a sinister voice: "I told you/ to be quiet,/ he said,/ is to love/ me enough/ to let me in--// ... This is how I was/ taught to love:/ to silence yourself/ is to let the other in."

No. One may not see oneself clearly, but one can speak. In the "Self-Portrait" at the end, "I'm dangerous," the poet avers, "I'm a mirror./ I see everything/ except myself./ This way I can't/ lose: even when// broken, a polished/ surface reflects/ whatever looks in."

"Critical Thinking Enablers: The Skills Of Fact Finding And Taking Back Science" 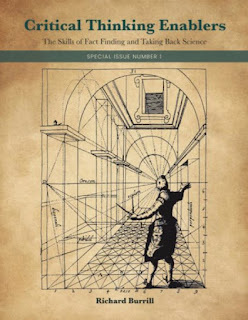 Independent scholar Richard Burrill is perhaps best known for a series of anthropological forays, through big books and public presentations, into the life and times of Ishi (ishifacts.com), the last living member of the Yahi people (he died in 1916).

Burrill is now developing a new project which has a far larger aim, to prepare Americans for the 250th anniversary of the country's founding, in 2026 (journeyintoamerica2026.com). He is self-publishing a series of books designed to improve cultural literacy; as his website says, "Imagine a majority of Americans who are informed throughout the land with shared knowledge about America’s diverse peoples, its traditions, its stories, the metaphors we live by...."

The first is called "Critical Thinking Enablers: The Skills Of Fact Finding And Taking Back Science" ($20 in paperback from The Anthro Company Press, journeyintoamerica2026.com). Readers can call (530) 809-2451 for more information. The book, or "syllabus," "is designed to help the people value knowledge in order to think critically and be informed, as best we can to direct our government who serve us."

The two sections (on fact-finding and how science works) contain a total of sixteen chapters intended for individual learners or seminar groups. The "enablers" in each chapter, often with an anthropological focus, form an eclectic collection of historical investigations, puzzles, illustrated lectures, discussion starters, and a thirteen-page critical thinking glossary.

Topics include distinguishing primary from secondary sources, recognizing propaganda, scientific thinking, and mastering numbers. They're not the last word, but rather fun and interesting jumping off points for further exploration.

The bottom line, Burrill says, is to develop in learners what Ernest Hemingway called (when asked what a great writer needed) "a built-in, shockproof crap detector."

The session is scheduled for Thursday, March 28 from 2:15-3:00 p.m. on campus. For more information on the two-day conference, and to register, visit bit.ly/csucsustainability; one day admission is $35, a two-day pass is $50, with free admission for all students.

"Peter Lassen: The True Story Of A Danish Pioneer In California" 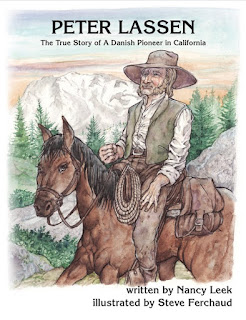 Retired librarian Nancy Leek of Chico continues her series of Golden State Biographies for children with the story of one of John Bidwell's compatriots. Illustrated by the inimitable Steve Ferchaud, the book is called "Peter Lassen: The True Story Of A Danish Pioneer In California" ($15.95 in paperback from Goldfields Books, goldfieldsbooks.com).

It's available locally at Bidwell Mansion, ABC Books, Made in Chico, and at anchr.org, the site of the Association for Northern California Historical Research.

Leek evokes a man always on the move. "Born in Denmark in 1800," she writes, Lassen "was thirty years old when he decided to travel to America. ... He didn’t speak English. He didn’t know where he would go or what he would do. But an independent spirit and a love of adventure took him ... to a land of beauty and opportunity called California."

He first landed in Boston, but the crowds were too much. He wouldn't settle in Missouri, either, because the frontier called out. Eventually, with Mexico's permission, he plied his blacksmith trade at Sutter's Fort, where he met Bidwell. But he wanted his own ranch, so he "chose a piece of land along Deer Creek."

"Many of the Indians living in northeastern California were Paiutes. Peter had usually gotten along well with Indians. Numaga (also known as Young Winnemucca) was the chief of a Paiute band. He and Peter became friends. They trusted each other. Peter was successful in settling disputes between the Indians and the settlers."

Wanting to invite others from Missouri to join him, he found a new route to California. In the meantime gold fever was in full swing and when he returned most of the workers had left. By 1850 he had left, too, wandering the mountains.

Lassen then set out for Nevada in 1859 with two other men in search of silver. Peter and one of his companions were shot and killed under still-mysterious circumstances.

Stubborn but good-hearted "Old Pete" was gone. But, as Leek's book attests, his legacy remains.