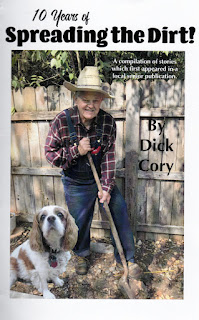 Remember when telephones had operators? Chicoan Dick Cory does. "Fern was the operator in our rural community of Alexandria, Nebraska, population around two hundred fifty in the late nineteen forties and fifties. She efficiently kept everyone in touch. Her knowledge of where people might 'hang-out' helped make connections when they couldn't be reached by phone. Ike Bowker and I were hired for a nickel to 'run them down' when an urgent call was waiting."

Cory is a retired junior high teacher, proponent of the revitalization of Teichert Ponds, and long-time columnist for a local seniors publication. The columns form the basis of a massive new collection called "10 Years Of Spreading The Dirt!" ($30, spiral-bound, self-published, available at Made in Chico or from the author at ubangarang@yahoo.com).

The more than 130 pieces, including poetry, date from 2008 to 2017, dedicated to "Ruthie Crane and our collective merging families" and to "those directly affected by the Camp Fire of 2018." (A portion of the proceeds from the book and Crane's paintings will help the Covered Bridge restoration project.)

About his email address: "Most of my ex-students remember me as the chief preserver of the ficmythicus ubangarang," an endangered species (ahem) that has become his trademark.

About small town cafés: "Many of these rural communities have lost their newspaper.... Stories, gossip, and serious decisions are made hand-to-mouth (excuse the pun) at these cafés. These cafés take the place of town halls and civic centers."

Dirt (he loves dirt!) plays an active role in Cory's life. In the 1970s he created a company to do the dusty job of hand knocking almonds, calling it Knutes Kneighborly Knut Knockers. "Being too clean can be a sign of poor work habits." So there!

He closes the book with tributes to his mother and father. "I am thankful for being born to caring parents late in their lives at a time and place making me a member of the luckiest generation."

Like the telephone operator of old, Cory chases down memories and makes connections, bringing small-town wisdom and not necessarily politically correct observations to illuminate life in the twenty-first century. Readers will find him a genial companion. 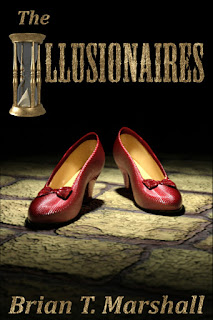 "As he passes through Redding he can still see them. The leftovers from his little outing. Blinking traffic signals, and darkened storefronts, and utility trucks on the move. He hadn't meant to cause this chaos. Hadn't known he even could. Only now is he feeling the ripples he'd left; the spoiled food, the fender benders, the missed appointments and disrupted lives."

Welcome to the alt history/fantasy world of "The Illusionaires" ($12 in paperback from missppelled press; also for Amazon Kindle) by Brian T. Marshall. For the Ridge-area writer the world in his newest novel is our own, the power outages real, save for their cause: magic.

Marshall has crafted a world where spells work and magicians with various Talents (like the ability to conjure flying monkeys or mind-mess with electromagnetic radiation) are represented by the Sorcerers Guild.

But the Guild is corrupt, and in 1938 stage magician Richard Constairs forsakes his dwindling audiences and travels to Hollywood, offering Louis B. Mayer his services as special effects wizard for a movie in production called The Wizard of Oz. Constairs wants to break the Guild's sweet deal with MGM by creating a new group called The Illusionaires.

Dangerous business indeed. There is a dark, perhaps unworldly, force behind the Guild, constantly seeking--something, and it's not pleased with Constairs. And how to bring together for the good of all a bunch of vain and self-promoting magicians who lie for a living?

Constairs is far from a model human himself. After a one-night-stand with his stage partner, knife-throwing Karla Livotski, he is befriended by Charlie, the Invisible Boy, goodness personified until Constairs' bumbling attempts to escape the bad guys causes Charlie to kill a man.

All of this has consequences as the lives of the characters intertwine. Over time, with "hoopla and hype," Constairs convinces the public "that magicians really could do just about anything. Cure cancer. Right wrongs. Get rid of that bathtub ring." But then--what really happens in the assassination of JFK? What happens to Apollo 11 as it heads for the moon?

And always that question: In order to fight Evil, must one become evil? In answer, Marshall the novelist offers a bravura performance. 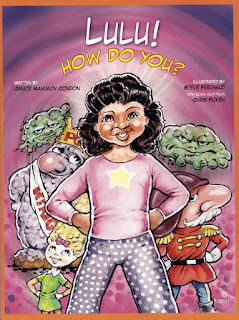 When first we visited Lulu, her stomach ache (too much cake?) led to a strange dream in which she climbed inside herself and learned the outworkings of digestion, so to speak. She meets plenty of new friends along the way, all detailed in "Ewww! Lulu Meets The King Of Poo."

Now Lulu is back, a bit older, but even though she's tried to eat what's healthy she also gobbled a bunch of fluorescent gummy worms and now has a tummy ache. Since her earlier dream ended with a sneeze, she sneezes backwards ("Choo-Ah!") and she's back in dreamland where she meets her pal, Emily Enzyme. Her adventures play out in graphic novel format, for kids eight and above, courtesy of Chicoan Jan Condon and friends.

"Lulu! How Do You?" ($9.95 in paperback, self-published), is conceived and written by Janice Maximov Condon (janmaxcon.com), illustrated by Steve Ferchaud, with character design and production by Chris Ficken. The emphasis is on learning about gut microbes--and being kind to them.

In Lulu's dream, all talk is in rhyme, not just some of the time. She meets Louie Liver, the "deliverer": "Those worms you ate at the end of your meal ... are not real food ... and not a good deal.... When you eat toxins what a risk it poses. It could make you ill from your head to your toeses."

Pammy Pancreas chimes in as do the Kidney brothers, Lefty and Righty ("we make your urine daily and nightly"). Ferchaud's colorful drawings show how everyone really likes what they're doing so long as they don't have to fight against the bad stuff, primarily sugary things, as Abby Acidophilus says ("If you eat lots of sweets, bad microbes attack us. They ruin our hula! They really do whack us").

Condon writes in an author's note that she joined a Chico group following the nutrition principles of the Weston A. Price Foundation (westonaprice.org) "which changed the direction of my life." An occupational therapist, Condon has a "passion to share my knowledge of gut microbes and healthy food choices."

Right eating is, well, nothing to sneeze at.

"Between Rock And Hard Places: A Mike McMahon Mystery" 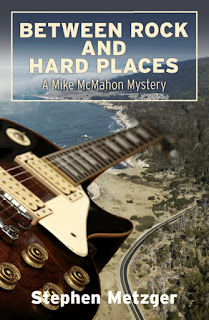 Do you remember the Johnny Sands Band? Mid-70s? The "Time of Sands" CD? According to Chicoan Steve Metzger (who taught writing and literature for many years at Chico State and composition at Butte College), the band "was one of the country's most popular rock 'n' roll bands ... playing scorching southern rock a la Lynyrd Skynyrd and the Allman Brothers...." Johnny himself was a "brilliant songwriter and singer"--you don't remember?

Well, the story is all there in Metzger's new novel, "Between Rock And Hard Places: A Mike McMahon Mystery" ($15 in paperback from Stansbury Publishing, heidelberggraphics.com/Stansbury%20Publishing/between_rock_ord.htm; also for Amazon Kindle).

McMahon remembers; after all, aside from being a private investigator, these days he teaches rock 'n' roll history at Marin Community College. He has an on-again, off-again relationship with Becka Goldberg, who teaches Anglo-Saxon lit at SF State, and he is apt to evidence his love of wordplay at inappropriate times, but otherwise he is busy narrating the novel, minding his own business (actually, his job is minding other people's business, but that is to get ahead of ourselves), when Jimmy Rooney's recent widow pays him a visit.

Jimmy was the band's drummer; he'd been working on a tell-all book about the group when, on his way to deliver the finished manuscript to the post office, he suffered a cardiac arrest and drove off a cliff and died. Authorities chalked it up as an accident, but Sarah Rooney, now in her mid-sixties, is convinced it was murder. After all, Jimmy's office computer, with an electronic copy, had been stolen.

What was in that book?

What follows is McMahon's unraveling of what turns out to be a twisted plot stretching all the way back to the band's demise when Johnny is killed in a plane crash on July 16, 1976 after a concert that very night. Along the way we observe McMahon's penchant for Sierra Nevada Pale Ale, his meeting with others associated with the band and its money, and the threat to his own life.

The fun never ends, especially with a narrator who uses "lots of sentence fragments. Effectively. If sometimes unnecessarily."