Will there be a mouse in the house? 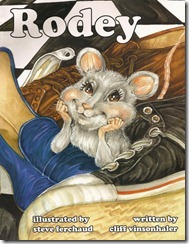 At the urging of his wife Deni Jo, Cliff Vinsonhaler is writing down some of the stories he's told over the years to his kids and grandkids. One might say that the Chico real estate broker has created some unreal estate in his fanciful tales of kids and animals, and if the first book in the planned series is any indication, readers will find continuing delight.

"Rodey" ($11.99 in paperback from Vinsonhaler Publishing, myrodey.com), available at Lyon Books in Chico, comes packed with full-color illustrations from the irrepressible Steve Ferchaud of Paradise. Vinsonhaler's stories, says his website, "most of which are still in his head, have no moral or hidden meaning. What they do depict is old fashioned fun and entertainment."

Rodey is a field mouse who "wanted to live in the grand two-story house where a little boy named Benjamin lived." Wouldn't you know it, though--there was no place for a mouse to get in. (We should all be so lucky.) So Rodey hatches a plan. He spots Ben's shoes lying in the grass and figures if he hides in one of the shoes he'll be carried inside when Ben's mom comes to retrieve them ("like she had always done before").

But the best-laid plans of mice and men.... Ben himself came out and put on his shoes. "Benjamin said, 'Mom, I think I need new shoes because one of them shrunk.' Well he didn't know it, but his mother was going to buy new shoes for him that very day."

The heart of the book is the meeting with Mrs. Lace, a rather matronly woman who had just started working at the shoe store. Ben tosses his shoes on the floor, and Rodey "fell out of the shoe, conked his head and passed out right onto Mrs. Lace's foot. She looked down at the mouse and screamed, and in the excitement flung her foot so high in the air ... that Rodey flew right over and onto the top of the store manager's head, Mr. Horn. Well, guess what? No one ever knew it, but Mr. Horn wore a toupee." Can you see where this is going?

The text and pictures will have kids laughing out loud. At least this kid did.

Graceful communication from a Chico writer 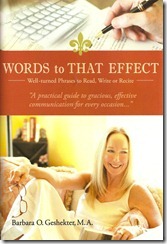 When it comes time to apologize to a colleague, what are the right words? When you need to offer condolences, or break up with someone, clear up a billing error, or respond to a verbal jab, what should you say? Barbara O. Geshekter, Chico-based consultant and self-described lover-of-words, has long pondered these questions. Her answers are now available in "Words To That Effect: Well-Turned Phrases To Read, Write Or Recite" ($24.95 in hardcover from Pale Ink Press of Chico at barbarageshekter.com).

Though the book's many examples can be used in email or even spoken out loud, Geshekter writes that "even in its humblest form, paper power is inestimable. Think of the Academy Awards. All the nominees have been announced. The camera pans back to the presenters on stage. They hold a heavy, ivory colored card, secured with a glimmering, gold seal and red ribbon (at least that's what I imagine they hold). And the winner is ... anyone lucky enough to receive one of your thoughtful, handwritten communiqués." Postcards, she adds, are like Twitter in physical form.

The book opens with reflections on the importance of clear thinking. "No matter ... how vested you are in the outcome of a legitimate grievance," she says, "if you can find a way to express yourself without acrimony it's a positive and liberating experience." Her aim in the book is to provide just the right words so that the reader says, "That's it. That's exactly what I want to say."

Geshekter discusses several personality types and how to help them "hear" you. She notes that while "less is more" in communicating with men, with women, "more is more ... more words, more feelings, more often." Are you listening, guys?

Each chapter includes "talking points" (pithy observations on the topic) and "well-turned phrases" that can easily be adapted. In writing a note to someone whose life circumstances have dramatically changed, she notes that "to avoid any overtones of schadenfreude, refrain from making comparisons--good or bad--about yourself or others. Nobody will feel better to know that your Uncle Peter filed for bankruptcy four times."

The book includes lined pages for jotting down favorite phrases and important dates. It's a practical guide that's fun to read.

To the author: Thank you.

Former Chico resident on how to stay married to a cop 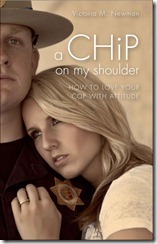 "My family and I moved to Chico in 1973," writes Victoria Newman. "I was enrolled in John McManus Elementary, when in 4th grade, Mrs. Carroll told my mother in a teacher's conference that I had a talent for writing." Now, after marriage to a California Highway Patrol officer and four children, Newman brings that talent to fruition with "A CHiP On My Shoulder: How To Love Your Cop With Attitude" ($13.99 in paperback from Tate Publishing; also available in Amazon Kindle and Barnes and Noble Nook e-book formats).

Written from the perspective of an officer's wife, the book is a comprehensive, insightful and honest how-to guide that will benefit any law enforcement spouse. Newman draws on her own marriage (the family now lives in Southern California where her husband Brent works) as well as interviews with dozens of other officers' wives. "It took me years to understand that when my husband puts on his uniform and weaponry, he has to put on his mind armor as well. What he does requires body and mind, even a little of his soul." It's not the time for idle chatter.

"I've had a CHiP on my shoulder for over two decades now. We've had a wild and crazy adventure with twists and turns and some seasons I don't care to repeat. ... I love him more now than in those early days. But that love didn't grow without choosing my attitudes carefully. I'd say this is the key to the success of our marriage and the heart of this book."

Newman had to learn to "hold down the fort" when her husband wasn't available, but she also provides a cautionary note. "We married rescuers. Our guys want to be needed. We must keep this in mind, making sure that we don't become so independent that we cease to need them. I'm talking about balance here, and there is no formula." This wise book, and its associated website (how2loveyourcop.com), cover communication, emotions, building a support system, coping when hard times come, money and marriage, sex and marriage, and kids.

And "growing old together."

This business of death 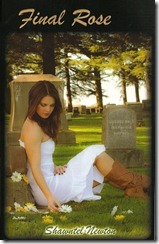 When Shawntel Newton appeared on The Bachelor a few seasons ago she brought her date home to Chico to meet her kinfolk and to tour the family business. "I wanted to be sure," she writes, "he was comfortable enough to marry someone who's a funeral director and embalmer. I know, I know, I know, what was I thinking? Well, I was thinking that the situation we were already in was hard enough. I had been on this soul-searching journey to fall in love. I was vulnerable, tired, scared and excited all at the time time."

After seven or so weeks in production, the reality show came to an end, and so did Shawntel's hope. Though made-for-tv, such programs have real life consequences. She recounts a time of grief but also a growing sense of new opportunities arising, opportunities to share her own heart as a confident yet very human twenty-something woman, but also--and most especially--to talk about her chosen profession. She tells her story in "Final Rose" ($14.95 in paperback from Memoir Books, an imprint of Chico's Heidelberg Graphics). My thanks to Lyon Books in Chico for a review copy.

Born and raised in Chico, the oldest daughter of Ric and Colene Newton, sister to Destiny and Vanessa, Shawntel remembers taking the Myers-Briggs personality test, hitting the "results" button on the computer, and reading "funeral director" on the screen. "Is God playing a joke on me? Did my dad rig this computer? I literally walked to my dorm dumfounded."

Through a number of relationships that didn't quite work out (especially with that one "gassy" guy), Shawntel continues her studies, helping the reader better understand the "business of death" not only from the technical side (pathology, microbiology and more) but the human side as well. Babies die, and so do friends. People die in violent acts and in old age. There are poignant experiences here. "The stories I have shared are difficult and hard," she says, "but also rewarding. I am with families during one of the most crucial times during their life and guide them through not only funeral arrangements, but also the healing process."

Such healing reflects an Easter hope, that one day all things will be put right--and funeral directors won't have any work. 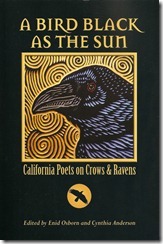 This afternoon at 1:00 p.m. Lyon Books in Chico is hosting four poets, each a contributor to "A Bird Black As The Sun: California Poets On Crows and Ravens" ($15 in paperback from Green Poet Press). Edited by Enid Osborn and Cynthia Anderson, the book includes submissions from dozens of writers and, of course, is causing considerable flap in the world of poetry. A whole book dedicated to a bird? Oh, yes.

"One characteristic that sets corvidae apart from other birds," write the editors, "is their ability to individuate and surprise. We could say the same about the California poets who fill these pages. We hope this anthology gives you, the reader, caws to celebrate."

Each section, as the crow flies, traverses some aspect of the bird: An awakener, enigma, muse, beloved, omen, presence, likeness, messenger, night-bringer and, less we forget the first aviatricks, a joker.

One of the invited poets at today's reading hails from Gilroy. Rochelle Arellano, in "Modern," tells of one who "had stopped believing / in omens, choosing instead to be / startled, then amused, by a raven, / clumsy over its dead, that she swerved / to avoid in the middle of the road." But there is more to the story.

Lara Gularte, the assistant poetry editor for Narrative magazine, writes of "Finding the Sacred," picturing "Crows on a church roof, / a ring of ancestors chanting."

Susan Kelly-DeWitt, featured on The Writer's Almanac and author of "The Fortunate Islands," evokes "Crows At Evening": "Twilights I see them / thick as brambles / of wild grape; // a black smoke of them, a coil / of black wires; a royal black / highway paved with feathers."

Patricia Wellingham-Jones, author of the award-winning "End-Cycle: Poems About Caregiving," finds a messenger. In "A Raven Rides His Shoulder," "He pushes his tired body / behind the wheel of this '89 Chevy truck, / drives to his second full-time / job of the day. // Last week / his 83-year-old mother died. // Guilt digs in its claws / like a raven riding his shoulder. / He okays the $600 in flowers that smell / decayed before the funeral begins." Later, though, the raven brings another message, something of hope.

This is a book to feed the ravenous.