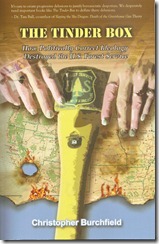 The mission of the U.S. Forest Service is the management of almost 200 million acres of timberland. According to Christopher Burchfield, who worked for the agency, that mission has been systematically undermined since the late 1970s. "In 1973," he writes, "Gene C. Bernardi, a female U.S. Forest Service research sociologist, filed a class action lawsuit charging the agency with sex discrimination. In 1979 the Forest Service entered into a consent decree with the plaintiff."

Burchfield sifted through thirty-seven boxes of "letters, reports, directives and minutes of meetings" at the Federal Records Storage Center in San Bruno, all relating to the civil suit. The result of his investigations, which include interviews with current and former Forest Service employees affected by the consent decree, is "The Tinder Box: How Politically Correct Ideology Destroyed the U.S. Forest Service" ($27.95 in paperback from Stairway Press, www.stairwaypress.com; also available in Barnes and Noble Nook e-book format).

Burchfield is scheduled to sign copies of his book at Barnes and Noble in Chico this Thursday, October 4, at 6:30 p.m. An interview with the author, conducted by Nancy Wiegman of Nancy's Bookshelf on KCHO (Northstate Public Radio, 91.7 FM) is available at http://goo.gl/uOWm4.

As the effect of the Bernardi consent decree began to radiate outward, Burchfield contends, more and more qualified men were passed over in favor of a misguided egalitarianism, putting women into positions for which they were psychologically and physically unqualified. Merit promotion was undermined and the agency was beset by legal challenges to its policies.

In 1999, after he started working for the Mendocino National Forest, Burchfield concluded "that the U.S. Forest Service's effort to reach gender parity in all professions and grade levels had been an unmitigated disaster." The agency, he says, was "demoralized and utterly without a sense of mission," plagued by laziness, absenteeism, victimhood, and incompetence.

In 1986, Burchfield writes, for a time the "Forests began purchasing lightweight, single-ply fire hoses fifty feet in length with plastic fittings attached" so female firefighters could more easily handle them. But the hoses "had a propensity to kink, popped leaks by the score" and--melted.

"The Tinder Box" aims to explain "why, over the past twenty years, ninety million acres of American's wild lands have gone up in flames.
Posted by Dan Barnett at 9:00 PM No comments: 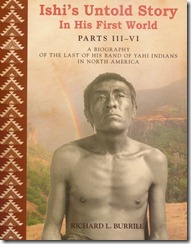 Local independent researcher Richard Burrill is in the midst of a multi-volume project detailing everything known about Ishi and his people. Newly published is "Ishi's Untold Story In His First World, Parts III-VI: A Biography Of The Last Of His Band Of Yahi Indians In North America" ($39.95 in paperback from The Anthro Company or ishifacts.com).

"Ishi," Burrill writes, "was likely born at the very end of 'Babies Born Time' (February), according to the Yahi calendar in the white man's year, 1854." A member of the Yahi, the only remaining members of the Yani people, he was taken into custody in Oroville in 1911, spent his remaining years at the Museum of Anthropology in the Bay Area, and died of tuberculosis in 1916.

But what of Ishi's "first world"? By the time Ishi was three, Burrill says, "a way of living that had spanned 3,000 years was ending. ... To learn about the First World is to learn about what was lost."

Burrill will be speaking at Lyon Books in Chico on Tuesday, September 25 at 7:00 p.m.

The author's book is packed with historical photographs, newspaper clippings and other documents, maps, timelines, reports of personal explorations, Yana creation myths, and more. Together they tell a story not only of what was lost, but of the "near genocide" of California tribes. Since documentary evidence of Ishi's growing up years is of course scant, Burrill relies on informed speculation. There is much more evidence of tribal massacres, such as the "1864 wholesale purge of the Yana in Shasta and Tehama counties by Whites of conservatively 500 native people ... one of the biggest massacres of American Indians in U.S. history."

The Yahi also had to contend with "roaming and pursued fugitive natives." In 1862-1863, "the Sacramento Valley and the foothills became a protracted war zone. The settlers continued to confuse Ishi's established Yahi/Yana band for the renegade 'Mill Creeks.'" "The Yahi, being distinctly more aboriginal-looking," were deemed most dangerous. Burrill also tells the story of the "Long Concealment," when the remaining Yahi went into hiding in 1870 for almost forty years.

The bottom line for Burrill: "Ishi's formidable legacy of integrity, hope, and courage serves as a symbol for change, calling for a more respectful and caring world today for all peoples."

A comic novel from a Butte College instructor 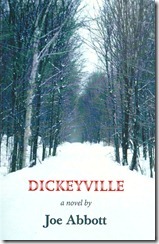 Consider 29-year-old Mat Roper. "Handsome, with shoulder-length blond hair and an ocean tan, the Californian looked like a king among the dour-eyed country folks and pale Midwestern collegians returning to farms for Christmas." Roper is on board a bus bound for Dickeyville, Wisconsin, to meet Daphne's family. Daphne Dickey, his fiancée, in the town named after her ancestors.

It's snowing, and very cold, and a strange old man on the bus seems overly talkative. You've got to understand the Midwest, says the man, by reading its writers. "Because it's like the winter insomnia, when it comes. Like a bare bulb swaying while a blizzard pounds your hundred-year-old farmhouse. Same place your Pappy and Ma was married and died in, buried in the family graveyard next to your grandmother and father. Same storm rages in your soul, son. Nor-wester of hunger and fear. ..."

So, Dickeyville, population 999, and Mat arrives just in time for Dickeyville Horror Days, a boar hunt of mythical proportions, hunting a boar of mythical proportions. "European wild boar," one local tells him. "A killer who runs to five hundred pounds, judging from the hoof prints. ... Most dangerous animal in North America" haunting the great Mazy forest wherein dwelt old Dead Alice and her witchy wiles.

Butte College language arts instructor Joe Abbott has created a strange and wondrous world in "Dickeyville" ($17.50 in paperback from Starhaven; also available in Amazon Kindle e-book format). Abbott will be signing copies of his book at a free literary event tomorrow night at 7:00 p.m. at Lyon Books in Chico.

There's Ma and Pa, Verne, Bascom, the well-endowed twins Twila and Cabella, Buster Hieman, and a cartload more: "Dickeyville hicks," Mat thinks. Yet he is "flummoxed by hayseed yokels." There's the boar hunt, and "angel dinosaur bones," all in the "little town with twisty streets and twisted jokes. ... Crazy beer-swilling hicks with muscles by Jake."

Part of the fun of the story is to see the Roper get hog-tied. And then some. Says Mat: "I feel like I stepped in a pile of Dickeyville."

"Dickeyville" is a comic novel rife with oddballs who are never quite what they seem. Abbott's radiant prose reminds us there are plenty of snow jobs to go around. 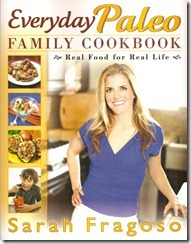 Sarah Fragoso came slowly to the Paleo lifestyle. Robb Wolf, of NorCal Strength and Conditioning in Chico, introduced her to the eating plan, but it wasn't until just a few years ago, after the birth of her third son, and plagued by a host of health issues, that she got serious. "I eventually committed to trying Paleo for thirty days," she writes, "and that was all the convincing I needed."

Now that her three kids, and husband John, have made the move to Paleo, Fragoso is spreading the word. First came "Everyday Paleo" and "Paleo Pals: Jimmy and the Carrot Rocket Ship," and now "Everyday Paleo Family Cookbook: Real Food for Real Life" ($29.95 in paperback from Victory Belt Publishing; also available in Amazon Kindle and Barnes and Noble Nook e-book formats). Replete with gorgeous full-color photographs by Michael J. Lang, the book is more than just a recipe collection. It's also a realistic guide to Paleo meals on a budget and what to put into the kids' lunch boxes, with more at everydaypaleo.com.

The transition to Paleo can be challenging. "If you grumble and gripe about no longer having cereal for breakfast, your little ones will, too." But "if you hand them a spatula and show them how to crack eggs as you laugh and giggle together, no one will miss the cereal."

Fragoso, a recent visitor to Lyon Books in Chico, draws on the main recipe section in creating helpful lists. There are 15 lunch box ideas, 15 "quick and simple" meals, a one-week meal plan and a week's shopping list. Recipe categories include sauces and dips, slow cooker recipes, soups and stews, "meaty meals," sides and salads, and fruity creations. Most of the recipes have a "something extra" section with creative variations.

And for an energy boost? There's even a recipe for "Rocket Fuel." 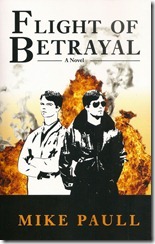 "Dentists," writes retired dentist Mike Paull, "have been represented many times in books and movies, but always as either villains or buffoons." So he invented Brett Raven who, like Paull, is also a pilot. "I decided the protagonist in a mystery novel does not need to be a lawyer, ex-cop or medical examiner. As long as he is smart, resourceful, and courageous, he can emerge from any field or any profession." Brett, as he is called, is certainly all of those things. His expertise is key in unraveling the fate of his former friend, fellow pilot, and financial advisor John Thomas (J.T.) Talbot. Readers won't be able to put the book down until all is revealed.

"Flight of Betrayal" ($15.99 in paperback from Skyhawk Publishing; also available in Amazon Kindle format) begins with horrendous news. J.T., though an expert pilot, crashes on his way home from a Baja fishing trip. "J.T. had been Brett's friend," Paull writes, "until he married Annie, Brett's ex-wife. They were still able to remain partners in the twin engine Beechcraft Baron, which they flew out of San Carlos, an airport located thirty miles south of San Francisco." The FAA called, Annie tells Brett. "There was a horrendous fire and both J.T. and his passenger were burned beyond recognition." The subsequent investigation would close the case as "pilot error." But Brett will not let go.

Mike Paull will be signing copies of his book Thursday, September 6, at 7:00 p.m. at the Chico Barnes and Noble bookstore.

Brett may want to take a bite out of crime, but as his own investigation proceeds he is confronted by some pretty shady (and dangerous) characters involved in the illegal trafficking of human organs from Mexico to the U.S. Then there's the story of Brett and Annie, the sundering of a marriage and the slow, tentative movement toward renewal. Brett is consumed with finding the truth but he also realizes how devastating it will be to Annie.

There are bad guys aplenty (with, shall we say, very limited vocabulary) standing in the way, and the reader takes delight as Brett (pilot and forensic dentist) gums up the works (so to speak). The tale is satisfyingly convoluted, the sex tender, the hero someone worth rooting for. It's great fun.